Turning over a new leaf: Agriculture programs team up to fight E. coli

Leafy greens farmers in the Santa Maria region who are interesting in participating in the food safety training program can contact Jeta Rudi Polloshka at jrudi@calpoly.edu or Erin Krier at erin.krier@hancockcollege.edu.

In the spring of 2018, an E. coli outbreak that was linked to contaminated romaine lettuce caused nearly 210 reported illnesses, 96 hospitalizations, and five deaths across 36 states. Just months after that outbreak was declared over, a different strain of E. coli spread across the nation—again through romaine—causing 62 reported illnesses and 25 hospitalizations in 16 states.

Now the country is amid yet another E. coli outbreak—this one linked to romaine lettuce grown in Salinas. 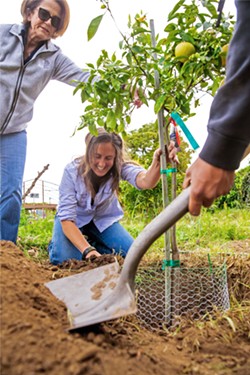 With hopes of minimizing romaine-associated illnesses in the future, agricultural professors and students at Cal Poly and Allan Hancock College are teaming up to develop and launch a food-safety training program specifically geared toward small-scale leafy greens farmers in the Santa Maria area.

"This is because we perceive that this group, due to documented language and cultural barriers, might face more of a challenge to understand and hence comply with regulations," said Cal Poly Agribusiness Professor Jeta Rudi Polloshka.

The two-year project is being funded by a $214,000 grant from the U.S. Department of Agriculture's National Institute of Food and Agriculture, Polloshka said, and will focus on providing Latino farmers of small and very small operations with the necessary tools to comply with federal food-safety regulations.

Although a number of E. coli outbreaks in years past have been linked back to large-scale farms—including one in 2018 that was associated with a prominent farm in Santa Maria—Polloshka said larger operations typically have a greater capacity to provide the food-safety tools and information that Hancock and Cal Poly hope to provide through this program. And as of January 2020, very small farms will be required to comply with the federal Food Safety Management Act for the first time.

Throughout the next two years, Polloshka said, Cal Poly and Hancock professors will teach about 40 students and farmers an interdisciplinary approach to food safety, following the Produce Safety Alliance (PSA) training model.

The first PSA-grower training is slated for Jan. 24, 2020, at Hancock, where Spanish translation will be available, and Polloshka said the team hopes to have about 20 farmers attend.

Students involved will vary throughout the project, but Polloshka said they'll be heavily involved in the program at nearly every stage, learning from hands-on experience.

"An important goal of our project is to raise food safety expert capacities in the state by giving students food safety experience," she wrote in an email to New Times, "and by getting them excited to pursue this field as a career."

Hancock professor Erin Krier said this project is crucial to helping very small farms—those with annual incomes of $25,000 to $250,000—adequately prepare for the complicated nature of the regulations and inspections associated with the Food Safety Management Act.

"Up until now, they haven't had to prove compliance with any of these regulations," Krier told New Times. "And there's a lot of them."

Krier said the legislation is complicated and often vague, and for small farmers who sell solely at farmers' markets and have two or three employees, it's going to be a big learning curve.

"They haven't been helped at all," Krier said. "And they're woefully unprepared because they don't have a whole food safety team like the big guys."