Parrish Family Vineyard produces cabernet sauvignon
from the Paso Robles, Adelaida District, and is dedicated
to crafting wine that represents the true varietal
characteristics farmed on their coastal-influenced family
vineyards in the preeminent Paso Robles region, including
the Creston and Templeton Districts. Through their
sustainability and philanthropic efforts, the winery works
to be a positive force in the wine world and local community.
For more information and updates on Adelaida Creek tours,
go to parrishvineyards.com.

In 2013, Parrish Family Vineyard owner/winemaker David Parrish noticed something funny at his Adelaida Vineyard, just beyond the vines. It was a faint, curving pattern at the bottom of a dusty slope.

Any winemaker worth his salt should know his land like the back of his sun-beaten hand. So, Parrish called in an expert to weigh in.

Enter local consulting biologist Brian Dugas, who pored over topography maps and confirmed that the subtle, linear dip Parrish had noticed below his boots was none other than a dried up creek bed.

Actually it was Adelaida Creek—or a ghost of its former glory, snaking through Parrish's newly acquired property west of Paso Robles. 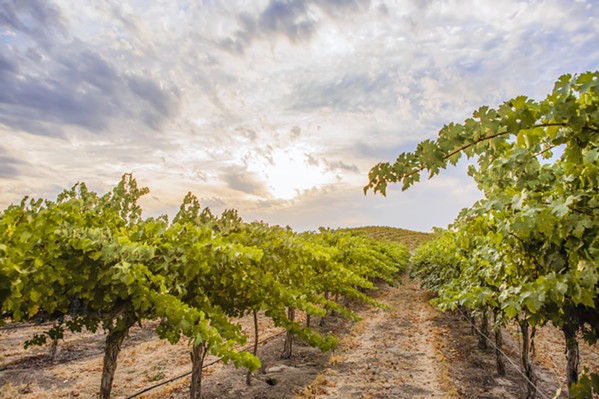 It was a stunning discovery. At the height of the California drought, there was not an ounce of moisture there, nor were there any native plants, or even birds. Although the site appeared far from lush, Parrish saw something else entirely.

He saw an opportunity to do better, to give back to the land that he hoped would bring him a good bounty, vintage after vintage.

"We were ecstatic when it was confirmed that we had a part of the original creek running through our property. We wanted to take every effort to restore it while preventing flooding in other areas," Parrish said.

See, that exact spot was discovered to be key headwater for the creek, and a real bummer for the city of Paso Robles. Overgrown with non-native weeds and practically bone dry, any water that passed through was liable to roll, or "sheet," directly into downtown Paso Robles, flooding the Paso Robles fairgrounds after every decent storm. 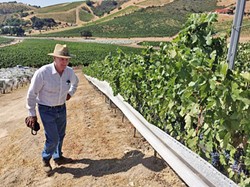 I've driven through that lake, and you probably have too.

Parrish knew that if the winery could rehabilitate the creek, he might not only alleviate this future problem, he could also significantly recharge the aquifer and replenish area wells with naturally captured rainfall. That water would otherwise end up overrunning the sewer drains down the line, so why not use it here—in rural Paso, where it was so direly needed?

So, the winemaker did something a little offbeat. He donated the 0.64 acres of creek and surrounding area to San Luis Obispo County. Then he worked with help from the county, the Upper Salinas-Las Tablas Resource Conservation District, and the county's Department of Environmental Programs.

Slowly—steadily—gloved hands and shovels cleared the section of land.

"I loved picking out the plants. We had around 200 to select and they included native blue oak and madrone trees and Santa Lucia Manzanita shrubs, which help slow and retain the water while recharging the aquifer," Parrish said. "Luckily, the California Conversation Corps and the American Watershed Stewardship volunteer program helped plant them. There were a lot of partners and agencies involved, so the timeline took a while, but at the end of the day, we were all excited that we were doing something to restore the land and improve our water situation."

A little while? Try five years.

A series of photographs taken from 2013 to 2018 show a stunning transformation: The entire area has blossomed from brown to green, and it's only getting greener thanks to recent spring showers.

The established native plants will serve as future habitat to a range of animals, including aquatic critters, insects, and birds. The vineyard's regular visitors—turkeys, owls, deer, and rabbits—are extra stoked to find water where before there was none.

"We are so thankful for all of this recent rain and that the creek has been restored to its natural habitat just in time," Parrish said. (In fact, I interviewed him on one of the stormiest days this March.)

This Earth Day, April 22, the winemaker said he encourages the community to be environmentally proactive and to be bold, not unlike like his grandpa before. 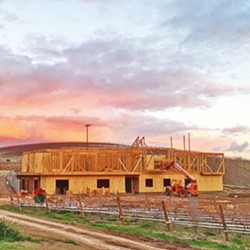 "My grandfather was one of the first people to plant grapes in Atascadero in the Great Depression and Prohibition era, and we've continued his passion of finding better ways to grow that are both good for the environment and the fruit," Parrish added. "This experience has taught us even more about the land and new ways we can take care of it for the betterment of the entire region. Seeing the creek flowing again, without flooding, has been so rewarding for all of us."

SLO County will start hosting tours of the creek later this year, and the winery will offer its own tours once Parrish Family Vineyard's new winery and tasting room opens this summer.

The creek will actually run through the entrance of the property, so there will be no way around telling this story of conservation to every person who walks through the door.

And after all, isn't that what all of this effort is about? Showing that one person—armed with a spark of concern and a hardworking team—can change the world for the better? What better way to lure these future world-changers than with a bold glass of Paso Robles cabernet sauvignon?

"We all need to pay more attention to the natural world around us," Parrish said. "We are often so lost on our phones that we aren't seeing what is directly at our feet." Δ

Hayley Thomas Cain is putting down her phone (for now). She can be reached at hthomas@newtimeslo.com.