It’s around 10:30 a.m. on a Saturday, Sept. 21, and I spy a man walking a turtle on a pink leash down Grand Avenue All week, my boyfriend Chase and I have giddily looked forward to the Turtle Organization of San Luis Obispo’s 22nd annual Turtle, Tortoise, and Reptile Show. So the sight of the enormous creature cruising up and down the sidewalk outside the Vets Hall glads our hearts. It’s our first turtle sighting of the day.

We pay the $3 admission and receive a turtle stamp from a man wearing a turtle hat, who tells us we can come in and out all day if we like. At a first glance, there seem to be three types of folks at the Turtle, Tortoise, and Reptile Show. First, there are the hardcore reptile lovers, a unique culture that surely contains multiple smaller subcultures within its ranks. They’ve got their turtle accessories; their turtle bling. Then there are the small children, who push their way to the front of the exhibits, eager to pet the tame alligators (notes after petting an alligator: squishier than you’d expect, but not at all unpleasant) and hold writhing snakes in their sticky little hands, proffering these to their squeamish parents, who make up the third demographic at a Turtle, Tortoise, and Reptile Show.

I soon lose track of how many times I hear, “Wow, honey, that’s great—Oh, no, no, no, ha-ha! Mommy’s just going to watch, thanks!” Then the kid responds with a wounded, pitiful “But he’s not slimy … .”

Chase, so used to accompanying me on various art excursions, was overjoyed to learn that the Turtle, Tortoise, and Reptile Show was indeed a show of live animals, and not an exhibit of art about turtles, as he had feared. 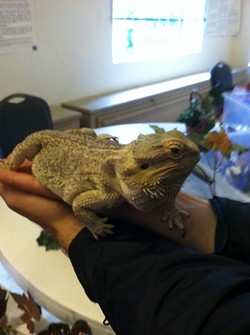 I may be the journalist here, but Chase holds the biology degree, and by the first exhibit he’s already outdoing me with the questions: What is the lifespan of the Desert Tortoise? Up to 80 years, it turns out. Where is the matamata native to? South America, we learn. The matamata, by the way, is awesome. It essentially looks like a cluster of waterlogged dead leaves.

I want to ask a turtle question, too. I see a tank of softshell turtles that look curiously like swimming pancakes. “Are they quite durable?” I ask the turtle expert, immediately regretting this choice of words. Durable? What am I, some sort of creep? Who asks if an animal is durable?

“Yes, their shells are actually quite … durable,” the man answers, with only the slightest pause.

We move on to the alligators. Woody, the smallest alligator, is two and a half years old. This guy has a ton of energy, and his human friend has to use both hands to keep him from racing off the table. Stuart, 26, is more laid back. Apparently he’s a former voice actor: His handler, Holly, says Stuart’s croaky voice stood in for that of a Velociraptor in Jurassic Park.

The biggest gator of all is a female named Grendel, who holds her mouth open, just so you don’t forget about her huge teeth. I didn’t get her age. A lady never tells. 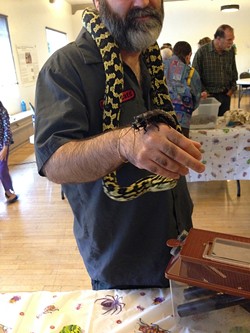 The snakes are next, followed by the insects. I pet an exotic kind of cockroach, which seems to shudder slightly at my touch. (“I can’t believe you did that,” says Chase.) The cockroach’s handler, Brian, deftly juggles an inquisitive python, which leers hungrily at the insect.

A volunteer named Natalie lets each of us hold a bearded dragon, and I’m surprised at the comfortable way mine settles into my hand, its little claws gently grasping my sleeve.

The Turtle, Tortoise, and Reptile Show also seems to be the place to bring any sort of strange pet. A tarantula? Hey, why not. There’s also an owl named Hooch, and several parrots. A woman named Debi lets Chase hold Nelson Mandela, her African Grey.

“He babbles all day at home, but he won’t talk in public,” Debi says.

Nelson Mandela has also been known to sing “Jingle Bells” and “Don’t Cry For Me, Argentina,” she adds.

Having made the rounds, I head home, certain of two things: 1.) I definitely want a bearded dragon OR an alligator OR a parrot for Christmas and 2.) I should really wash my hands.

For more information on the Turtle Organization of San Luis Obispo, visit tooslo.org.