The Central Coast Shakespeare Festival, featuring Twelfth Night and Treasure Island, runs through Aug. 3 at Filipponi Ranch in SLO. Tickets range from $12 to $20. Visit centralcoastshakespeare.org for tickets and more information. No outside alcohol is allowed. Twelfth Night runs two hours and 15 minutes, including intermission. Treasure Island runs 90 minutes, including intermission. Friday night performances include live music before the show from 6:45 to 7:15 p.m.

The Fourth of July tourists have finally left the beaches, and the weather is warm enough during the day to hit that breezy, perfect summer evening temperature. That's right: It's time for the annual Central Coast Shakespeare Festival.

Blankets and cash in hand for wine (and scrumptious fare from Beda's Biergarten), we made our way down the winding dirt road at Filipponi Ranch toward the amphitheater at the base of the hill while the sun was just starting to set for opening weekend of the festival, July 13. 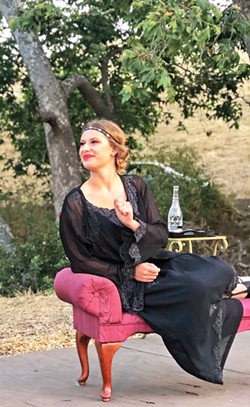 On tap this year is Shakespeare's Twelfth Night along with Treasure Island, shown on alternating nights through Aug. 3.

As the bard himself writes, "Nothing that is so, is so."

Twelfth Night is all about trickery, gender bending, and looking beneath the surface. A tragic shipwreck leaves twins Viola (Cassidy Cagney) and Sebastian (Isaac Capp) separated and each believing that the other is dead. So when Viola washes up on the shore of Illyria, she decides to masquerade as a young man named Cesario. She promptly falls in love with Duke Orsino (Will Pena), who is in love with the Countess Olivia (Claire Gretlein), who falls in love with Cesario, who is really Viola.

This is what you came for, folks.

The stars twinkled brighter and brighter above, and our bodies warmed with wine and laughter as we watched the lovers onstage slowly and hilariously work through the complicated web of he said, she said and mistaken identity. I couldn't help but agree: "Why, this is very midsummer madness." Δ

Arts Writer Ryah Cooley believes that brevity is the soul of wit. Contact her with a short note at rcooley@newtimesslo.com.