A multi-agency investigation launched in 2013 came to a dramatic conclusion on April 7 of this year, as law enforcement officers raided eight homes in the Nipomo area before dawn and arrested 12 San Luis Obispo County residents for alleged drug-trafficking activity. 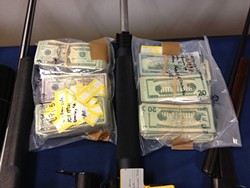 The effort—spearheaded by the FBI, the SLO County Sheriff’s Office, and the California Highway Patrol (and assisted by other local law enforcement)—was codenamed “Operation: All In The Family” because the alleged drug ring centered on one South County family, according to FBI spokesperson Laura Eimiller.

“This particular drug-trafficking organization—the Rocha family—had been conducting criminal activity in the area for quite a while,” Eimiller alleged to New Times. “If they’re convicted of these crimes, the sentencing penalties are extremely tough.”

In a press release announcing the arrests, the FBI alleged that members of the Rocha drug-trafficking organization conspired to “distribute high purity methamphetamine and other narcotics”—including cocaine and heroin—in both SLO and Santa Barbara counties.

Authorities were still seeking one defendant named in the indictment—Victor Speedy Gonzales, 36, of Nipomo—as of press time.

The defendants in “Operation: All In The Family” are set to be tried in U.S. District Court in Los Angeles.