I look up as it starts raining. Real rain droplets are falling, not just the weird heavy mist we sometimes get on the Central Coast. Seriously? It's June 2.

The one time I straighten my hair in months, and it rains. My friends and I huddle under one of several cloth umbrellas scattered between tables serving little bites of food and tastes of wine on the terrace at Hearst Castle. Things could be worse, for sure.

"Yes, it really is raining," one of the ladies pouring me some Calcareous Vineyard wine says as she chuckles and shakes her head. "Last year, we were all sweating."

Isn't that just life on the Central Coast? At least we're not sweating, I guess.

We beeline it down the stairs for some delicate and generously portioned ahi tuna served on a very crunchy wonton chip with seaweed salad and a little wasabi cream dished out by Indigo Moon from Main Street in Cambria. Gazing back up at the castle, barely visible through the thick fog, and across the terrace filled with the well-heeled of SLO County and beyond (one of whom is carrying a pork slider that I'm eyeing to fill my plate with next), who cares if a little rain makes my hair frizz out? 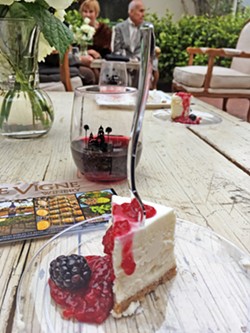 Twilight on the Terrace at Hearst Castle is in full swing on this first Saturday evening in June. Hosted by the Foundation at Hearst Castle, this year's funds will go to support an endowment for art restoration and preservation at the castle as well as new youth programs.

The lilting melodic voice of the Tipsy Gypsies' Hilary Langdon floats down the steps and over the crowd. Set up in front of the giant doors at the main "house" (I don't know why they call it a house; it's definitely not a house), the Gypsies are bundled up in their winter best. Covering one of Portishead's haunting tunes, Langdon and Co. put a jazzy twist on things, which is kind of perfect for being fancy on the terrace of this fantasy that was erected in the 1920s.

Ladies in flapper dresses pass us by in their flippant finery and feather-topped fascinators. We head up to check out the Tipsy Gypsies and enjoy the mood, made even moodier by a little bit of mist, and stuff our faces with the plate we just stacked full of tasty little morsels. Fountains around us are founting, the marble benches have a slight wet sheen to them, people are starting to let loose and dance, and big droplets of rain are sparse and only falling in random spots—which I kind of like.

Although my friends and I can't afford to bid in the silent auction, we do daydream about who we would bring to a swim in Neptune's Pool if we could afford the $2,400 opening bid as we enjoy some cheesecake in one of the guesthouse courtyards. My hair is reaching peak frizz, but I think I can manage just a little while longer as I lean back into the outdoor couch with my glass of wine and take in the atmosphere. It's definitely not the end of the world. Δ

Editor Camillia Lanham is enjoying the sun that came out on June 3. Send comments to clanham@newtimesslo.com.