Atmosphere, a Minneapolis-based hip-hop duo, can lay down some dark, muscular sounds, like "Try to Find a Balance," about the rough and tumble poser-filled cutthroat rap scene, or "Guarantees," about the grind of being exploited in a dead-end job. It's gritty, authentic stuff, but give me their track "Sunshine" instead, please!

Their stylish studio-filmed, animation-enhanced video for the track opens with a young woman waking up with a hangover: "Ain't no way to explain or say/ How painful the hangover was today/ In front of the toilet, hands and knees/ Trying to breathe in between the dry heaves/ My baby made me some coffee/ Afraid that if I drink some it's probably coming right back out me."

It's a Digable Planets-style jazzy track with simple piano, light programmed drum track, and a little synth, with words by Slug (Sean Daley) and production by Ant (Anthony Davis), and it quickly turns from hangover misery to optimism:

"All of a sudden, I realize something/ The weather is amazing, even the birds are bumpin'/ Stood up and took a look and a breath/ And there's that bike that I forgot that I possessed/ Never really seen exercise as friendly/ But I think something's telling me to ride that 10 speed/ The brakes are broken, it's alright/ The tires got air and the chain seems tight/ Hopped on and felt the summertime/ It reminds me of one of them Musab lines like// Sunshine, sunshine, it's fine/ I feel it in my skin, warming up my mind/ Sometimes you gotta give in to win/ I love the days when it shines, whoa let it shine."

I wouldn't describe most hip-hop artists or their music as charming, but on "Sunshine" and other similar tracks, this pair is downright cheerful.

Numbskull and Good Medicine Presents is bringing Atmosphere, with special guests Dem Atlas, The Lioness, and DJ Keezy, to the Fremont Theater on Sunday, March 10 (7:30 p.m.; all ages; $36.10 at Boo Boo's or eventbrite.com).

Atmosphere, formed way back in 1996, is touring in support of their newest, 2018's Mi Vida Local, their 12th studio album! As their bio says, "Slug and Ant still have plenty of stories to tell."

Numbskull and Good Medicine also have a few other cool shows this week, including country artist Sam Riggs at BarrelHouse Brewing this Thursday, March 7 (6 p.m.; all ages; $16 presale at Boo Boo's and ticketfly.com or $20 at the door). I'm not sure what the plan is if it's raining, but Riggs—an Austin-based performer touring in support of his 2016 album, Breathless—puts on a great show on banjo or guitar.

Samba-reggae-funk act SambaDá plays a Numbskull and Good Medicine show at The Siren on Saturday, March 9 (8 p.m.; 21-and-older; $13 presale at Boo Boo's and ticketfly.com or $15 at the door). If you missed Mardi Gras, this Brazilian carnival-style act will have you bumping.

Even more exciting (in my book) is a show at Pozo Saloon on Saturday, March 9, in the field in back of the building, which means it will be canceled if there's rain. But last I checked, this Friday is sunny and Saturday is just cloudy, so head out and see Cody Canada & The Departed and Micky & The Motorcars in the afternoon (1 p.m.; all ages; $20 presale at Boo Boo's and ticketfly.com or $25 at the gate).

Good Medicine's Todd Newman said this one was going to be "very family oriented. Throw a blanket on the grass and kick back."

Instead of putting the bands on the giant Pozo stage, they're bringing in a smaller stage for a more intimate show. Should be fun! Plus, you can mack down on killer Pozo Saloon barbecue while you listen to some great Americana roots rock!

Finally, Vancouver's kilts and bagpipe Scottish punk band The Real McKenzies play The Siren on Tuesday, March 12 (7 p.m.; 21-and-older; $12 presale at Boo Boo's or ticketfly.com. or $13 at the door), with the Texas punk act Piñata Protest opening. Sounds like a hoot and a good liver warm-up for St. Paddy's Day.

Most brand new bands don't get to debut on national television, but Better Oblivion Community Center isn't just any band. It's co-fronted by Phoebe Bridgers (boygenius) and Conor Oberst (Bright Eyes, Desaparecidos, The Faint), which is why they wound up on The Late Show with Stephen Colbert and CBS This Morning, even though they only released their debut album in January. 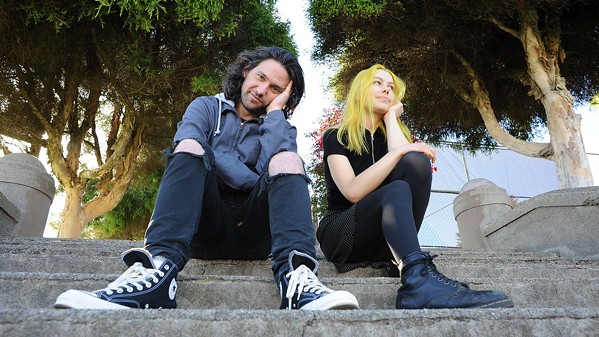 Better Oblivion Community Center plays the Fremont on Monday, March 11 (8 p.m.; all ages; $33.17 at Boo Boo's or fremontslo.com), with Sloppy Jane and Christian Lee Hutson opening. Oberst and Bridgers met in 2016 when she played a "secret showcase" he hosted at LA's Bootleg Theater, and then he collaborated with her on the duet "Would You Rather" from her 2017 solo album, Stranger in the Alps. Boom! They discovered they jelled, and the rest is indie rock history.

"Ladies and gentlemen, as you know, we have something special down here at Birdland this evening," Pee Wee Marquette intones in the introduction of the classic recording of the Art Blakey Quintet, "A Night At Birdland." Then he mentions that when the audience claps, it will become part of the live recording. Well, stop the presses, people, because here's your chance to become part of another live recording.

Folk duo To Wake You will be making a live in-studio recording of their Winter and Sacred Tree Concert on Saturday, March 9, at 7 p.m. in SLO's Laurel Lane Studios ($20 to $40 at towakeyou.com).

"For the past two years, we have developed and performed this unique set of traditional and original materials with piano, harp, guitar, percussion, and spoken word," Mark Davis and Karoline Hausted wrote on their website. "The concert is meant to be a shared, communal experience, and so we have decided we would like to record it with an audience present and participating—there is some easy group singing in the finale. Please come and be part of the magic as we capture it!"

"In playing the ancient, legendary brass-strung harp of Ireland and performing marvelous tales of wit and enchantment, he not only brings new life to two cherished traditions, but blends them in concert to create 'a richly theatrical and hauntingly beautiful performance,'" press materials read.

Vocalist-guitarist Julie Kelly will perform with the Marshall Otwell Trio and special guest saxophonist Dave Becker at D'Anbino Winery on Sunday, March 10 (4 to 6:30 p.m.; 21-and-older; $20 at (805) 227-6800). "One of the Top 10 winners of the Downbeat Reader's Poll, jazz recording artist Julie Kelly has garnered critical acclaim for her newest CD, Happy To Be, as well as a loyal following in Los Angeles and throughout the country," according to press materials.

Grammy Award winners Ladysmith Black Mambazo return to the Performing Arts Center on Tuesday, March 12 (7:30 p.m.; all ages; student and adult from $19.20 to $54 at calpolyarts.org or (805) 756-4849). They may be best known for their collaboration with Paul Simon on his 1986 album, Graceland, but on their own they're an amazing world music act with five Grammy Awards, including Best World Music Album for their 2017 Shaka Zulu Revisited release. A free pre-concert lecture will be led by Cal Poly language professor Brian G. Kennelly, beginning at 6:30 p.m. in the Performing Arts Center Pavilion.

"We're taking back the Central Coast by force!" Krystal Otis of locally produced Hail Yourself! Metalzine wrote. "Originally birthed by Matt Carney in 2001, with contributions made by Steve Jenkins, and later succeeded by Dylan Wordeman (aka Softwaffle), Slaytanic Carnage was an extreme metal radio station on KCPR."

Now, Hail Yourself! has resurrected the show as a podcast that you can tune into whenever you want!

"Our first guest, Matt Harvey of EXHUMED, will deliver our first 30-minute segment with his choice cuts of brutality, including announcements on upcoming Central Coast metal shows," Otis added.

Visit soundcloud.com/hailyourselfmetalzine/slaytanic-carnage-episode-1 for the podcast.

"We're recording episode 2 on March 14 (due for release the following week), and that one will have a big show announcement for April," Otis finished. Δ