Two bits: Shave, haircut, and haberdashery at The Ritual in SLO 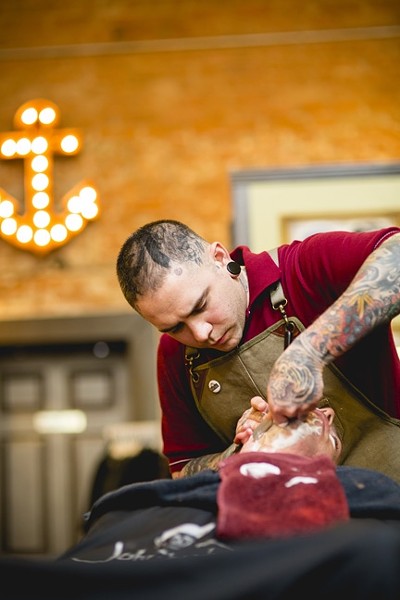 Past the containers of moustache wax, past the Pabst sign, back, back, behind even the racks of shirts and bomber jackets, wait two barber chairs, one of which is presided over by the densely inked Sammy Mejia.

The Ritual, a gentleman’s apparel, accessories, and lifestyle shop, opened as a companion to the woman-focused Hepkat in downtown San Luis Obispo in November 2013, offering what Frank Brown—the owner’s son and current manager of sorts for the shop—called “not strictly suit-and-tie-type stuff, but, you know, fun, wearable stuff for finer occasions—or whatever.”

On a recent afternoon, I found Brown dressed in a mocha cashmere-blend Pendleton crewneck and dark jeans, topped with a classic fedora. The metallic hint of a pocketknife glinted at his waist. His beard paradoxically appeared both scruffy and maintained.

He typifies an intentional modern style, at once casual and put together.

Brown led me back through the shop to the shave and haircut area, which is an even more recent addition to the establishment. Mejia began applying his straight razor to local faces a little less than two months ago, and business has been steady ever since. He’s already seen repeat customers. He estimated that he gives seven to 10 haircuts a day, and three or four shaves, seven days a week.

For the next couple of months, the shop is running promotional pricing to introduce the barbering services to the community: $15 for a classic cut, $20 for a straight shave.

Brown said that Mejia’s schedule is pretty full every day, and they’re looking to bring in another barber to make use of the other chair.

Mejia explained that he was in the tattoo business for 11 years, but ultimately left to get “a big-boy job.” His former life trajectory is evident in the images on his arms, the large piercings in his ears, even on the top of his head, where Jesus peeks through his close-cropped hair. Mejia said that one client’s son recently opined that he couldn’t believe his dad was going to “let the guy who looks like he just got out of prison put a knife to his throat.” That vibe bleeds out into the barbering space as well. A poster displays various men’s haircuts illustrated in new American-style art. Suavecito hair products boast a logo featuring a skull with a pompadour. There are, in fact, skulls depicted throughout the shop—including on a leather strop hanging at Mejia’s station.

A casual observer might describe the aesthetic as rockabilly hipster. Brown said that, in fact, a 14-year-old kid recently popped in a proclaimed the shop to be a hipster store. I asked, “Is this place for hipsters?”

“We can take care of them, too,” Brown said, after a pause. “They’re welcome.”

The Ritual is at 781 Higuera St. in downtown SLO. For more information or to make an appointment, call 596-0360. Follow Mejia on Twitter: @sammy_town.