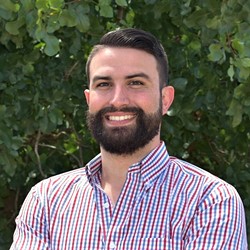 Dary Rezvani, a first-generation American and Democrat, was born in Fresno and lived there until his parents' divorced while he was in junior high school. Shortly after that, Rezvani said he moved to Paso Robles with his mom, where he helped care for his grandpa and attended St. Rose Catholic School.

He went on to attend Mission College Preparatory Catholic High School in SLO until his graduation in 2008. He briefly attended Cuesta College before returning to Fresno at age 19 to work at his father's auto repair shop.

"Going to Mission Prep kind of opened my eyes," he told New Times, "because to say it's predominantly white is an understatement."

At Mission Prep, Rezvani said he was one of the only kids of color in most situations and was the only Middle Eastern kid most of his friends knew. If elected, he said he would be the first Iranian-American ever to serve Congress.

"I kind of stick out like a sore thumb in these situations," Rezvani said.

Considering recent tensions between the U.S. and Iran, Rezvani said it's more important now than ever to give a voice to America's Middle Eastern community in the political sphere. Nothing, he said, will come of electing public officials who spout anti-immigrant, anti-Middle Eastern, and Islamaphobic rhetoric.

He pointed to the recent controversy over former SLO County Planning Commissioner Jim Harrison, who resigned after several of his Facebook posts comparing Democrats to Nazis and calling for Islam to be banned came to light.

Living in SLO also showed Rezvani that homelessness is a dire issue even in the most picturesque and wealthy communities, and that the nation's health care system isn't working as is. But those issues are pretty much secondary, he said, to climate change. Living near the coast in SLO County gave Rezvani a deep respect for the environment, he said, and a front row seat to the ripple effects climate change is causing for farmers, coastal habitats, and marine life.

While Rezvani said he had hoped to throw his hat into the political ring later in life, he can't watch someone like Congressman Nunes, "who believes climate change is a hoax," make policy decisions based on that belief.

"We really don't have time to wait," he said.

Nunes, who assumed his position in the U.S. House in 2003, is also a former SLO County resident. He attended Cal Poly until he graduated with a master's degree in agriculture in 1996. Δ