Two Gallants prove big sounds can come from a duo, May 9 at SLO Brew 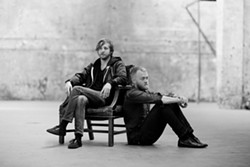 In James Joyce’s ironically titled “Two Gallants” from his 1914 collection Dubliners, two friends take a stroll one evening, and one, Corley, brags to his friend Lenehan about a woman he seduced. Clearly scornful of his conquest, Corley notes that she pays his tram fare after their trysts and brings him stolen cigars from her employer, where she works as a maid. Corley finds this arrangement much better than dating, and Lenehan feels envious and dreams of finding a “simple-minded” woman. All three meet later on, and Lenehan disparages the woman’s attractiveness. At the end, we find that she’s presented Corley with a gold coin, and that the two friends had planned to swindle it from her all along.

Why the synopsis? Because this is the story from which the San Francisco folk-rock duo Two Gallants lifted their name. Plus it’s a good story that proves being a misogynist ass-hat is nothing new and that Joyce was an astute observer of the darker side of human nature.

The two members of Two Gallants may not be James Joyce, but they bring a literary sensibility to their music, which has recently evolved from somber folk and blues ballads and laments into whisper-to-a-scream explosions of cathartic rock, grunge, and punk reverie on their newest album, The Bloom and the Blight.

Adam Stephens (guitar, harmonica, keyboard, and vocals) and Tyson Vogel (drums, guitar, vocals) began performing as Two Gallants in 2002 when they were 21, but the two had been making music together since they were 12 and friends since 5. True DIY performers, they played house shows, warehouses, street corners, and parks, and self-released two separate CDs (both now out of print but highly collectible).

They also gained national attention when they were attacked by a taser-wielding Houston cop ostensibly investigating a noise complaint when they were playing a show at a club called Walter’s. The event even made it into Rolling Stone.

The Bloom and the Blight, which came out in September of 2012, was their fourth album as a duo, following The Throes (2004), What the Toll Tells (2006), and Two Gallants (2007), and with each album they’ve grown and expanded their sound.

“We’ve both gone through some hard stuff personally, so this album has that element of the cathartic, of a release of tension,” Stephens explained in press materials. “We had taken time off, and we did different things, played in different bands. And in doing those things, being apart and redefining ourselves in that way, we were able to come together with a fresh approach. Our past albums have been a lot more folk and blues-based, and I tried to move away from that to some extent. I wanted to find a rawness in the music and take us back where we’d come from, from punk rock and grunge in particular, to our childhood, in some ways.”

“This record is important for us—as a next step,” Vogel explained. “It’s a passage into adulthood in a lot of ways. We had a hiatus of a few years, and each of us went through things that we had to go through. This record breaks the silence.” 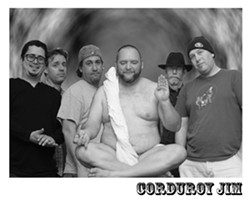 South Bay band Corduroy Jim will roll into the Frog and Peach this Thursday, May 8, to promote their latest release, Cinco. Heralded as “Canada’s answer to Ace of Bass” by the Toronto Sun Examiner, an accolade the band calls “an odd comparison given that we are from the San Francisco Bay Area and the Ace of Bass question has not been raised in 20 years,” Corduroy Jim plays a “unique blend of funky Americana Jam music,” they claim, adding that their “undeniable driving undercurrent of traditional Peruvian goat-herding chants harkens back to the early formative years of the band’s leader, Martin Rodriguez, who, on a misty spring morning at the ripe age of 11, had a vision while gathering his flock on the altiplano bordering Bolivia.” I’m pretty sure these guys are full of shit, but they sound fun, don’t they? The show starts at 9 p.m. and is free.

Sometimes you’ve got to get in your car (or camper) and drive, which is exactly what bluegrass fans should be doing this Thursday, May 8, through Sunday, May 11, when the picturesque Monterey County hamlet of Parkfield hosts the Bluegrass Music Society of the Central Coast’s annual Parkfield Bluegrass Festival. “Bluegrass music fans take over this small country village once a year for four days of concerts, workshops, children’s activities, camping, and round the clock music jams!” according to organizers. You can camp for the weekend or come for one day, and this year’s lineup is pretty dang awesome! Headliners include Peter Rowan from Boston, Central Coast legends the Cache Valley Drifters, and Jeff Scroggins & Colorado from Lyons, Colo. You’ll also hear Front Country, Snap Jackson, Virtual Strangers, Little Black Train, Amber Cross, Honeysuckle Possums, Steep Ravine, Canyon John, the Creak, Old Time Fiddle & Banjo Show, and the Naked Bootleggers. Visit parkfieldbluegrass.com for all the details.

The Waymores return to Música Del Río House Concerts in Atascadero on Friday, May 9, at 8 p.m. ($20; call 466-6941 for reservations and directions). Don Henry, Sally Barris, and Tom Kimmel are three of the finest singer-songwriters in America. Not to be missed!

The SLO Blues Society presents jump blues artists Earl Thomas and The Rhumboogies on Saturday, May 10, at 8 p.m. at the SLO Vets Hall, with Guy Budd and The Gypsy Souls with Inga Swearingen opening ($20 at the door).

Katey Laurel headlines the Songwriters at Play showcase on Monday, May 12, starting at 6:30 p.m. in Bon Temps Creole Café. The

Denver-based folk-pop chanteuse draws inspiration from her “somewhat bohemian childhood hiking, painting, and horseback riding in the mountains of Colorado.” Her songs have been placed in several independent film soundtracks: MTV’s Catfish, Logo’s The Baby Wait, and a Fisher-Price Dora The Explorer promo. If you like Sarah McLachlan, Natalie Merchant, Jewel, or Colbie Caillat, Laurel’s up your alley. Visit songwritersatplay.com for the series’ complete lineup.