Synergy—the Beatles had it. They were better artists as a group than as individuals, John Lennon notwithstanding. What causes it? How does it happen? These are things we can’t really know because synergy is a kind of magic.

I recently witnessed synergy in action. A couple of weeks ago Bob Liepman of Bob and Wendy told me he and his wife had joined forces with another couple, Mark Davis and Karoline Hausted, two newcomers to SLO County, and that they were rehearsing at Bob and Wendy’s house, and would I like to come by. Yes, I would indeed.

First, a little background: Mark and Karoline’s story is sort of amazing. Karoline hails from Denmark, and 11 years ago, Mark traveled there for a songwriters’ retreat, where he met Karoline. They were tasked with collaborating on a song and hence “Fallen Star” was born. After the retreat, they lost touch for eight years, but by coincidence they met again, and this time they were both single. They remembered their song, whose chorus says, “I know I got here by a star in the sky that has fallen. I watch as it burns into nothing. And I’m holding it close, the beautiful way I was haunted. That’s truly all I ever wanted.” Clearly this was a love that was meant to be. Now they’re married, and moved here several months ago from Pasadena.

A mutual friend—Brett Perkins—introduced the two couples last January, and after several hikes and dinners, and over the course of considerable jamming, they started to realize there was something special happening musically between them. And they’re right.

I watch intently from my perch on a chair in Bob and Wendy’s living space, where Karoline’s delicate fingers dance over her keyboard as Mark’s long hair obscures his face as he works his acoustic guitar. Bob is seated with his cello between his legs, and Wendy stands at the microphone as they work through “Witness Me,” a song Karoline and Wendy collaborated on. It’s a delicate, gorgeous song about the interdependency of the artist with the audience, with Wendy singing lead and Karoline and Mark providing backing vocals. Simply stunning.

After the song, Wendy admits she’s in a really fertile period artistically, and lyrics have just been flowing out of her.

The next song they rehearse, “Sunlight Support,” features Mark’s warm voice in an Americana-style song. Karoline plays delicate piano, and Bob adds cello, and let’s face it, there’s something inherently tender and somber about the cello sound, which can at times border on the morose, but in this song Bob’s cello soars and pushes the song toward optimism.

“That’s a melody I wrote 12 years ago,” Mark tells me after the song ends, “but I could never finish the lyrics.”

Enter Karoline and Wendy, who quickly filled out the narrative song: “You’re looking for sunlight support and I’ve been lost in the rain.”

Another song Wendy and Karoline co-wrote is “Shadowlands,” about what happens when creativity goes dormant: “Where did you go when nothing would grow?”

“I had this idea and she started playing this riff,” says Wendy as Karoline demonstrates on the keys. When they perform it, I marvel at how well their voices work together.

After the song, Wendy makes a quip about being asked, “So Wendy, are you a songwriter?”

“No, not today,” she says, expressing the elusive nature of the creative urge, but that’s clearly not the case now. All four of these musicians are on a creative tear.

“I don’t know what it is about these two,” says Wendy, referring to Mark and Karoline, “but they ignited something in me.”

This group, which still hasn’t settled on a name, writes literate, evocative, lovely songs, and you can hear them this Saturday, Aug. 24 at 8 p.m. in Steynberg Gallery. They’ll back one another on songs Wendy, Mark, and Karoline have written individually as well as perform the material they collaborated on. Prepare to be amazed by these award-winning songsmiths! 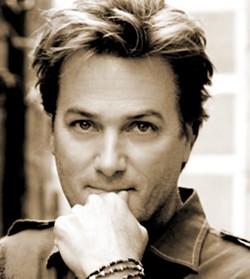 Last year, the inaugural Cantinas Music Festival drew a whopping 5,000 to Paso Robles. That’s a whole lot of Christians gathered in one spot! Can you say mega church? Can I get a witness?

Now the 2nd Annual Cantinas Music Festival arrives in the Paso Robles Event Center (home to the Mid-State Fair) this Saturday, Aug. 24 starting at noon and running until 8 p.m. (The concert doors open at 5 p.m. and $35 tickets are available at cantinasmusicfestival.com).

Once again, the concert has attracted some heavy hitters of the Christian music scene, including headliner Michael W. Smith, the three-time Grammy Award-winner who’s also taken home 40 Dove Awards, sold more than 13 million albums, recorded 28 hit No. 1 songs for the Christian music charts, and released 22 albums since his career ignited after opening for Amy Grant in 1982. He also once made People Magazine’s list of “Most Beautiful People,” so he’s got that going for him, plus, you know, the whole heaven thing. Some dudes have all the luck.

The lineup also includes Francesca Battestelli, whose debut album, My Paper Heart, led to a Grammy Award nomination thanks to the single “Free to Be Me.” The album became the biggest selling Christian music debut in a decade and rode the Billboard Christian Album Chart longer than any album by a female ever! Her follow-up album, Hundred More Years, also charted several singles. She got her start at age 15 when she joined and toured with the all-girl pop group Bella.

The festival also scored an appearance by the dreadlocked American Idol sensation Jason Castro, who came in fourth in the seventh season of the TV show. Interestingly, he grew up playing drums, taught himself guitar in college, and he had no formal voice training. In fact, when he auditioned for American Idol, he’d only sung in public five times, mostly in church!

Also on the bill is the award-winning hip-hop dance troupe The Groovaloos, which have made appearances on Dancing with the Stars, So You Think You Can Dance, and The Wayne Brady Show.

And naturally, there’s a whole lot more happening at the festival before the concert, including live music performances by Kyle Sherman, The Adventures of Rodeo & Juliet, CIRCLESiGHT, as well as dance performances by the God Squad Dance Crew and tap dancer Hayley Mac, plus vendors, L.A. fashion trucks, an arts and crafts area, a kids GodSpell zone, a popular Christian author book signing, and more.

“Knocking on Heaven’s door once again on Aug. 24, we hope you join us in seeking His presence and impacting families, future leaders, and the community for the glory of God,” said Wendy Hughes, co-founder and executive director of Cantinas Ranch Foundation, a non-profit that, according to its mission statement, “Looks to transform our modern day culture through opportunities where God can be magnified through the arts.” The ranch itself is a 650-acre parcel on Lake Nacimiento where the foundation plans to build a Christian camp.

As someone who digs Jesus’ message but thinks too many self-proclaimed “Christians” use their religion to judge and exclude, here’s hoping this gathering and the Cantinas Ranch Foundation preach a message of acceptance and inclusion of all, because that’s what Jesus would do.

What to say about Black Flag, a band so notorious, so storied, so shrouded in mystique to nearly be deified by its fans? It’s a band whose membership amounted to a revolving door, and whose brutal, short, stripped down songs were the perfect kindling to the ’80s punk rock movement. 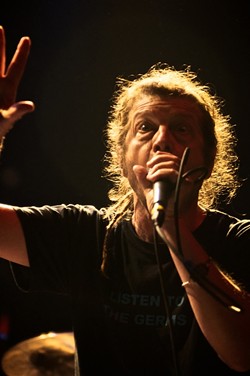 The original lineup featured vocalist Keith Morris, guitarist Greg Ginn, bassist Chuck Dukowski, and drummer Roberto “Robo” Valverde, who played their first show on January 27, 1979, at a Moose Lodge in Redondo Beach. “Morris ran around the stage like an escaped lunatic, eventually wrapping himself in one of the venue’s American flags like it was a straitjacket,” according to the current lineup’s bio.

Despite the many personnel changes, they managed to release some classic studio albums: Damaged, My War, and Slip It In; two live albums; two compilations (Everything Went Black and The First Four Years), and several EPs before they finally imploded in 1986, not to mention classic tracks such as “TV Party,” “Wasted,” “Rise Above,” “My War,” “Gimme Gimme Gimme,” and “Nervous Breakdown.”

Fast forward to December 2011, when Morris, Dukowski, drummer Bill Stevenson (who played in Black Flag from 1981 to 1985), and guitarist Stephen Egerton (who’s been a member of the Stevenson-founded Descendents and ALL since 1985) reunited for a surprise performance at L.A. promoter Goldenvoice’s 30th anniversary concert. Guess what? The crowd dug it, and the four joined forces with Dez Cadena (who sang lead, then played guitar in Black Flag from 1980 to 1983, before fronting DC3 and joining the Misfits in 2001), decided to extend the legacy, and worked up a repertoire of 30 classic Black Flag songs. Calling themselves FLAG, they’re playing SLO Brew this Thursday, Aug. 22 (8 p.m.; all ages; $25) with local punk act Magazine Dirty opening.

On Monday, Aug. 26 (8 p.m.; all ages; $13 presale or $15 at the door), check out indie folk act Lord Huron. Their jangly, hook-laden songs are immediately accessible. We Are the West will open. The L.A. duo has recorded in drainpipes, performed on sheep farms, and currently hosts a concert series in an underground parking garage the Saturday before a full moon.

Of course the absolutely most important SLO Brew concert of the year is next Thursday, Aug. 29, when the New Times Music Awards takes place (7 p.m.; all ages; $8 at the door). Not only will the awards be handed out, but there will also be performances by Travis Warren, Taktical, The Monroe, Fialta, Vincent Bernardy, and Dulcie Taylor.

My wife and I belong to just one wine club, and it's Veris Cellars, home to our favorite wine Ben Hogan and our second favorite JanKris. It’s awesome for several reasons, not the least of which is they’ll give you a bucket of balls and a golf club and let you drive balls into the vineyard. Another reason is their events, like the Boots n Skirts BBQ & Barn Dance this Saturday, Aug. 24 from 6 to 10 p.m., when the Tarweed Two and the Two Time Boys will perform for your dancing pleasure. The last time we attended one of these deals, they served paella, and it was delicious, so expect good food, good wine, and a good time. Visit veriscellars.com or call 434-0319 for more info.

A note to readers, promoters, and performers

You may have noticed over the last couple of weeks that the music column has changed somewhat. In the past, I’ve attempted to list every show that was submitted to me, but I began to feel the music column was becoming too much like the Events Calendar, merely listing concerts in a couple of sentences.

I’ve since decided to write longer about fewer shows and allow the Events Calendar to list concerts I haven’t been able to cover in this column. Please be patient as our new Calendar Editor works to update the Clubs and Concerts section with all the upcoming shows week after week, and be sure to check the listings for the various shows happening at the county’s many venues.

Performers and clubs, by all means continue to send me info about your shows, and what I can’t fit I’ll forward to the calendar. Feel free to contact me with any thoughts, suggestions, and concerns.