The paintings of Joan Longas and photographs of Gary Dwyer do not, at first, seem complimentary. The two artists, who both have new exhibits opening at the San Luis Obispo Museum of Art, differ in their nationality, their preferred medium, and, often, their subject matter. The former, a Spanish painter with roots in graphic design, specializes in scenes of everyday allure—whitewashed houses, roadside inns, and desolate gas stations.

Dwyer, a professor of landscape architecture with a background in sculpture, focuses on whatever happens to catch his eye—whether it be the azure glow of the Mediterranean sea, the dead eyes of a mannequin in a shop window, or just a red table set askew on a beach. One is traditional and sedentary; the other embraces spontaneity and modern technology. However, while the two may seem a study in contrasts, they share a fundamental trait: They embrace the foreign. 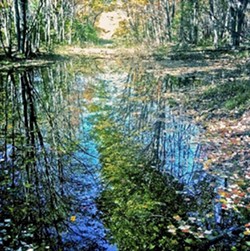 Despite what the title of Longas’ show, Impressions of a Stranger, might suggest, he is not entirely unfamiliar with the Central Coast imagery he paints. His daughter Sophia, now 20 and a student at Cuesta College, was born in San Luis Obispo. And since 1983, he has made regular trips to California. When he speaks about the region, there is a hint of intimacy. Of the area’s natural appeal, Longas waxes poetic: “I would say the coast here is of a beauty still wild, and the ocean gives the scenery an air of persistent melancholy.” There is a distinct serenity and sadness not only in the way he describes the Central Coast, but also in the way he paints it.

In the style of Edward Hopper, Longas conjures somber moods out of ordinary images. Take the Kon Tiki Inn off Highway 101 in Pismo Beach. To the regular passer-by, this hotel may appear as just another kitschy getaway tucked along a coast of several other kitschy getaways. In Longas’ hands, the Kon Tiki Inn becomes We are travelers in the night—a tranquil oil landscape that simultaneously captures the stark beauty and loneliness of a roadside inn at sunset. Indeed, it is along this stretch of highway between Pismo and Morro Bay that Longas finds particularly “loaded with lots of feelings.” 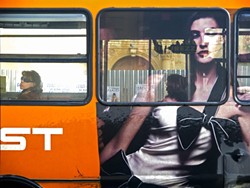 Again, a place like a local surf shack might not be your typical, go-to location for “lots of feelings.” And yet, though the surf shack in For a transitory enchanted moment is just a simple, blue and white building, the paintings’ gray overtones and vivid realism distill an overarching characteristic of Longas’ work—his ability to make the everyday appear alien.

Dwyer would be all too aware of Longas’ scenes. He lives in San Luis Obispo, taught at Cal Poly, and shares a fondness for architecture. And, like Longas, Dwyer’s art traverses international boundaries. Born in Denver to parents in the airline industry, he has worked and photographed in nearly 50 countries—from building war memorials in Slovenia to mentoring disabled students at Claude Monet’s home in France. It is a geographic scope only outdone by Dwyer’s broad range of artistic efforts. Since 1983, the same year Longas first came to California, Dwyer has used 22 different cameras and estimates that he has somewhere around 110,000 photos stored digitally. When describing his vast work ethic, Dwyer jokes, “I really am 300 years old.”

His photographs, though, reveal something far more contemporary and fresh than anything a 300-year-old could muster. He is less Hopper and more Cartier-Bresson. To capture his photographs, Dwyer is on the bustling, city streets to get a shot of a wayward reflection or in the backwoods of New Hampshire, armed with his camera phone. Bus Girl, a vibrant photograph of a woman painted on the side of a bus, embodies this on-the-move ethos that Dwyer inhabits.

“I try to see how we live and where we live,” he said, “and everything’s fresher when I travel.” And, although Dwyer dabbles in other creative endeavors, he sticks with photography because “there is a clarity to the work and singularity of vision.”

But, this clearness is conditional. Amid the placid beaches of Indonesia or the ruins of Greece, Dwyer sees “everything fresher.” However, at home on the Central Coast, among the same seascapes and highways where Longas finds inspiration, Dwyer admits to a kind of “blindness.” In an odd and unexpected way, the two artists answer each other’s work. Where one is foreign, the other is familiar.

When not hanging ten at the Kon Tiki Inn, you can find Jessica Peña at jpena@newtimesslo.com.