Two savages, a beard, some art, and a studio: Fiasco Gallery in Paso Robles 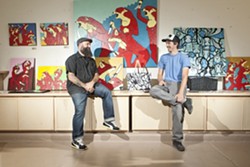 It comes as no surprise that Neal Breton and Jeff Claassen, both longtime artists and purveyors of art stuff, would eventually join forces. Both veterans of the San Luis Obispo “youth” art scene, Claassen and Breton have plenty of experience making and selling art. The former owned the Claassen Gallery for eight years, where he sold art supplies in addition to his own street art-inspired work. Breton, a painter and illustrator—occasionally for New Times—is the former owner of San Luis Art Supply, an art shop that doubled as an exhibition space for a scene of restless, talented kids he eventually dubbed the Young Savages.

Breton and Claassen have shown work together and collaborated on several projects over the years. So when they decided to open a new storefront art gallery at Paso Robles’ Studios on the Park, the biggest difficulty seems to have been deciding on a name.

A Facebook contest yielded many amusing yet impractical suggestions.

“My favorite one was Free Kittens,” Claassen recalled, seated in the new Paso Robles space.

“I had a bunch of really lewd ones from my housemates at the Establishment,” added Breton, referring to his 19-bedroom house in San Luis Obispo. “I had put up a list that said ‘Neal and Jeff’s Gallery,’ and most of them were poop- or genital-related. Obviously we couldn’t use any of those.”

Eventually, the name came to them on its own: Fiasco Gallery. It was young. It was casually self-deprecating, yet it whispered a promise of wild unpredictability. It was fun to say. It stuck.

Fiasco will celebrate its grand opening on Saturday, Sept. 7, in conjunction with First Saturdays, downtown Paso Robles’ monthly art walk. The gallery is located in just one of many spaces for working artists at 1130 Pine St. Enter Studios on the Park, make an immediate right turn, and you’re there.

On a recent visit, the space had a kind of workmanlike feel. Every object looked as if it had been placed for the very first time, and sat there rather self-consciously, as if still unsure if it belonged. Breton’s recent series of paintings—acrylics on canvas depicting anthropomorphic lady foxes brandishing knives—was on display on the wall facing the gallery’s entrance. Claassen’s Puzzle Painting—a successfully funded Kickstarter project that allows art buyers to purchase a small part of a larger painting—hung on the wall opposite.

Studios on the Park, founded by Anne Laddon in 2009, is a nonprofit created for the purpose of sharing the creative process with the public. Resident artists create work in an open studio environment, often offering classes and workshops, and regular exhibits are also on view in the venue’s atrium.

For Claassen and Breton, this semi-independent arrangement means not having to worry about utility bills, but it also means adjusting to new rules. Guest artists, for instance, must be juried by Studios before Fiasco can exhibit their work.

The venue, generally home to more mature, established artists, seems to have welcomed the idea of a younger, hipper crowd of art lovers that Fiasco would attract. Breton’s relationship with Studios began when the nonprofit asked him to jury an exhibit of work by a younger generation of artists. Breton responded with “Young Savages,” a show of work by many friends and former San Luis Art Supply regulars.

“Once we started exchanging ideas about the ‘Young Savages’ show, from there it just planted the seed for the idea that it’s an open market here,” Breton said.

The artistic community in Paso, he said, has been more enthusiastic and receptive toward his work than San Luis Obispo.

“New things can happen here … I think Paso is excited to see something different, because Paso is far more open-minded as far as the culture goes,” Breton went on. “They’re definitely more willing to see change, whereas San Luis Obispo has made up its mind about what they want to show … Sasha says that Paso has a—it’s not necessarily an identity crisis, but it’s definitely an inferiority complex,” he said, referring to Studios’ Program Director Sasha Irving. “For no reason.”

Breton still makes the commute to Paso from SLO (“This is not a commute,” the onetime L.A. resident argues), but Claassen has recently purchased a home in Paso Robles, where he now lives with his wife and son.

Since opening Fiasco, both artists have been pleasantly surprised by the number of international tourists who visit Studios. Paso may have an inferiority complex, but visitors don’t see it that way. Growing up in San Luis Obispo, Claassen admitted he associated the North County town with hicks and hot weather. But for newcomers, Paso is a place to enjoy food, wine, and visual art.

Both artists seem to be enjoying the creative vibe of Studios, where several artists can be seen working at any  given time.

“You can walk to the bathroom, and see two or three people painting. And you just feed off of that energy,” Claassen said. “I can’t slack off.”

“I describe it as painting summer camp. We paint at the same time, and we make fun of Sasha’s music,” Breton said. “And we have a good time talking to people about our work, and we meet a lot of weirdos. It’s been a pretty good experience. I had thought, ‘I’ll give it about a week, and then he’ll want to stab my eyes.’ But it’s actually been a lot of fun, and I don’t know if he wants to stab my eyes as much.”

“I’ve never wanted to stab your eyes,” Claassen countered sympathetically. “If I’m going to stab you, it’s going to be in the heart,” he gleefully added.