There seems to be a pile of bodies and wheels in the middle of the stage. To the right is a frantically gyrating woman in a wheelchair. To the left are two dancers tangling like moths mating in flight. But someone says stop, and the pile disintegrates into people—some on foot, some in wheelchairs, all of them athletes. The dance has begun. 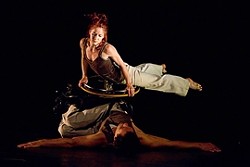 It’s a small moment in Axis Dance Company’s popular work “Light Shelter,” choreographed by David Dorfman, and it can be interpreted in any number of ways. But one thing is certain: Axis is not a dance company for people in wheelchairs. It’s an inventive and thoroughly contemporary group of performing artists—and the fact that roughly half of them perform on wheels makes it nothing if not more so.

The Oakland-based company has been around for nearly a quarter of a century. In creating Axis—an integration of dancers with and without physical disabilities—founding artistic director Thais Mazur filled a void in the performing arts community.

But the difficulty in doing something that hasn’t been done is convincing the public it’s worth doing, and the company would spend a good decade justifying the art form it purveyed. After years of proving to critics that what they did on stage was contemporary dance, and not some everybody-wins type of therapy, Axis reached a turning point in 1997. With new co-directors Judith Smith and Nicole Richter, the company began commissioning well-known choreographers in the world of contemporary dance. Suddenly, said Smith, who has served as artistic director since 2001, critics had to take another look. 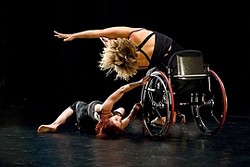 “It put us on a national level,” she said of the decision. “It gave them a context for looking at the work that we didn’t get before. They could look at the work in the context of what they knew about the choreographer.”

Since stepping in as artistic director, Smith has collaborated with or commissioned choreographers like Bill T. Jones, Stephen Petronio, David Dorfman, Alex Ketley, and Victoria Marcks. Though the majority of these people weren’t accustomed to creating dances for the wheelchair-bound, Smith explained, they welcomed the challenge.

“The choreographers that I tend to get are people that already tend to be thinking outside of the box,” she said.

As audiences began focusing less on what these performers couldn’t do and more on what they could, they began to see what Axis’s directors saw all along: the untapped artistic potential of a spinning wheel, a prosthetic limb, a crutch.

Picture, for instance, this lovely sequence from choreographer Joe Goode’s piece “the beauty that was mine, through the middle, without stopping,” winner of the Isadora Duncan Dance Award: A couple, one be-wheeled, one not—this is like Axis’ version of a boy and a girl—launches into a pirouette, the able-bodied one leaping into the lap of her partner, extending her body into a flying position in his lap as they spin. Suddenly he’s on the ground, wheels in the air, like an upended beetle. She mimics the position of his legs in the air, before working her way, wormlike, over to the wheel and lying on top of it, turning like a propeller. It’s all strangely sexy. His body begins to revolve, more slowly, in the opposite direction, and the wheelchair looks like just a small cog in a much larger machine.

But when Axis takes the stage at Cal Poly’s Alex and Faye Spanos Theatre on Oct. 15, the company will unveil some little-seen new work as well. “Full of Words,” choreographed by Marc Brew with collaboration from the dancers, debuted recently in Oakland. (Well in advance of that show, I noticed, wheelchair seating sold out.) The dance was created based on words submitted by fans via Facebook—words like “weightlessness,” “soul,” and “pop.” Brew collected these, gave pairs of dancers a word and two minutes to spontaneously interpret it, recorded the results, and shaped a performance out of it.

For Central Coast audiences, the final product remains a mystery. But if the past 25 years have been any indication, one would be well advised to come to Axis’s show without any preconceived notions about what certain words, like “dance” and “disability,” mean.