With tears streaming down my face, I rolled down all the windows in the car and took a deep breath of the ocean air careening around me, whipping my hair into my mouth and across my shoulders. Opening the sunroof, I reached down to turn up the sound of Spanish guitar and stepped on the gas.

Hurtling down Highway 1 outside of Santa Cruz, I let my angst and sadness float out of my brain as the sounds of the Gipsy Kings surrounded me. 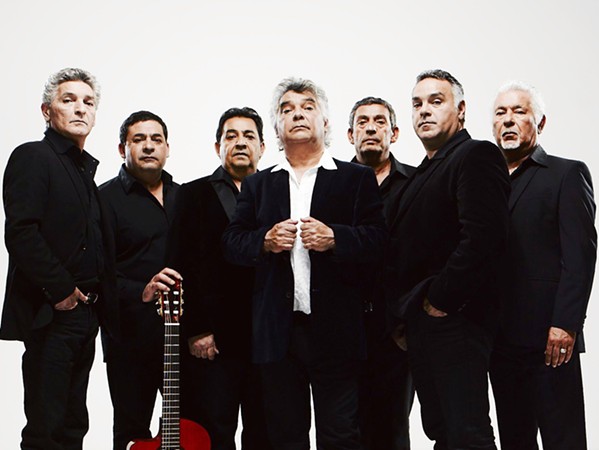 Translation: "This love comes this way/ It doesn't have fault/ Love to buy and sell/ Love in the past ...

Translation: "Because my love, I prefer to live like this."

I was a freshman in college at UC Santa Cruz, and there were stupid boy things that I needed to rid myself of. The sounds of the Gipsy Kings got me through to the other side, like a companion that would fill my soul with relief and joy. Odd, maybe, for someone who graduated high school in 2000 to blast hits from the late '80s and early '90s, but the strumming guitar and vibrant vocals from this group was all I needed to feel better—that, and racing down the Pacific Coast Highway at midnight in my white BMW, heading for my favorite beach to stare at the stars and feel the surf on my legs.

That Grammy Award-winning pair—Nicolas Reyes and Tonino Baliardo—and their band that used to serenade me is coming to Paso Robles. The Gipsy Kings play Vina Robles on Saturday, Sept. 9 (7:30 p.m.; all ages; $45.50 to $90.50 at vinaroblesamphitheatre.com), with special guest Simi Stone.

"Bamboleo" is only one of their songs that I used to have on repeat when I was 18. The soft, sweet sounds of "Un Amor," the bouncing grit of "Escucha Me," the quick strut of "Volare," I wasn't picky at all. Perhaps, that's just evidence of the Gipsy Kings' timelessness.

After 20 million albums sold, 25 years past the band's first album release, the band returns with their ninth studio album, Savor Flamenco, and a tour with the band's next generation of sons.

"Even though it's been 25 years, we want to keep on making new music because it's our life, it's who we are," Reyes said on the Gipsy Kings' website. "But I think there will be a time when we pass down the Gipsy Kings to our sons."

The leader in mariachi and Latin pop fusion music has more than 26 studio albums, nine Grammy Awards, and a star on the Hollywood Walk of Fame.

Born on tour to Mexican icons and rachera singers Antonio Aguilar and Flor Silvestre, Pepe first hit the stage when he was 3 years old. He started his solo career with the album Pepe Aguilar Con Tambora, released in 1991, eventually becoming a three-volume package.

His released his most recent album, No Lo Había Dicho, in 2016, which comes with the single "Nada de Nada."

The San Luis Obispo Record Swap is hosting a pop-up vinyl swap at Tooth & Nail Winery in Paso Robles at 4 p.m. on Saturday, Sept. 9, (free) which will be followed by the explosive rhythm of Jungle Fire (7 p.m.; all ages; $15 presale at ticketfly.com or $20 at the door).

The event that celebrates and gathers lovers and collectors of vinyl is in its fifth year of organizing large functions like what happens at the Guild/Grange Hall every year as well as smaller pop-up events. "We have been proud to see our passion for records reflected back in the community support we've received, and hope these events bring our music-loving community closer together," press materials stated.

If you're interested in becoming a vendor, email slorecordswap@gmail.com. Learn more by visiting slorecordswap.org.

Similar to the sounds coming out of Ozomatli, Jungle Fire brings a little bit of funk, a dash of cumbia, and a smattering of Afro-Caribbean to the mix, drawing inspiration from James Brown, Fela Kuti, Ray Barretto, and Irakere to pound out infectious rhythms you can't help but move to.

Originally coming together in 2011 as a sort of one-time deal, the 10-piece Los Angeles-based band released its second album, Jambú, earlier this year. Kicking off with the samba-infused funk of "La Kossa," the EP can push a booty-shaker through their cumbia-Caribbean-salsa-break-beat funky paces.

Tooth & Nail will also play host to the acoustic flamenco flare of Ottmar Liebert & Luna Negra on Sunday, Sept. 10 (6 p.m.; all ages; $35 general admission; $99 with four-course meal at ticketfly.com). La Semana, their first album with all new songs in five years, started conceptually as something like a diary for Liebert—"a leather-bound package, and each song would be titled after a different day of the week."

However, according to press materials, Liebert decided he didn't want too many words to interfere with the album's musicality.

"For me, the beautiful thing about instrumental music is it allows each person to have their own interpretation of what the music is about. The eyes rule over the ears; that's the way the human body works," he said. "And if you're being told something, the music takes a second seat. In the end this idea seemed too confining; I want music to be free of that specific a context."

Revel in the blues

They released their self-titled debut album in 2016, which was recorded by Kid Andersen at Greaseland Studio in San Jose and produced by Funderburgh and Hummel. The blues powerhouse will touch down at The Siren in Morro Bay on Thursday, Sept. 7 (6:30 p.m.; 21-and-older; $20 to $25; ticketfly.com)

There's more fun at The Siren spinning out over the weekend, with the Erick Tyler Band blending acoustic fingerpicking and groovy electric guitar solos on Friday, Sept. 8, at 9 p.m., and local surf-rock and reggae jam band Sovereign Vine taking the stage early on Saturday, Sept. 9 (3 to 6 p.m.), with alternative rockers The Bogeys and Up! Way Up! taking the late shift (9 p.m. to midnight).

The Cinders Blue Band with guitarist Dorian Michael and mandolinist/guitarist Kenny Blackwell will play you "real blues that you can dance to" at D'Anbino's Cellar in Paso on Friday, Sept. 8 (8 p.m.; 21-and-over; $10). The night before, D'Anbino's hosts the first Blues Jam Band North on Thursday, Sept. 7 (6:30 to 9:30 p.m.; $5 minimum suggested donation). All musicians welcome, but playing the blues is required.

On Friday, Sept. 8, the Los Angeles-based alternative/indie sounds of Divided Heaven (aka, Jeff Berman) will pound out of the Pour House in Paso (and the Frog and Peach on Saturday, Sept. 23).

Enjoy your beer and the normal, balmy—not boiling—fresh edge-of-SLO weather at the SLO Brew Rock for a couple of midday shows over the weekend. Catch the local guitar-violin duo The Cimo Brothers (who also perform in the Moonshiner Collective) on Saturday, Sept. 9, at 1 to 5 p.m. "Both are clasiccaly trained under the Suzuki method, but have also explored the realms of jazz, tango, rock, and folk," according to the Facebook event page. El Dub jams his reggae tunes for your open-air pleasure on Sunday, Sept. 10 starting at 1 p.m. he plays Mr. Ricks in Avila Beach on Friday, Sept. 8, at 8 p.m.

"Just over a year ago, I took a 9-to-5 office job that sounded like a dream on paper. It was a real stepping-stone for what could've turned into a great public health career. But after a year, I just felt completely depleted and disconnected," Menaker said in press materials. "That's when I woke up and realized I was living someone else's life. I knew it was time to redefine what 'normal' means to me—it was time to re-enter the music scene, but this time with a fierceness and reclaimed vigor I had spent years running away from."

The tour, she said, is a celebration of being "a square peg in a round hole," a "fearless step out into the light where I can turn the volume up on my voice without apologizing."

Portland-based jazzy R&B band Astro Tan shines its brand of sunlight into SLO Brew on Higuera Street on Tuesday, Sept. 12 (10 p.m.; 21-and-over; free). The trio's debut full-length album Canary, borrows from the British Invasion's psychedelic rhythm and guitar and crooning vocals, with a little bit of indie-type jazz thrown in there for good measure. Songs like "To Joyce, From Japan" and "The Jetsons" are a great example of what to expect from these harmonizing hipsters. 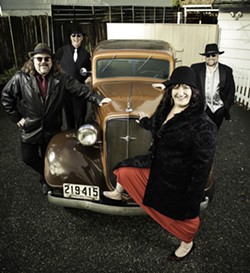 After all, "Life is like the Jetsons ... in a future utopia where it tastes like Picasso ... my digs are like the Flinstones ... just working class. ... I don't ask any questions/ Bam Bam beat the gramophone ... Where on Earth is Astro Jetson?"

I'm not sure about Astro, but I could get into these lyrics, for sure.

The San Diego-based B-Side Players takes over SLO Brew on Wednesday, Sept. 13 (10 p.m.; $12; 21-and-over). A nine-piece band that "honors the international cross-pollination that has always made music the universal language," the Players will lay down some latin global funk for your hump-day pleasure.

Swooping into the Frog and Peach on hump day, Sept. 13 (and Paso Brewing on Friday, Sept. 15), is Michele D'Amour and the Love Dealers. Touring for their third album, Lost Nights at the Leopard Lounge, the band, the Seattle-based blues and R&B band has a soulful sound reminiscent of Chicago and Mississippi Delta blues.

The next For the Folks benefit show is coming up on Friday, Sept. 8 at 7 p.m. ($10 donation at the door; all ages) outside of Whalebird Kombucha in San Luis Obispo. Sam Chase & the Untraditional, twice voted Best Band in the Bay Area (SF Weekly), will be paired up with the Turkey Buzzards for a concert that will support the SLO Surfrider Foundation. "These bands are cut from different ends of the same cloth and they embody what we had in mind with melding local/traveling acts when we started this series in March of 2016," press materials said.

The Arroyo Grande Village Summer Concert Series concludes with bluegrass and Americana rock of Cuesta Ridge on Sunday, Sept. 10, at the Rotary Bandstand in the Village (1 p.m.; all ages; free). The band was born in the sweet confines of the Santa Lucia Mountains, on the Central Coast. This six-piece, bluegrass-injected, Americana-rock conglomerate has been together since 2004.

Baywood Bayfest 2017 helms the Back Bay Inn and Café on Sunday, Sept. 10, from 1:30 to 7 p.m. (all ages, free). The family-friendly event will feature Burning Bad & Cool and New Times Music Awards winners Proxima Parada and the Zongo All-Stars. This is a free event, but there will be food and drink available for purchase at the Back Bay Café. Bring a low back chair, a blanket, and some friends. Don't bring any outside food or drink (please!). Δ