Writer-director Alan Ball (screenwriter of American Beauty) helms this comedy-drama about the Bledsoe family of Creekville, South Carolina. Set mostly in the early 1970s, it's the story of Frank (Paul Bettany), who's secretly gay, and his niece, Beth (Sophia Lillis), who feels most akin to Frank—a quiet, thoughtful man amid Southern rednecks. Frank escaped small-town Southern life and teaches literature at an NYC college, where Beth now attends as a freshman. Beth's father, Mike (Steve Zahn), is a classic Southerner, but the patriarch of the family—Frank and Mike's father, Daddy Mac (Stephen Root)—is a cruel, closed-minded bigot. When Daddy Mac dies of a sudden heart attack, Frank agrees to drive home with Beth to attend the funeral. Unbeknownst to them, Frank's boyfriend of 10 years, Walid "Wally" Nadeem (Peter Macdissi), rents a car and follows them, hoping to lend emotional support to Frank. Mixing flashbacks to Frank's younger years (young Frank played by Cole Dorman), we see what the trauma of repression and closeted sexuality has wrought on Frank's life. (95 min.) 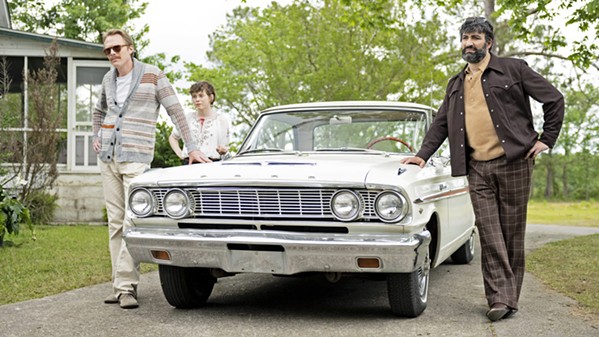 Glen This warm, openhearted film works as both a coming-of-age story for Beth and a cathartic story of reconciliation for Frank. It opens with a family gathering at the Bledsoe's Southern home. Frank is clearly different from his brother and father, and that difference draws Beth to him. She—like he—is smart enough to escape the repressive and closed-minded South, and he encourages her to apply for colleges. She ends up at the very same one he teaches at in New York, and it's not too long before Beth discovers Frank's secret. He's gay and has been in a long-term relationship with Wally, a Muslim man with his own secrets he's keeping from his family. That's the setup, but the real story starts and unfolds with the road trip to attend Daddy Mac's funeral, when Frank and Beth continue to bond, Frank and Wally work through relationship difficulties, and Frank confronts his past and a tragic event he blames himself for, which has driven him to return to his alcoholic ways. It's both laugh-out-loud funny and grab-your-tissues tender—a wonderful story about the limitations of tolerance and the family ties than bind.

Anna It definitely pulls at the heartstrings. Frank is somewhat of a tragic figure. He's essentially cut ties with his family and lives every day trying to pretend his past doesn't exist. Whether that means distracting himself with booze or teaching or his relationship with Wally, he has no intention of revisiting his early life in a backwards-thinking small town with a brute of a father. There's a clear spark between himself and Beth though; her bright ambition and openness coupled with her small-town naivete are incredibly charming. Lillis is wonderful here—there is a tangible earnestness to her character and in her performance. I expect to see more great things from her in the future. I also loved Macdissi as Wally, a tender and funny caretaker to Frank even as he descends into his cycle of alcoholism and abuse. Frank isn't always a nice guy, and Wally gives back with compassion and grace even in the dark times. This film touched me big time. I've been recommending it to everyone.

Glen The performances are terrific, and it's got the always dependable Margo Martindale as Frank's mom, Mammaw. She exudes such kindness in the role, the perfect foil to Daddy Mac, who can't mask his contempt for Frank. I'm sure the only reason Frank ever comes home is for his mother and Beth. As for Bettany, he's incredible here—a career-defining portrayal of a man haunted by a past tragedy. Uncle Frank is definitely a melodrama, but Frank and Wally's relationship is so moving and beautiful, and you're right, Macdissi is also amazing here. Even Root's Daddy Mac is a performance to behold. Great acting, a wonderful and deeply emotive story, and an honest ending combine to make this a fantastic family drama. Highly recommended!

Anna Frank alienates himself as a form of protection, but when Wally and Beth and Mammaw all force him to see that he actually is wanted, loved, and appreciated, those walls have to come down at least a little bit. There's no "the world is great now and homophobia doesn't exist!" ending here, but there is resolve. This film was simply really well cast—as you said, this is a career-defining role for Bettany; he's so nuanced and incredible here. It's one I'll definitely be watching again. The way the story and Frank's past is parsed out to us keeps the melodrama from feeling too slow, and there are moments that had me gasping, crying, laughing—it's a whirlwind of emotion for sure! Catch this on Amazon—it's worth renting even if you don't have a Prime subscription. Δ