Uncovered: Local LGBTQ-plus community says the fight for equal transgender rights in health care is far from over

It's been a tough few years for transgender and nonbinary Americans. In 2017, President Donald Trump announced that transgender individuals would no longer be allowed to serve in the U.S. military. In 2018, the U.S. Department of Education announced it would refuse to allow transgender students to use bathrooms and locker rooms that align with their gender identity.

Then on June 12 of this year, the U.S. Department of Health and Human Services (HHS) took another step, finalizing a rule reversing portions of the Affordable Care Act that protect transgender and nonbinary individuals from discrimination while seeking out health care and insurance coverage.

"Under the final rule, HHS eliminates certain provisions of the 2016 rule that exceeded the scope of the authority delegated by Congress in Section 1557," a June 12 press release from HHS reads. "HHS will enforce Section 1557 by returning to the government's interpretation of sex discrimination according to the plain meaning of the word 'sex' as male or female and as determined by biology."

The provision in question, under Section 1577 of the Affordable Care Act, prohibits discrimination on the basis of race, color, national origin, disability, age, and sex. But in 2016, the Obama administration extended the definition of "sex discrimination" to include gender identity, which it said "may be male, female, neither, or a combination of male and female." 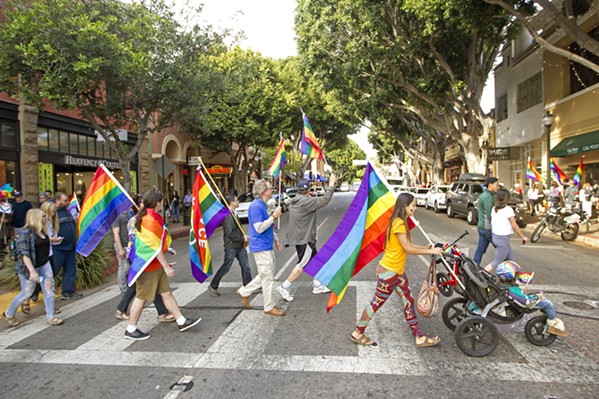 Critics of the Obama rule say it infringes on religious freedoms and a doctor's right to refuse to provide care contradictory to their religious beliefs, and in December 2016, a federal court agreed. The court issued a preliminary injunction against the Obama administration's redefining of sex, concluding that the provisions were likely in violation of the Religious Freedom Restoration Act and the Administrative Procedure Act. In its June 12 release, HHS said it hasn't been able to enforce the Obama-era provisions since then.

The new rule from the Trump administration, which is scheduled to take effect in August, will officially remove discrimination protections for transgender and nonbinary people.

Denise Taylor, a doctor at the Community Health Centers of the Central Coast, has long provided the local trans community with gender affirming care—procedures transgender people sometimes need to make their physical appearances match their gender indentities. Taylor worries that, despite California's protections for LGBTQ-plus people, the new HHS policy will negatively impact trans care locally—and all because of an argument that she said doesn't hold up.

Conservative Christians, she said, often argue that because abortion is legal, all doctors will be forced to perform abortions regardless of their religious beliefs. But that kind of procedure requires specialized training, and Taylor said only doctors who have that expertise are able to terminate pregnancies. If you're against abortions, she said, you likely wouldn't go into that field.

The same goes for gender affirming care, she said. It's a specialized field that requires specific knowledge, especially when it comes to sex reassignment surgery.

"So we're not forcing surgeons to suddenly have to do those surgeries," Taylor said.

What should be required of doctors, Taylor said, is that they provide care within their scope to patients seeking it, regardless of religious beliefs. Under this rule, Taylor said doctors could essentially refuse to treat a transgender patient for a cold simply because the patient identifies as trans. Doctors who do that, she said, should lose their licenses.

"Don't be a jerk," she said. "That's basically what the previous directive was."

Jamie Woolf, a trans woman and chair of Tranz Central Coast, said the new policy makes it clear that the Trump administration doesn't believe trans and nonbinary individuals should have the right to access even basic health care.

"We don't have a right to be," Woolf said. "And that's wrong and it is an attack on me and all the other transgender and nonbinary people out there."

However, Woolf said California law offers comprehensive nondiscrimination protections for the LGBTQ-plus community. While a doctor in California does have the right to refuse to treat a person they aren't comfortable with, a doctor cannot reject potential patients strictly because of their sexual orientation or gender identities. State law also requires health insurance companies to cover gender affirming care procedures.

While Woolf said there's still much debate over what counts as gender affirming care, she's grateful to live in a state that likely won't be dramatically impacted by the recent HHS reversal.

"I'm just hopeful that it will not seriously harm trans people in other areas where they don't already benefit from state protections," she said.

But local attorney Doug Heumann, who also serves as board president of the Gala Pride and Diversity Center, said laws don't lead to actual progress unless they're enforced. Getting insurance providers to cover gender affirming care has been a challenge, Heumann said, locally and recently.

Although trans care exclusions are illegal in California, self-funded plans like MCSIG's are subject only to federal regulations, according to reporting from the Monterey County Weekly.

"I was shocked to find, in this day and age, that MCSIG could have trans exclusions," Heumann said.

Heumann said he's been working with Cuesta and MCSIG for months now. Although MCSIG voted to do away with its trans exclusions at a board meeting in May, Heumann said there's still work to be done to ensure that MCSIG's new rules offer comprehensive coverage to trans and nonbinary people.

"So just because it's a law," Heumann said, "you still have to fight."

The same goes for the June 15 Supreme Court ruling, which gives the LGBTQ-plus community protections against sex discrimination in the workplace.

Since the Supreme Court ruling essentially redefined "sex" to include gender identity and sexual orientation, many say that can be applied to situations outside the workplace, which would undermine the Trump administration's recent reversal of protections for transgender people.

Heumann agrees, but he said it will likely have to play out in court, a long and arduous process.

"We believe that no longer will that HHS policy be able to stand," he said, "but that remains to be seen."