Grazyna Bacewicz is known in Poland as one of the nation’s first successful female composers. Unfortunately, to the rest of world, the many symphonies, concertos, and sonatas she wrote remained virtually unheard for decades—until a contemporary Polish violinist made it her mission to change all of that. Over the past eight years, Joanna Kurkowicz has championed the music and legacy of this little-known composer and musician who—were there any justice in the world, Kurkowicz believes—would rank among the foremost composers of her generation. 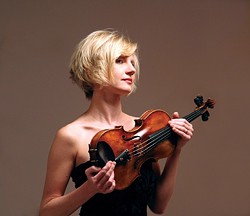 Born in Lodz in 1909, Bacewicz was something of a child prodigy: She began playing violin and piano at the age of 5, gave her first concert at 7, and composed her first piece, Preludes for Piano, at 13. She went on to study violin, piano, and composition at the Warsaw Conservatory of Music, graduating in 1932. She continued studying composition in Paris and went on to participate in numerous concerts and festivals. She performed as the principal violinist in the Polish Radio Orchestra. Her compositions, many of which feature the violin, garnered her a host of prestigious awards. However, outside of her native country, as Kurkowicz discovered, many of her works had never been recorded or performed.

“I started to perform her pieces at concerts,” said Kurkowicz, who serves as concertmistress with the Boston Philharmonic. “And then I realized that there are not so many recordings of her. My first project was to record her violin sonata. ... Between those years, 2002, let’s say, and now, I became sort of a specialist on the music of Grazyna Bacewicz. I performed a lot of her solo sonatas, and all of her violin concertos. I feel very close to her music, that’s for sure.”

In classical circles, the rediscovery of Bacewicz’s expansive body of work, which Kurkowicz has been steadily recording and releasing through Chandos Records, has generated considerable excitement, garnering a nomination for the German Record Critics’ Award, the Diapason d’Or in France, and the respect of critics all over the world.

“I never have received so many reviews in my life,” Kurkowicz said with a laugh in our phone interview.

The seven concertos Bacewicz composed for violin and orchestra—with the exception of No. 6, which survives in manuscript form but which Bacewicz mysteriously never published or performed—seem perfectly tailored to Kurkowicz’s musical sensibilities. An accomplished violinist herself, Bacewicz’s intimate knowledge of the instrument shows itself in her many compositions featuring the violin. In the liner notes of her second Bacewicz recording, Kurkowicz writes, “It is obvious Bacewicz herself studied each passage from the kinesthetic point of view to provide the best solution for achieving the desired sound. Her choices of sonorities, articulations, tempos—even fingerings—in the musical text suggest a deep understanding of the instrument, which draws me even closer to her music.”

Kurkowicz’s intimate knowledge of Bacewicz, the composer, drove her to learn more about Bacewicz, the woman. Poring through the few books available on Bacewicz, one of which contained her essays and letters (she was also a writer, Kurkowicz informed me), reviews of her concerts, and features in old Polish magazines, Kurkowicz was able to assemble a rough portrait of the composer’s personality: “She was pretty much a workaholic. She died very early”—at age 59—“yet she wrote an amazing amount of work, not only for violin but also for piano, symphonic works—she was fast. She was a person who works twice as fast as everybody else.”

One passage, quoted in the book Distinguishing Mark, is particularly indicative of the composer’s frightening work ethic: “Nature bestowed on me a certain talent and also a little something that enables me to use this talent,” Bacewicz wrote. “Deep inside I possess a miniscule invisible motor that allows me to accomplish a task in 10 minutes that would take others an hour or more. Thanks to this I run, not walk; I speak fast, even my pulse beats faster than normal, and I was born two months premature.”

Bacewicz was capable of creating masterful pieces in record time. So why aren’t her many achievements renowned outside Poland?

“Because of the Iron Curtain, composers were sort of stuck there and they couldn’t go out to perform or to compose,” Kurkowicz explained. “She was unlucky that she was born during those times.”

Throughout World War II, Bacewicz lived in Warsaw, where she continued to compose. During the Stalinist period, artists of all disciplines suffered from the censorship and ideological control that accompanied the enforcement of “socialist realism.” (Art that was considered “decadent” or “degenerate” or that didn’t glorify the proletariat struggle—happy factory workers, muscled peasants—was out.) So Bacewicz began to organize secret underground concerts, where she premiered new works such as her Sonata for Violin (1941) and Suite for Two Violins (1943).

“For some reason, I feel a very close relationship with this working woman who accomplished so much—whose music, if she would be a man, probably would be so much more known—during the very hard times in Poland, in the Communistic regime,” Kurkowicz said.

On Saturday, March 10, Kurkowicz and the San Luis Obispo Symphony will present “Classical Sketches,” a concert featuring, alongside the music of Schubert and Bartok, the U.S. premiere of Bacewicz’s third violin concerto, a work whose Slavic influences seem to convey the composer’s love for her country.

“I think it’s one of the strongest of the concertos,” Kurkowicz explained of the selection. “It’s very romantic. … There’s also the Polish folk element in it, which I wanted to really show. That last movement is this wonderful, fast Polish dance called oberek. It’s fabulous; it’s just really effective.”

In the violin concertos that directly followed No. 3, Kurkowicz speculates in her liner notes that Bacewicz’s celebration of her homeland is replaced by a desire to get out of it; each of the following works grows gradually more cosmopolitan and experimental.

But newcomers to Bacewicz’s work, she went on, are best starting with the more accessible No. 3.

“I want to introduce Concerto No. 3, so people get acquainted with this composer, from her romantic side,” she said. “From her Polish side, let’s put it that way.” ∆

Arts Editor Anna Weltner strives to put her best side forward. (It’s No. 3, too.) Contact her at aweltner@newtimesslo.com.