Editor's note: While his wife was out of town, Glen Starkey teamed up with stand-up comedian Cori Ramsay for this week's Split Screen. 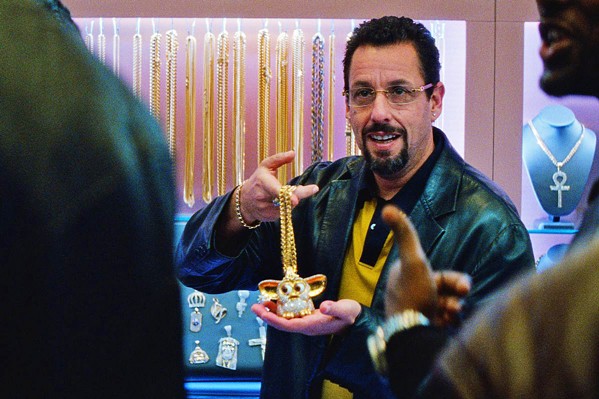 Glen Are you feeling too calm and relaxed, or is your blood pressure too low? Go see Uncut Gems! It will snap you right out of your tranquility and bathe you in frenetic anxiety! Sandler is terrific as the manic Howard Ratner, a degenerate gambler whose professional and family life is a house of cards. He's a jeweler who specializes in gaudy high-end pieces for black sports stars and entertainers. They are guided to his hole-in-the-wall store by Demany (LaKeith Stanfield), who brings in former Celtics basketball star Kevin Garnett (playing a fictionalized version of himself). Part of the story surrounds Garnett's obsession with a chunk of uncut black opal that Howie has smuggled into the country for an auction. He "loans" the piece to Garnett and holds his championship ring as collateral, but later pawns it for money to place a bet on the Celtics. Meanwhile, he's being threatened by Phil (Keith Williams Richards) and Nico (Tommy Kominik), who work for Howie's brother-in-law, Arno (Eric Bogosian), to whom Howie owes $100,000. Howie keeps believing if he can make one giant score, either through his bets or the black opal auction, he'll settle his debts and everything will work out. Then there's his wife, Dinah (Idina Menzel), who's fed up with his behavior—inattentive parenting to their three kids, not to mention a girlfriend on the side (Julia Fox). Howie's got a lot of balls in the air, and Sandler plays him as a fast-talkingshyster who lies to everyone. Following him through the chaos of his life is exhausting but entertaining as hell. Once again, Sandler proves that when given the right material (Punch-Drunk Love, Funny People, Reign Over Me), he's a formidable actor.

Cori I went into this film completely blind. I had no idea what to expect and I left feeling stimulated to the point of panic. Prior to my viewing of the film, I was at brunch drinking a bloody mary and smoking a joint—it was a relaxing Sunday. That really didn't matter, though, because this movie sobered me up quick. I have never understood how Sandler can be simultaneously the biggest asshole in the room and also the sexiest. He is so pathetic and desperate in this movie. He's manic and powerful, and he's disgusting and confident. He's clearly an addict, and I am ashamed and impressed with how skillfully the creators of this film made me relate to him. Glen didn't touch on this too much but Howie's side-piece, Julia, might be the sexiest, most vapid woman I have ever seen. Her butt, wow.

Glen Yep, newcomer Fox is rocking the kadunkadunk big time. Not only is she Howie's "side-piece," she's also his employee at his jewelry store because he's absolutely addicted to risk! He's always living life right on the edge, going full tilt. At first, it seems like Julia's just in it for his free apartment and his free-spending ways, but she's actually in love with the lout and seems attracted to his recklessness. It's definitely a character trait I don't get, but Howie comes off as a real person rather than a caricature. It's clear that Julia is much better suited to him than his wife, who's divorcing him as soon as possible. Some of the best moments are Howie and Dinah's bitter and exacerbated interactions and Howie's interactions with his Jewish family and its patriarch, Gooey (Judd Hirsch). By all accounts, it's an insightful look into an extended New York Jewish family. A lot of these actors are first-timers. This is Fox's first feature-length film, and it's also Williams Richards' first credit. He's great as Phil, Arno's strongman who develops an angry fixation on Howie. I've also got to give a nod to Garnett. Usually when you get a sports star to play himself, he comes off as wooden and he's more interested in making himself look good than being an authentic character. Not Garnett. After the NBA, he could have a credible career as an actor. This film might make you feel uncomfortable watching it, but there's no denying its powerful energy. It's among 2019's best!

Cori Absolutely uncomfortable. I could not wait to leave the building and find my way into the nearest sensory deprivation tank (the bar). Something I really appreciated about the movie was the directors' timing. They knew exactly how to keep a fast-paced rhythm with a punctuated build up. Every time I wanted to put Howie out of his misery, they slowed it down just enough for me to support his exhausting lifestyle. I wanted to crawl out of my skin and into Julia's just as much as he did. Garnett must've done an excellent job because I found him frustrating and pretentious. That being said, he is a Celtic, so perhaps he wasn't acting at all. I'd agree that Dinah and Howie's limited interactions were some of my favorites and also the only place that you really saw Sandler the actor. Only a few times did the film grant us permission to remember who was playing Howie and I found those moments to be treasures—tiny moments of relief.

Glen This film has been praised by critics but it seems audiences don't like it quite as much. Its Rotten Tomatoes score is 93 percent critics vs. 54 percent audiences. I'm guessing a lot of attendees didn't like the way it made them feel, or they simply didn't connect with Howie's humanity. Even though he's a horrible person, I couldn't help but root for him to win, perhaps because he's a classic underdog. It's a draining but brilliant piece of cinema.

Cori Audiences didn't love this film because audiences are people and people are afraid. This film is a fantastic articulation of the anxiety of existence. Please watch the movie and appreciate its attention to detail. Its structure and ability to force you to empathize is literally breathtaking, and I will never watch it again. Δ