Undermanned: As Paso Robles grows, its fire chief argues for a bigger department

Paso Robles is rebounding nicely from the gut punch of the Great Recession.

Tourism is booming thanks to the North County wineries. City officials have their hands full with new housing and hotel developments, fitting nicely into the City Council’s long-term plan to grow Paso Robles to 44,000 residents by 2045. The city currently has a population of about 31,000.

But more residents, visitors, and buildings bring inevitable risks and costs that the city is now confronting—with an important one being fire safety. 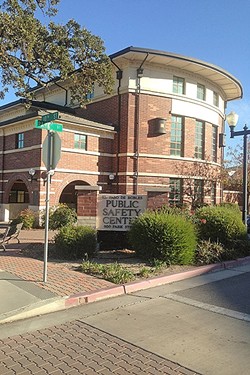 In the wake of the recession, Paso Robles cut its workforce by 30 percent, including the loss of seven positions in the fire department. While a 2000 “Growth Management Plan” stipulated that the fire department should have 31 employees by now, they only have 24 as of December 2016.

During the lean years, Paso Fire Chief Ken Johnson said his department did the best it could to protect the city with the resources they had. But he’s increasingly worried that they are reaching a breaking point, especially with the expansive direction the city is heading toward.

“I get a little bit concerned,” Johnson told New Times, “because while we were never adequately staffed, having lost those positions, it’s only gotten worse. Our population continues to grow, and the things that are built here continue to be built. … It’s as if we’re getting a little bit further behind all the time.”

The data show that Johnson has reason to worry. Paso’s population is growing—up 7 percent since 2008—and the number of emergency calls per year jumped 31 percent in the same time frame.

The workload is wearing on the department, Johnson said. Last year, a battalion chief left the city because he’d been overworked, leaving only Johnson and one battalion chief to handle supervisorial duties.

Even with the economy rebounding, the funding hasn’t been available to boost emergency personnel.

“As the money becomes available, the council just has to decide how it’s best spent, and they’ve chosen to [spend it] in other areas,” Johnson said.

At a Nov. 15 City Council meeting, Stewart Gary of CityGate Associates, a consulting firm, presented a report to the City Council explaining the shortfalls of the current fire department. Gary said that Paso’s two fire stations, two engines, six minimum daily firefighters, and two supervisorial positions are insufficient to meet the needs of the community in both the short and long runs.

He recommended that Paso hire more firefighters to raise the minimum daily staffing to eight or nine to help cover simultaneous emergency medical service (EMS) calls. He also suggested crafting a master plan to mark the department’s long-term goals, which may include building a third station to better service the northeast end of town.

The report also explained how Paso’s location at the north end of SLO County made mutual aid response from Cal Fire or Atascadero less reliable.

“You’re kind of the north cul-de-sac of the county,” Gary said.

In response to the report, the council voted to schedule a workshop to continuing the discussion and hear more input from the public. The workshop is set for Jan. 12 at 6:30 p.m. in the Paso Robles Public Safety Center.

“It would behoove Paso citizens with an interest in the quality or level of emergency medical, fire, and rescue services we provide to be in attendance,” Fire Chief Johnson said.

Paso residents provided some input at the Nov. 15 meeting. A few spoke in support of bolstering the department while others felt money could be better spent elsewhere.

“Your city fire department is undermanned and at risk, both for the firefighters and the public,” resident Cody Ferguson said. “You can’t keep growing this city without improving and expanding the infrastructure. At the heart of adequate infrastructure is public safety.”

“I think the city is better served by hiring more police, considering the fact that we have gangs that have been growing,” he said.

Leveraging more money to grow the fire department won’t be easy, but Paso Mayor Steve Martin said it’s likely necessary given what’s in store for the city in the coming years.

“There’s a point of diminishing returns,” Martin said. “A new house doesn’t mean we’re better off as a community if we can’t keep the people in that house safe or keep it from burning down.”