The only complaint I have when it comes to The Dark Knight, a nearly flawless film, is how much it tends to overshadow its predecessor, Batman Begins. In fact, many people didn't even realize The Dark Knight was a sequel, at least at the time of its release. It's a testament to how well the film stands on its own, but I still can't help but pity those poor, unfortunate souls who missed out on Christian Bale's first outing as the Caped Crusader. 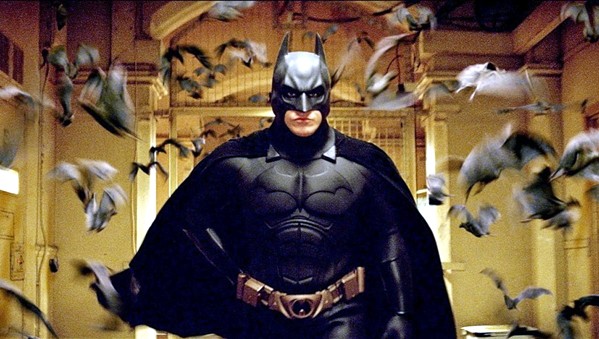 It had been eight years since the ultra campy Batman & Robin (1997)—universally hated, except by ME of all people (but that's a discussion for another time)—graced theaters only to be met with boos and walk-outs. Enter director Christopher Nolan, a man with a vision. A vision so pure, so godlike, it nearly blinded my unworthy mortal 12-year-old eyes as I sat in awe, staring up at a screen inhabited by a sword-wielding ninja version of Liam Neeson (this was three years before Taken, mind you, so he wasn't exactly the rich man's Chuck Norris yet).

I'm of course recalling a specific sequence in the film in which Henri Ducard (Neeson) and Bruce Wayne (Bale) are duking it out on a glacier. The constant cracking of the ice combined with Hans Zimmer and James Newton Howard's taut score is haunting. Sorry if this sounds like I'm geeking out on an unhealthy level, but I'm already too many words in to go back and take a more objective stance.

And while I'm at it, I think enough years have passed to discuss the twist with Neeson's character. Although he is Wayne's mentor, providing him with the necessary martial arts training to later become Batman, Ducard's true identity is Ra's al Ghul—the film's big baddie. What made the reveal interesting was the fact that Batman didn't have to square off against a costumed villain for once, although we still get one in the form of Dr. Jonathan Crane, aka Scarecrow (Cillian Murphy).

Murphy is chilling in the role, although the character is ultimately just one of Ra's al Ghul's pawns. The same can be said of mob boss Carmine Falcone (Tom Wilkinson). The film is full of bad guys, which is ironic because its biggest strength is prioritizing focus on Bruce Wayne/Batman (obviously not one of my strengths so far). Prior Batman films were consistently criticized for their "villain of the week" attitude, but Batman Begins was inarguably the first to break that curse.

I haven't even touched on Bale's performance, which is a massive shame on my part, because he's brilliant. I get why people love to make fun of his growly Batman voice, but I feel like he gets it just right in this one. It's the other two where things go overboard ("WHERE'S THE TRIGGER?!"). (140 min.) Δ