I was first introduced to Hansel and Gretel: Witch Hunters by one of my college roommates, who wanted something fun to watch one day and knew that I liked Jeremy Renner. She told me that it was a bit over the top and extremely bloody, but that it was also a really great time. It did not disappoint one bit, and to this day I still don’t understand why I never hear more people talking about this movie.

In a nutshell, Hansel and Gretel: Witch Hunters answers the question of what happened to those two children in the classic fairy tale after they killed and escaped from the witch who tried to eat them. As the title implies, Hansel (Renner) and Gretel (Gemma Arterton), now adults, have made names for themselves traveling around and hunting witches. The story really begins when they are hired by the mayor of a town with a particularly bad witch problem, but with the exception of their biggest fan, Ben (Thomas Mann), the rest of the town doesn’t trust them.

My favorite thing about this movie is the world building. Though the timeline is never explicitly stated, it seems to take place somewhere around the middle ages. However, it also has a kind of steampunk vibe to it, using a lot of modern-day gadgets that have been made to appear more primitive. For example, at one point Gretel revives someone with a defibrillator that must be charged by hand cranking it, much like an old-school car window. These gadgets are particularly fun when they’re used to aid in witch hunting, even when you know they’re probably defying the laws of physics. 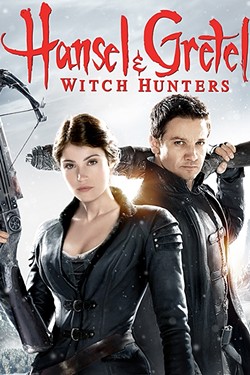 Another aspect of this movie that I find fascinating is the fact that Hansel is diabetic. I rarely see diabetic characters in any movies, let alone ones from this time period, but the blending in of modern equipment is at work here again, giving him a massive syringe for his insulin and a timer on his wrist telling him when to take it. Granted, the movie’s portrayal of diabetes is overly simplistic to the point of inaccuracy, but it’s still really neat to see something like that featured so prominently.

Some feminists might have a difficult time with this movie due to its frequent use of the word “bitch” and the fact that Gretel is nearly sexually assaulted at one point, but in most respects it keeps things surprisingly equal. The male and female characters all take turns rescuing each other, getting beat up, and beating up other people. Not to mention the fact that the majority of the main characters are female, and that this movie technically passes the Bechdel Test (which asks whether a story features at least two women who talk to each other about something other than men).

If you want the kind of movie that’s designed for deep thinkers, or if you faint at the sight of blood, then Hansel and Gretel: Witch Hunters is probably not for you. But if you want a movie with a cool story, an interesting setting, great characters, and non-stop action and delight, I cannot recommend it enough. (88 min.)