When you hear the name Judd Apatow, you’re reminded of the adult humor he expresses across the screen with actors such as Seth Rogan, Paul Rudd, and Will Ferrell. The most notable movies he’s written include Pineapple Express, This is 40, Knocked Up, and The 40-Year-Old Virgin to name a few. But before Apatow was helping 40-year-old Andy (Steve Carell) lose his virginity to a new love interest or Alison (Katherine Heigl) and Ben (Rogen) man-up to have a baby together after a one night stand, Apatow was giving kids a sense of comfort about their body contrary to society’s elite skinny standards.

Let’s give a big Camp Hope “Hi-Hi-Hiya!” to the underrated 1995 Walt Disney Pictures film Heavyweights, a story about boys going to camp to enjoy the summer of their lives but arriving to a new camp owner who’s main focus is to franchise on the campers losing weight. 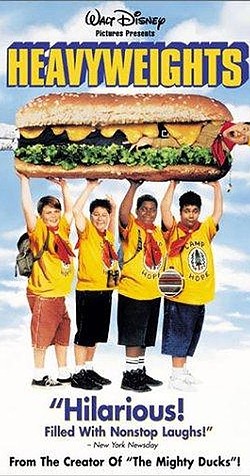 True to the ’90s feel of summer vacation, we meet Gerry Garner (Aaron Schwartz) walking out to papers being thrown about like confetti and young couples kissing—school’s out! Gerry has big plans to hang out with friends, but his dad has bigger plans, sending Gerry to camp, fat camp! Gerry stands his ground; he’s not going—cut to the next scene of an airplane and you can’t believe that he’s in a seat traveling to Camp Hope. He meets Roy (a very young future SNL Cast Member Kenan Thompson), who assures him that he’ll have the best time at Camp Hope because he won’t be singled out as the only fat kid in camp, everyone is fat.

I commend Apatow, writer of the film, for taking a rather touchy subject and turning it into a light-hearted comedy. These kids come to camp to be their truest selves with others that look like them, free from the judgment of their families. Seeing the movie again after watching it so many times as a kid, I realize how serious the topic is and how vulnerable the campers were made to feel because the were “overweight.”

Back to the story: Instead of the annual welcome orientation, the boys are greeted by the new owner. Cue in the energizing pop tunes and in comes Tony Perkins (Ben Stiller). Tony is an over-the-top proclaimed fitness coach who wants to create an infomercial about his efforts to successfully help these boys lose weight. Leave it to the boys to hilariously reclaim their beloved camp and stop the psychotic Tony Perkins from ruining their summer. Of course, Stiller does a great job of coming off as insane and arrogant to a bunch of teenagers who have more self esteem than he does.

The dialogue perfectly captures the essence of innocent teenagers just wanting to have a fun summer with friends, so of course there’ll be laugh-out-loud immature jokes about butts and “skinny wieners.”

One of the funniest scenes, and trust me there are many, is when the boys are unloading their stow away candies and snacks that they’ve kept in hidden luggage compartments and underneath their clothes.

I watched this movie a million times in my middle school days and recently watched it when it resurfaced on Netflix. It was definitely a welcoming wave of nostalgia and seeing a young Stiller terrorize these kids only to be duped by his own tricks is the perfect laugh-out-loud comedy for the whole family. (100 min.)