Underrated: I Am Heath Ledger

The first 40 seconds of I Am Heath Ledger, a new documentary about the ill-fated actor, are perhaps the most revealing of the entire film. In those brief moments, the distorted image of the actor hangs sideways in the camera frame. Then, as Ledger rights himself and flashes a quick smile, the audience truly sees him for the first time, briefly. He is a young man, face marked by hints of acne and stubble. And just as quickly as he appears, he is gone.

It’s an apt metaphor for the rabid public demand for information that follows a sudden death like his. Fans and onlookers are practically greedy for insight into why and how someone so famous and so promising would fall in such a way. As we try to rationalize or attach significance to a person’s death, oceans of mythos quickly engulf the actual human being. Adrian Buitenhuis and Derik Murray’s film attempts to tackle some of that distortion of Ledger’s image and present a simple portrait of a young man who loved his family and wanted to be a good actor. 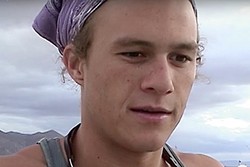 Ledger died at the age of 28 in what medical examiners determined was an accidental overdose of prescription medication, just as he was reaching the pinnacle of stardom. But if you’re looking for a salacious film that will take you into the dark world of Hollywood’s drug addled nightlife, this isn’t for you. Told through narration by his family and friends, utilizing video shot by Ledger and his family, the documentary rakes through his childhood in Perth, Australia, to his rise in Hollywood and eventual death.

The film chronicles the steps in Ledger’s meteoric ascension into Hollywood history. Friends such as musician Ben Harper give insight into moments that are canonical in the Ledger mythos, explaining to audiences how he was feeling at particular key moments in his career or what led him to make key choices that turned him into a star. The documentary makes it clear that Ledger wasn’t just content to be a famous actor; he wanted to be a good, if not the best, actor.

The effect of hearing a deceased person, especially one who died so young, narrate their own personal life history is nothing short of chilling. The dynamic of hearing his bright optimistic voice spliced next to the words of his mother and father, their voices still choked by the spectre of loss, is equally impactful.

It would be foolish to assume that a documentary made in such close collaboration with family members (including the actor’s father, Kim Ledger; mother, Sally Bell; and sister, Kate Ledger) would truly show the flawed side of its subject, and this film certainly doesn’t take that bold step, either. The rougher times of Ledger’s life (including his breakup with actress Michelle Williams, mother to his daughter, Matilda) don’t just feel glossed over, they’re practically buffed and polished.

But if they do take measures to avoid darkening his public image, they make no attempt to hide the very real and devastating impact of his death. When his mother and father describe how they not only had to mourn the loss of a son, they had to do it under the intense heat of public interest, the intimacy almost feels invasive.

If you’re interested in seeing more of what a megastar is like away from the red carpet or if you just want to learn more about Ledger and his all-too-short life and career, I Am Heath Ledger serves as a fitting tribute. Tragedy rubberneckers seeking more answers about his death will likely find themselves more frustrated than fulfilled, however. (115 min.)