Two LAPD homicide detectives are dispatched to Nightmute, a small fishing town in Alaska, to assist with an ongoing murder investigation. One half of the duo, Detective Will Dormer (Al Pacino), looks exhausted from the moment we meet him. We soon come to realize he's become drained due to a recent scuffle with internal affairs. Perhaps an escape from the hustle and bustle of LA will do him some good? 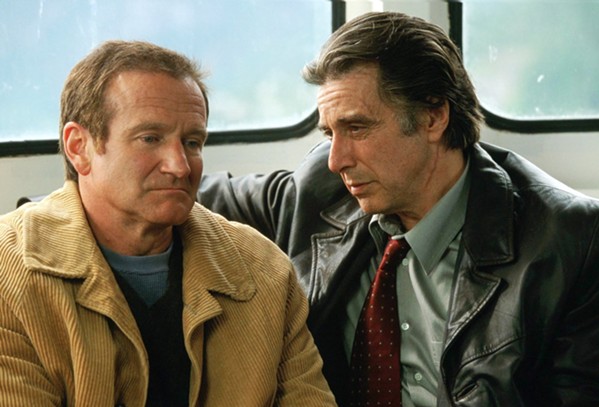 "Good guys, bad guys, and a lot less public relations. ... Except for this," Nyback says as he hands a case file to Dormer. Inside the folder are photos of a 17-year-old girl's rotting corpse. This is Kay Connell, whose body was found wrapped up in garbage bags at the town's dump. Dormer's sleep deprivation is about to become a whole lot worse. And the town's perpetual daylight isn't going to help either, thanks to Alaska's midnight sun (the film takes place during the summer).

This is the initial set-up for Insomnia (2002), director Christopher Nolan's (Memento, The Dark Knight) American remake of the 1997 Norwegian film of the same name. I've seen both, but the remake much more recently, and if I'm being honest, much more frequently over the years. What keeps bringing me back? Pacino vs. Robin Williams. It's that simple. It's the celebrity showdown I never guessed I would have needed in my life. How Nolan ever guessed pitting Scarface against Mrs. Doubtfire was a great idea must have been divine intervention.

Without giving away too much of the mystery that unfolds, Williams plays Walter Finch, a local author who becomes a suspect in the case due to his "mentorship" with the decedent, who aspired to be a writer someday. Dormer is pretty much convinced Finch is the killer from the get-go, but a certain event takes place early on in the film that forces Dormer to tread lightly, as Finch is the sole witness to said event. In other words, Genie's got some dirty deets on Michael Corleone.

The cat-and-mouse relationship between Pacino and Williams is at the heart of Insomnia, but the film's other body parts are nearly just as meaty. Hilary Swank gives a stellar supporting performance as Nightmute detective Ellie Burr, as does Maura Tierney as a hotel owner who Dormer confides in one night, his seventh without sleeping a wink. Add to the mix an unsettling but beautiful score, cold, calculated direction, and an eerie, morbid atmosphere ironically drenched in sunshine, and you've got Insomnia. (118 min.) Δ