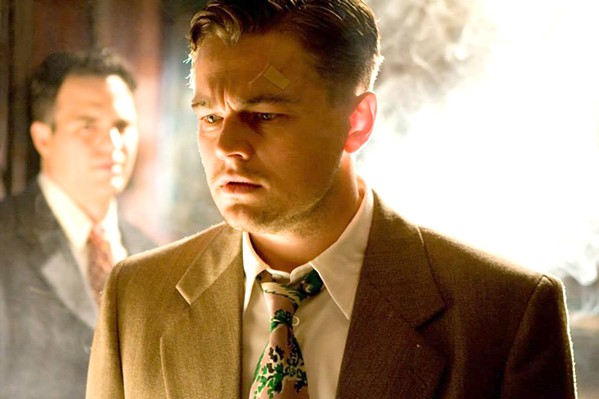 OK, OK, I know what you're thinking: "How is Shutter Island, a movie directed by Martin Scorsese and starring Leonardo DiCaprio—two of the most well-known people in the biz—underrated? Do you even watch movies?" Well, no, not really. But it's not because I'm too busy reading or being productive. I play video games instead. Regardless, I can justify this selection: but first, context.

Almost the entire film takes place at fictional Shutter Island, which is located off the coast of nonfictional Massachusetts. The island is home to Ashecliffe, a psychiatric hospital full of patients who've committed violent crimes. DiCaprio plays the role of Teddy Daniels, a U.S. marshal who is sent to Shutter Island with fellow marshal Chuck Aule (Mark Ruffalo), who are working together for the first time, to investigate how a missing patient escaped from her locked room.

When the marshals arrive at the island, they are greeted by armed security guards who demand Teddy and Chuck turn over their firearms before proceeding forward. After doing so, the marshals begin looking for the missing patient—who was sent to Ashecliffe after drowning her three children—but find the doctors, guards, and staff at the hospital to be less than helpful. From there, the movie sets off on a course full of twists and turns, some of which may be predictable but are enjoyable nonetheless.

The film is drenched in a dark and unnerving atmosphere that supplements its plot well. Modern classical music plays throughout and ramps up at just the right moments, while dreary shots of the ocean lapping up against the island's rugged coastline create an uneasy sense of loneliness and isolation. But the clincher is the clever use of dreams and flashbacks that show the darkness within Teddy. In a number of these events, he's shown liberating a concentration camp as a U.S. solider during World War II, while the camera pans over piles of frozen corpses. In others, he's shown having conversations with his wife, who died years ago in a fire.

The film was released in February 2010 and did well in the box office, whatever that means, and received solid but not great reviews from critics far more knowledgeable about films than I am. As illogical as it may sound, I've always felt like Shutter Island gets unfairly compared to and overshadowed by Inception, which also featured DiCaprio and came out in 2010. The latter received critical acclaim and rave reviews, while the former didn't, which I never understood.

In addition to the lukewarm response to the film, I learned through my extensive research of Googling "ranking Martin Scorsese movies" that Shutter Island is widely regarded as one of Scorsese's weakest works. Now that's just outright blasphemy. Is it the best of the 10,000 movies Scorsese has directed? Probably not for most people, but it's the best of the three that I've seen. Sure, that isn't a huge sample size, but as we've already established, I don't watch a lot of movies. Δ