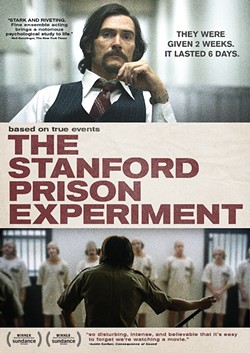 Jails are front and center in our local news right now, so when I was perusing Netflix for a film to review in New Times this week, the 2015 independent flick Stanford Prison Experiment immediately piqued my interest.

Of course, anyone who's taken an introductory psychology class has heard of this notorious real-life study gone awry, where psychologist Phillip Zimbardo built a simulated jail in the basement of the Stanford psych department in 1971 and had participants play inmates and jail guards for two weeks. Zimbardo's idea was to observe how their behavior changed when sorted into these respective roles and immersed in a prison environment. He decided to take extra steps to dehumanize the inmates, asking the guards to strip them into gowns and provide them four-digit numbers for their identities. He gave the guards supreme authority and simple instructions: keep order in the jail without resorting to corporal punishment.

The experiment didn't last two weeks. It didn't even last a week. The participants—and Zimbardo himself—became completely wrapped up in the simulation and allowed the prison to spin out of control in disturbing ways.

Stanford Prison Experiment director Kyle Patrick Alvarez brings this chilling story to life in fastidious detail. While I remember learning the basics of the experiment in school, the film dramatizes the whole tale from start to finish, seemingly leaving no stone unturned. And it is the nuances that make this retelling so good. Details like Zimbardo's partnership with a former San Quentin prison inmate to help make the environment more realistic, and a scene where a passerby Stanford professor bumps into Zimbardo and subtlety questions the science and methods of the experiment, add great texture to the mostly heart-thumping action. The movie is boosted by stellar performances from Billy Crudup as the possessed and obsessed, highly egotistical Zimbardo; Ezra Miller as Daniel Culp, one of the lead prisoner protagonists; and Michael Angarano as Christopher Archer, the most brutal and psychologically abusive of the prison guards.

It's unbelievable how dark and out of control this fake prison got—but that's the point. I think the underlying takeaway from Alvarez's delivery of this story was not only did the prison guards lose sight of themselves and abuse their power, but so did Zimbardo. It took a demand from his girlfriend Dr. Christina Maslach (Olivia Thirlby), who got a glimpse of what was transpiring, for Zimbardo to realize the simulation needed to end six days in.

With too much unchecked power and the right (wrong) conditions, human beings are capable of horrendous evil. That's true of fake jails, as well as real ones. (122 mins.) Δ