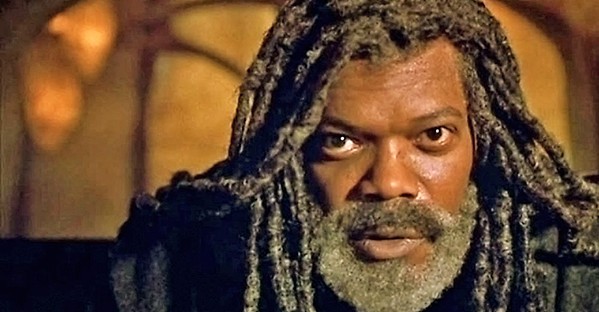 In this day and age, when half-priced candy is available the day after Valentine's Day, is it a sin to review The Caveman's Valentine a week after the holiday has come and gone? Late or not, there's no such thing as the wrong time of year to enjoy a solid Samuel L. Jackson flick.

"There is something I kind of got my heart set on," Jackson's character, Romulus Ledbetter, tells his adult daughter, Lulu (Aunjanue Ellis), after she asks him what he wants for Valentine's Day this year.

"It's something I want more than chocolates or a car or ... "

"The autopsy report of Scotty Gates."

Lulu's reaction is less than enthusiastic. Would she rather he ask for a car? Full disclosure: Romulus is a homeless schizophrenic living in a cave in Inwood Hill Park in New York City. Lulu, estranged from her ill father for most of her life, just happens to be one of the police officers that responds to his 911 call from a nearby pay phone. The call is made after Romulus, or "Caveman" as he's nicknamed by other members of the homeless community, finds a frozen corpse (the body of this Gates fellow) perched on a tree outside of his cave.

Although he never knew Gates, Caveman quickly becomes determined to unleash his own brand of justice upon whoever's responsible for his death. There's only one suspect on Caveman's list: Cornelius Gould Stuyvesant, an evil man who lives on top of the Chrysler Building and controls not only New York City, but the entire world through Illuminati-esque connections, hypnotic rays, and other sinister tactics.

Caveman's reaction to this entity is bipolar, though. Some days he seems deathly afraid of Stuyvesant. He'll avoid looking at the Chrysler Building and display signs of physical pain at even the slightest glance—as if it's the eye of Sauron. Other days he's able to fearlessly glare at the tower while shouting obscenities toward his sworn enemy.

"You know it's bullshit, right? It's not reality," one woman tells Caveman after she hears him spewing his tall tales.

"No, of course not," he replies. "Stuyvesant's much truer than reality. Stuyvesant invented reality."

Caveman believes Stuyvesant is the source of all evil—"tax collectors, police brutality, drug wars, backed-up toilets," in his own words. The only time he's not thinking about how much he hates Stuyvesant is when he's composing music, taking notes on whatever stationary is available to him when a melodic epiphany strikes. It's revealed early on that Caveman was a Juilliard-trained pianist before retreating from his career, his family, and society as a whole in favor of the cave he would call his home.

What makes The Caveman's Valentine worth watching isn't so much that it's a compelling mystery—although it's definitely not a boring one. The real reason to give it a chance is Jackson's dedicated performance. It's as if Thanos snapped his fingers long before Avengers: Infinity War, as Jackson faces a similar fate to that of his Nick Fury character—he completely disappears into the role. (105 min.) Δ