Underrated: The Color of Friendship

You didn't really grow up in the late-1990s, early-2000s if you never watched a Disney Channel Original Movie. Since Disney Channel's establishment in 1983, the cable channel has produced television films.

I often have lengthy discussions with New Times Calendar Editor Caleb Wiseblood about how meaningful, hilarious, and impactful some of these films really were. 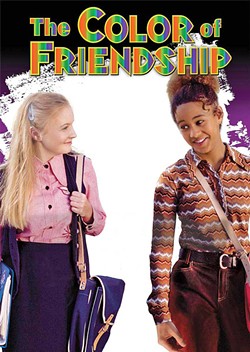 For your information, the best of these films were released between 1993 and 2003, just two years before the 2006 release of High School Musical (barf). It was a time of Airborne, Susie Q, Underwraps, Halloweentown, Zenon: Girl of the 21st Century, Smart House, and I could honestly go on for hours with how many greats there are.

But the one film that stuck out to me the most was The Color of Friendship, which came out in 2000. It takes place in 1977 Washington, D.C., where Piper Dellums (Shadia Simmons), an African-American girl, lives with her parents and two brothers.

Piper has taken an interest in South African culture and begs her parents to host an African exchange student. But to her surprise, the student, Mahree Bok (Lindsey Haun), is Caucasian and not at all how she expected. The girls have a rough start at getting to know one another. For starters, Piper didn't know South Africa had white people (shocker!), and Mahree didn't know that African-Americans could hold positions in Congress—Piper's dad is a congressman.

So the only encounters Mahree has had with anyone from another race is the family's black maid, Flora. When she meets Piper's family, she's taken aback by their middle-class lifestyle.

There's another pivotal moment in the movie where the two experience another type of racism that makes them both rethink how to treat people from other walks of life. But I won't ruin that for you.

As Disney would have it, the girls of course figure things out, become friends, and learn a thing or two about racism and how to oppose it.

When this film came out, I was 8 and wasn't aware that racism existed, as the condominium complex I grew up in housed people from different races and ethnicities. The Color of Friendship made me realize that we're not all treated equally. While some messages might have flown over my head then, watching it as an adult, this movie did more than just sugarcoat a happy ending. It told the story from two sides, which is often rarely done. (87 min.) Δ