A virus? Witchcraft? Performance art? Nobody quite knows what's causing a strange fainting epidemic in director Carol Morley's The Falling, primarily set in a British all-girls' high school in 1969. The first student to faint is Abbie (Florence Pugh, Midsommar), and she's followed swiftly by her best friend, Lydia (Maisie Williams, Game of Thrones). The school's principal, Miss Alvaro (Monica Dolan), initially calls both students out as fakers and condemns these instances as acts of defiance toward her, the school, and authority in general—or at least that's the way I interpreted their exchanges. Dialogue is minimal, but there are more than enough cold glares to deduce that Alvaro isn't the biggest fan of the duo. 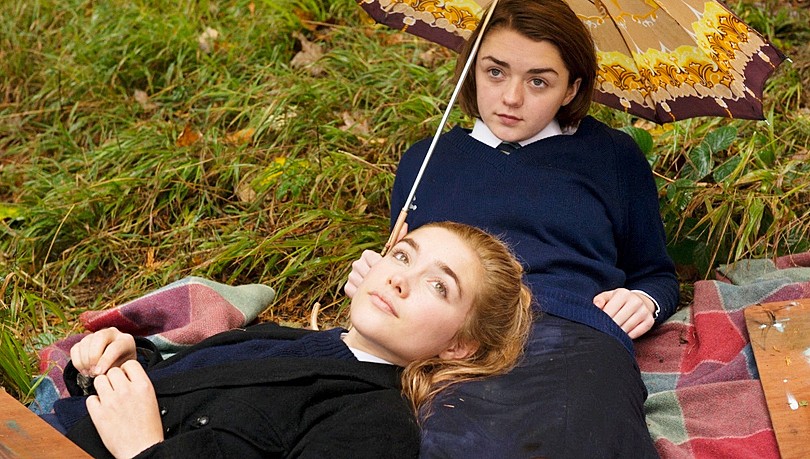 And I feel like that's pretty much the whole movie in a nutshell—lots of showing but no telling. But even most of what's shown is still abstract and up to interpretation. The relationship between Abbie and Lydia, for example, is never concretely defined. Things get complicated between the two after Lydia realizes Abbie has been sleeping with her half-brother, Kenneth (Joe Cole). It's clear that she's upset, but we're not sure if it's because she's attracted to Abbie or Kenneth (or both or neither). The scenes that follow hint at all possible conclusions, and we're left with a puzzle.

There are certain aloof qualities that give the film a detached, Kubrickian demeanor, which will either infuriate viewers or draw them even closer. I'm of the latter crowd, but far from claiming the film is perfect. Some viewers might be put off by the film's seemingly low stakes. Think Jaws, except the town is cursed with fainting women rather than a shark. That's not to say the fainting spells don't result in dire consequences for a character or two (not going to spoil it), but a lot of the fainting scenes lend themselves more to black comedy than psychological drama. The eclectic tone reminded me of other adolescent-driven genre-benders like Donnie Darko and Picnic at Hanging Rock.

I thought revisiting The Falling would provide some clarity on things I may have missed the first time around a few years back. But the film, and a lot of its symbolism, remains just as mysterious to me after seeing it again. If you want the truth, my honest reason for giving it a second watch was for Pugh, after being blown away by her stellar performance in Midsommar. This whole column was just an excuse for me to plug that film without actually reviewing it (Glen and Anna Starkey both gave it "Full Price," by the way). See both! (102 min.) Δ