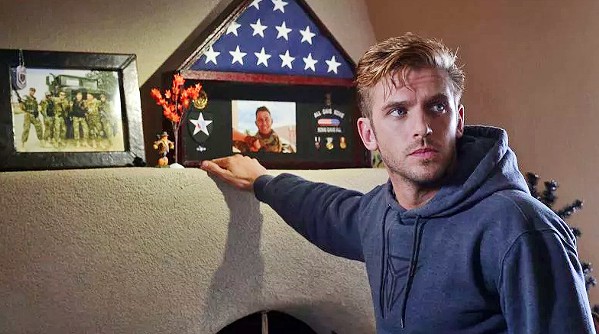 The late 1980s and early 1990s spawned a genre of movies playfully known as the "[Blank] From Hell." These movies, typically all psychological thrillers, touched on similar themes of unsuspecting good-natured people or families putting their trust in certain people because of their title or seemingly friendly nature.

There was the Cop From Hell (Ray Liotta in Unlawful Entry), the Neighbor From Hell (Kevin Spacey in Consenting Adults), the Nanny From Hell (Rebecca De Mornay in The Hand That Rocks the Cradle), and the unforgettable Roommate From Hell (Jennifer Jason Leigh, Single White Female).

All of these movies were relatively predictable—filled with just enough sex and violence to sell them to mass audiences and without any big twists beyond: "Holy crap, he/she is actually psycho/evil." For the most part, they were kind of cheesy and bad. But The Guest, released in 2014 and starring Dan Stevens, is a new kind of twist on the genre. And also, it's really, really good.

"[Blank] From Hell" all relied on audiences' innate sense of trust in certain figures, such as cops or doctors. We let complete strangers take almost immediate intimate positions in our lives, often due to necessity (Hand That Rocks the Cradle). But the genre pressed us to confront a disturbing truth: What do we really know about these people?

The Guest tackles this in an absolutely brilliant manner. Stevens plays an Afghanistan war veteran named David who appears on the doorstep of the Peterson family, announcing he knew their son Caleb. Caleb was killed in Afghanistan, and David seems to offer the slightly fractured family an opportunity for real closure. David quickly moves in and begins wedging himself into each Peterson family member's life in a way that seems unnatural but can be easily chalked up to the actions of a lonely war vet simply trying to reintroduce himself to civilian life. The device works brilliantly, especially on the unsuspecting Petersons.

David offers each member something they deeply need but are somehow lacking in their own lives. The filmmakers do a good job in exploring how we are tricked by our own latent desires, whether they be sexual, maternal, fraternal, or something else. The mother sees a lost boy like her own son; her daughter sees a dangerous sexual force who can deliver something more than men like her unmotivated and deeply boring boyfriend. The young son, grappling with his own sexuality, experiences the raw exhilaration of unchained hyper masculine brutality David shows him for the first time. The father finally finds a sympathetic ear for his tedious problems at his white-collar job.

Stevens, far removed from his days as the swoon-worthy Matthew Crawley on Downton Abbey, is an absolute master at his craft; his David is sexual and innocent, deadly and weak, and charming and terrifying all in the same bat of an eye. He has taken a cartoon version of a villain (the twists are pretty laughable at times) and morphed him into a monster on par with some of the best in movie history.

While The Guest might have some problems with plot (the ending is a bit predictable although gloriously staged and shot), it's a brilliant and refreshing twist on a classic genre. (100 min.) Δ