Underrated: The Marvelous Misadventures of Flapjack

If you love candy, adventuring, and living in the mouth of a sweet and sassy whale, then grab your bag of jelly beans and tune into The Marvelous Misadventures of Flapjack. Thurop Van Orman, who also had a hand in the writing of The Powerpuff Girls and Adventure Time, created the animated show for Cartoon Network in 2008. 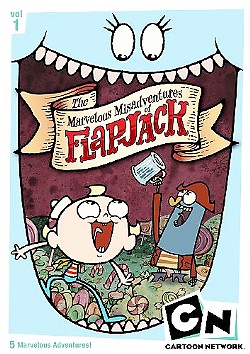 Aside from creating the show, Orman is also the voice of the main character Flapjack, an eccentric and naïve young boy with a thirst for adventure. Flapjack was found and raised by a talking whale, Bubbie. Let me repeat that Flapjack lives in Bubbie's mouth, a tooth is his front door and her tongue is his bed. Bubbie is everything you would expect from a guardian. She smothers Flapjack with love, motherly advice, and brassy one-liners.

Flapjack's life consists of adventures on the harbor called Stormalong. Most inhabitants of the harbor community are sailors covered in tattoos.

Flapjack's best friend and partner-in-crime is Captain K'nuckles, who I'm still convinced looks like a fish. K'nuckles is supposed to be an old Irish captain who claims to be the greatest adventurer in the world. But you can now usually find him and Flapjack at the local Candy Barrel—a bar that serves candy instead of alcohol—taking a swig of maple syrup. The duo get into hilarious predicaments in search of Candied Island, a wonderland made entirely of candy.

Although I've painted a picture of a childish cartoon, the show is anything but that. There are plenty moments of innocence as Flapjack prances around Stormalong greeting everyone and discovering the taste of actual flapjacks for the first time. But K'nuckles is addicted to candy; he's basically a watered-down alcoholic that will do anything to get his fix. K'nuckles is like your weird uncle who didn't amount to anything and sometimes uses you in his schemes.

There are other questionable characters, too, like Peppermint Larry, whose wife is made out of candy (he made his own wife, people); Sally Syrup; Eight-Armed Willy; and Doctor Julius Barber—a doctor that doubles as the local barber. It's just such a weird child's show that has a lot of adult humor, but doesn't every cartoon that's not on PBS or the Disney Channel?

The show is also unique in its creation. There are a lot of stop-motion animated moments in a 2-D environment thrown against watercolor backgrounds. It's antique looking, minus the close-ups that emphasize a character's wrinkles or nasty pimpled face.

I'll admit, sometimes after watching an episode, I just laugh because I don't know what I just watched. That's what I think makes the show so great. It's random, such as the creepy malnourished man with yellow-bug eyes warning the adventurers not to head west where dangerous creatures and the end of the world lie.

In the early episodes there were a lot of life lessons to be learned, but the episodes that followed were mostly about the repeated attempts to get to Candied Island. Sadly, the show ended with only three seasons under its belt and without the characters ever setting foot on the island—although Flapjack did get to lick it.

It's worth mentioning that a lot of the writers and artists went on to create their own series, such as Adventure Time, Regular Show, and Gravity Falls. (46 episodes, 30 min.) Δ