They may look like baby Christmas trees, but those rows of leafy plants in plain view from Los Osos Valley Road near San Luis Obispo have nothing to do with the holidays.

They're hemp plants, ready to be harvested for research purposes, according to the grower, Natural Healing Center.

"We're researching different strains and methods of cultivation," said Nick Andre, chief operating officer at the company best known for its storefront cannabis dispensary in Grover Beach. "The research institution we're working with has been doing ag research for decades." 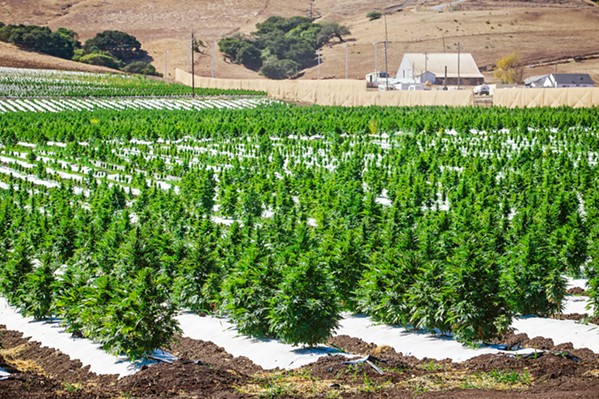 Since planting this summer, the 37 acres of hemp and accompanying beige fencing have drawn both grumbles and intrigue from drivers on the busy commuter road surrounded by ag land. Some complain about it as an eyesore. Others pull over to take selfies with the newly legalized plants. Some county officials and industry members question whether the grows are really for research.

Growing for ag research used to be the only way to legally farm hemp—cannabis's non-psychoactive sister plant. But that all changed this year with Congress' 2018 Farm Bill, which took hemp off the Schedule 1 substances list and opened up a commercial hemp market, largely driven by CBD oil demand.

But the hemp trade has faced a shaky regulatory roll-out in many areas of California, including in SLO County, where research partnerships remain one of the only legal ways to grow the crop. In June, about two months into the law change in California, the SLO County Board of Supervisors passed a moratorium on hemp farms in response to complaints from vineyard and wedding venue owners about how hemp's odors may impact businesses.

"Hemp is a federally approved ag crop, but it has issues," said George Donati, the vineyard manager at Greengate Ranch & Vineyard in Edna Valley. "It's all brand-new issues that the county's learning about and every resident and neighbor is learning about."

When the Board of Supervisors adopted the hemp moratorium, it stopped the county's active commercial hemp application process in its tracks. When the dust settled, the policy had allowed 17 growers to stay in business and kicked out nearly twice as many, 33.

"I showed up on the very first day," said Kyle Peters, who was SLO County's first hemp applicant and a casualty of the moratorium. "For a brief moment, there was a real dream that hey, maybe we can show people how to switch from vineyards into hemp as a way to diversify income. The county put the kibosh on all of that."

SLO was not the only California county that wanted to sit out the 2019 hemp season. Nearly half of the state's counties adopted moratoriums this year, wary of a new industry subject to cultural resistance and evolving state regulations. Kern County took the opposite approach and led the state with 76 hemp site registrations that covered 6,864 acres, according to the Bakersfield Californian.

"From my standpoint, it seems like [SLO County] is trying to stall for time, so the rest of the state industry can take off, and then people ignore SLO and they won't have to deal with it," Peters said.

Donati, with Greengate Ranch & Vineyard, said he and the owners at the wedding venue are tired of dealing with the impacts of hemp and cannabis in their neighborhood. Area residents and the county have accused Darren Shetler, a developer and owner of Pepper Tree Ranch next to Greengate, of violating local cannabis ordinances several times over the past two years.

"He hasn't been able to follow the rules so far. It's been an issue because of the major odors that come out of the property," Donati said. "For the event centers in the area, the adjacent agriculture that's going on, and for the residents, they're all complaining because of the odor and the allergic reaction from the odor."

The conflict in Edna Valley hit a boiling point around the same time that SLO County started accepting commercial hemp applications in May. Backlash against hemp in the Edna Valley was a driving force behind the supervisors passing a moratorium, multiple county officials acknowledged.

Shetler told New Times that the alleged violations on his property stemmed from the relocation of a cannabis farm from another site in the county to his Edna Valley ranch. In 2019, he began farming hemp there in connection with a research group he founded called HempAERO.

Lea, SLO's assistant ag commissioner, said unlike the commercial farms, research farms are not required to get tested for THC content—which must measure below 0.3 percent to qualify as hemp. There's also little that's required of them to verify the validity of their research.

"That really tightens things up," he said.

As SLO County works on a permanent hemp ordinance to replace its moratorium before the next growing season, surviving farms like Natural Healing Center's on Los Osos Valley Road gear up for harvest. Delayed plantings caused by the unsettled regulatory landscape mean that the mature plants look smaller than usual, like tiny Christmas trees.

"Their field looks about as depressing as mine," noted Peters, who moved to Oregon to pursue hemp after striking out in California.

Peters predicts it could take a few more years for the new industry to find its legs.

"What this industry is going to be," he said, "we're all still figuring out." Δ