Photo Courtesy Of Unfinished Business BLAST FROM THE PAST The lockdown gave Unfinished Business time to excavate a track from the past, which will be included in an upcoming album called The Lost Tapes, but for now listen and watch "Guy Magnet ('65 El Camino)" on YouTube.

Local '60s-style rock band Unfinished Business, which formed in 2003, is best known for their cover versions of classic songs from The Beatles, The Beach Boys, The Doors, The Rolling Stones, and The Animals, as well as Motown hits from James Brown, Marvin Gaye, Wilson Pickett, and others. The group's song list is ridiculously long, as their website will attest, but like every other working band in SLO County, their gigs have come to a screeching halt. Cue silver lining.

"Back in 2004, [band founder] Ed Miller wrote a song in the style of the '60s called 'Guy Magnet ('65 El Camino),'" the band recently noted in a press release. "It was about his college-age daughter, Jennifer, and her experiences with her dad's '65 El Camino. The song was recorded by Unfinished Business a couple years later as a demo for original music that was needed to get a gig. Well, UB didn't get the gig and that song, as well as several more of Ed's original songs, have sat on the shelf, so to speak, ever since. A collection of these songs will hopefully come out on an album with the title, The Lost Tapes, later this year."

For now, you can hear and see the video for "Guy Magnet ('65 El Camino)" on YouTube, and it's totally worth a look. The narrative tale talks about how Jennifer found the old car embarrassing, but how everywhere she went guys would honk at her and give her the thumbs up because they saw the value in the old beater. The tale's a bit of a tragedy as we learn Jennifer got hit by another vehicle running a red light. She wasn't injured because, well, 2 1/2 tons of Detroit steel—but the El Camino was totaled.

The song takes a charming turn in the last verse as Jennifer now finds herself driving a Rav4, and surprisingly she discovers the guys are still honking and waving. It wasn't the El Camino after all. Turns out she's the "guy magnet." The song's sound and narrative arc is ripped right out of The Beach Boys songbook.

It features Miller on guitar and vocals, Jim Witt on bass, Terry Lawless on keys and backing vocals, Ben Davis on rhythm guitar, and David Hollister on drums. Miller's grandson, Caleb Deutsch, put together the accompanying video. The track and visuals will make you long for the idealism of the 1960s, when the biggest problem you had was finding a date to the drive-in.

Livestream concerts just keep on coming, and leading the way is Paul Irving of Big Big SLO, who started a subsection on his website called SLO House Party.

"It continues to build momentum and will now be streaming regularly every Friday, Saturday, Sunday, and Monday," Irving explained via email. "Working with the area's top talent, promoters, and production team, you'll find [it's] the [closest] thing to actually being there. Streams will feature high-quality audio and video, as well as an easy way to make a donation to support the featured musicians.

This week's Saturday concert will either be announced later or forgone, but on Sunday, May 17, from 1 to 3 p.m., the SLO County Stumblers and BanjerDan play a pickers' doubleheader from Pozo Saloon's Shelter Stage. Pozo Saloon's open for takeout!

On Monday, May 18, Beer at the Pier returns to Baywood from 5:30 to 7:30 p.m., but this time virtually on the SLO House Party Main Stage. "Local favorites B & the Hive will kick off the Summer Series," Irving said. "They've been getting their streaming act together and are sure to give us a great set."

All of these shows are free, with an opportunity to donate to the featured bands. Go online to slohouseparty.com and stream away! 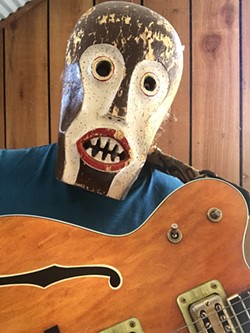 One of my favorite local singer-songwriters, Vincent Bernardy, whose NTMA-winning album Moonlight Dream Bed is still in my regular rotation, will stream live from his Instagram account, @vincent bernardy, on Wednesday, May 20, from 10 to 11 a.m.

"I'm just going for walks, making songs and art," Bernardy wrote via email. "I'm going to play some older songs and some new songs too. Also, I have Tracy Morgan on drums and Noah Coltin on bass."

Last month I told you about Cambria singer-songwriter Emmy "Fezt" Follett, who upon her return from a trip to Thailand while on her two-week lockdown wrote a song called "Quarantine" ("Local award-winning singer-songwriter Ted Waterhouse pens the tongue-in-cheek COVID-19 song we need," April 16, 2020). It was just her accompanying herself on guitar, but since then, the song has been professionally produced.

"We finished the 'Quarantine' song already," she emailed. "We produced it virtually by my friend who is a producer making the music with another friend who is a guitarist in Thailand and sent the music to me to record my vocals in the U.S. It's nice that we are able to produce music even though we are oceans apart. I think it's great that the modern technology allows people to connect in this pandemic."

Find the updated version on facebook.com/emmyfollett.

Have you ever wanted to learn to play guitar, piano, drums, or whatever? Well, while we're all trapped in our houses, now's the time, and stores like SLO's Grand Central Music and Conservatory continue to offer curbside pickup of music gear and online classes. Visit their website at grandcentralmusicstore.com. They have new and used gear as well as rentals. Who knows? You might come out of this pandemic a player!

Likewise, I got an email from Eddie Frawley of Morro Bay's Central Coast Music informing me that his store is also selling online now and offering curbside pickup.

"Our family hopes all is well with you and yours in these trying times," he wrote. "In response to the current worldwide crisis, and with a little push from a friend of mine, Central Coast Music is now selling online! Check out the website: centralcoastmusic.com. You can order and pay online and then pick it up at the store by appointment. The website will continue to grow each week, so check back often!"

Now more than ever our local music-related businesses need our support, and you would look totally rad with a sweet bass rig. Wear it low, play it fast! Δ