Join the ranks of the Guerrilla Gardening Club

Who knows? Maybe you are the next Guerrilla Gardening Club chapter president of your community? No oath, uniform, or bake sale sign-up required. Just come as you are. Information is available at mbggc.blogspot.com or by visiting the group on Facebook.

We've all seen it. A browning, neglected strip of bushes languishing in the sun near the freeway onramp; an abandoned raised bed wilting in a public park; a patch of earth scattered with trash sitting unused near a government building.

While you or I might see another depressing eyesore or the reality of our ever-expanding concrete jungle, a guerrilla gardener sees something entirely different.

I'm late for the Morro Bay Guerrilla Gardening Club's free, community potluck, but not too late for the social meeting, which is unfolding near the bluffs on a cool, bright weekday afternoon. Here, the group and its unofficial mascot—playful puppy Koa—chat, laugh, and talk plants.

These welcoming folks of all ages and backgrounds—led by group founder Taylor Newton—love regaling newcomers with their triumphs and tribulations. And oh, there have been many in the past seven years.

First, a quick definition of "guerrilla gardening." Put simply, it is the act of gardening on land without legal rights to cultivate, such as abandoned sites, areas that are not being cared for, or private property.

It encompasses a diverse range of people and motivations, and each club—and there are many across the world—is as diverse as its members.

The Morro Bay group, which Newton founded in 2010, has evoked change in more ways than one. The nonprofit has partnered with the city to maintain public spaces, water greenery, and plant new growth (for years, Newton grew a small nursery on his own land).

They've taken trips down to LA's skid row to help beautify the grounds and inspire residents, they've spawned chapters around the world, including Italy, and they've helped events like the Avila Oyster Festival work toward zero-waste success.

Perhaps most importantly, this ragtag family of friends has changed lives by maintaining an inclusive group that fosters self-esteem and a sense of community for its proud misfit members. 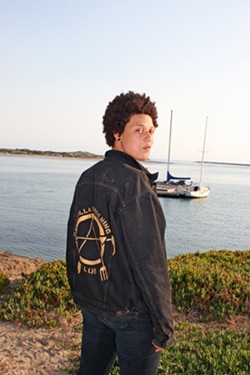 "Before we became a nonprofit, we created Guerrilla Gardening to protect ourselves from profiling. It's amazing to think, but in 2009, it was illegal to skateboard on the streets of Morro Bay," Newton said. "Kids kept getting pulled over for skateboarding and asked if they had drugs on them, searched. When you are a victim of profiling, you start to see yourself in that light. That's not fair, and we didn't want that for our youth."

"It was important to be public about this, to become a visible service club," Newton said. "From there, other chapters rose up. We designed the nonprofit to be replicated."

Although what the group does can be seen as a pretty good thing (who doesn't want to see more blooms and fewer cigarette butts and Taco Bell wrappers?), resistance is part of the gig.

Last year, for example, the city of Morro Bay removed elements of a miniature "public pocket park" that the group created on a city-owned lot that previously housed two dilapidated—then demolished—apartment buildings. Just like that, out went the picnic benches, turning the space (which includes cut flower beds, a mini fruit tree orchard, and irrigation system) into a monument, not a meeting place.

"The words the city used were, 'People are welcome to come to the park to appreciate its horticultural beauty, but we would like them to keep moving,'" Newton said with a wry laugh.

Sarah Hart, a dedicated member since 2013, talks to new recruits and spreads the Guerrilla Gardening gospel. She tells me about "the cactus wars," when the group filled empty tree-wells with cactuses to force the city to plant needed trees.

That time, the club won out.

On this day, there's no such drama, just upkeep. Backdropped against the blue bay, the group is watering the succulents they planted some years ago. We're at the start of the Morro Bay harbor walk, which runs from Morro Rock to the Embarcadero. The city's famed smokestacks tower on the horizon while Hart plants a shard of cactus in rocky soil.

A massive water receptacle with the club's logo—complete with anarchy sign—sits in the back of Newton's truck, and the gang takes turns filling up plastic jugs.

With the blessing of the city, the water was procured from Shasta Street Park and will go toward keeping this slice of Morro Bay a little greener.

Barbara Aston, a new Morro Bay resident (and, I should say, mother of the Transplants' Skinhead Rob), joins to help pick up cigarette buts.

She said the group gave her strength and "saved her" after the tragic loss of her daughter and husband. Another member, Justin Porter, says he was homeless and aimless before he joined up.

So far, Newton said he's surprised more local groups haven't sprouted up. It doesn't take a ton of effort to organize a few outings a month, and how many clubs can both help plants—and people—flourish?

"There's still so many of us that live outside of the box, yet still want to perform service in our communities," Newton said. "Where is an alternative, no-rules service club? There wasn't one, so we started it." Δ

Hayley Thomas Cain isn't afraid to plant seeds. She can be reached at hthomas@newtimesslo.com.