Unsheltered in place: San Luis Obispo's housed population is staying home during the pandemic, but the unhoused are being asked to move

In the four years that Paul Andreano has been working with people experiencing homelessness in San Luis Obispo, he's witnessed and heard about too many homeless camp cleanups to count.

As a volunteer with Hope's Village of SLO, a nonprofit that advocates for people experiencing homelessness, Andreano said he helps distribute roughly 1,500 pounds of food to about 150 people a week. One week he'll hand out food and supplies in notoriously popular locations—under the Higuera Street Bridge, in Laguna Lake Park, on the edges of the Bob Jones trail—only to find the next week that everyone and everything had been cleared out suddenly. 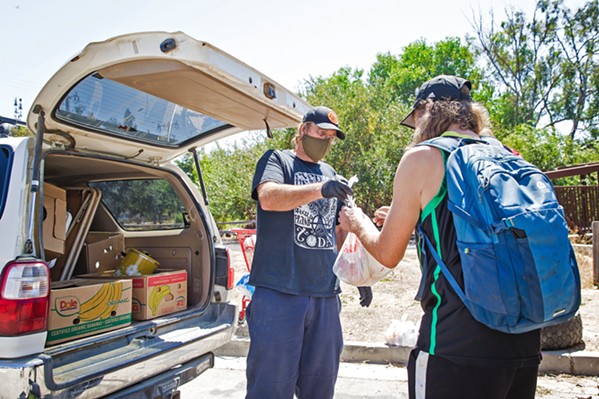 Sometimes the homeless population's moving along happens more slowly. City officials or police will come beforehand to warn people that they should leave, or they'll gradually close portions of a park or trail to discourage staying overnight.

Even when the people are forewarned, Andreano said dispersing a homeless camp is disruptive. People often can't carry everything they've collected, so they have to leave behind essentials like tents, sleeping bags, and cooking equipment. Then they have to find new places to stay, or risk getting ticketed or picked up on a warrants and thrown briefly in jail—none of which are great options during a pandemic.

Despite Centers for Disease Control (CDC) guidance that homeless encampments should be left alone during the COVID-19 pandemic, camp cleanups continue in SLO. Andreano pointed to May 18, when city officials and police officers forced dozens of individuals living in a camp near the Bob Jones Trail to move so that human waste and trash could be removed. It was a week after the CDC updated its guidelines for addressing homelessness during the pandemic, stating that people living in homeless camps should be allowed to remain where they are to prevent further spread of coronavirus.

"To us," Andreano said, "it was flabbergasting that they chose that point in time to disperse all these people."

While some camps have been largely left alone since March, smaller cleanups and dispersals continue. Andreano said he's heard complaints about homeless people getting pushed out of Meadow Park, and on Aug. 23, volunteers witnessed police clearing homeless people out of Mitchell Park, which is popular for its bathrooms and the shelter of its gazebo. Despite the cleanup in May, there's a new camp even deeper into the Bob Jones Trail. 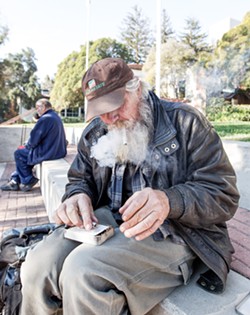 The establishment and later cleanup of encampments is an age-old cycle in SLO, but Andreano said it's being compounded by COVID-19. The unhoused people who can't or don't want to get into a shelter—whether because of addiction, mental illness, pets, possessions, independence, and now fears of catching coronavirus—create a home on city or county property. Trash builds, officials get complaints, the camps are cleared out, and then people rebuild similar homes elsewhere.

With the possibility of a COVID-19 outbreak in the shelters and housed residents spending more time outside in parks and on trails, the stakes are higher.

"We find ourselves at odds with the city all the time because we serve a population that's not being acknowledged by the city: the chronically unhoused," he said.

As the housed are being encouraged to stay home as much as possible to limit the spread of COVID-19, Andreano said, the unhoused are still being pushed out of the only homes they have.

According to CDC guidelines regarding homelessness during the pandemic, local governments should focus on improving sanitation—providing water taps, hand-washing stations, restroom facilities, and bath tissue—for those living in existing homeless camps. Unless individual housing options are available, the CDC guidance says unsheltered people should be allowed to remain where they are.

"Clearing encampments can cause people to disperse throughout the community and break connections with service providers," the guidelines read. "This increases the potential for infectious disease spread."

While city officials say there are beds available at the 40 Prado Homeless Services Center, Andreano said there are reasons why a homeless person might not want to go into a shelter, first and foremost being coronavirus.

"A lot of shelters have had serious outbreaks," Andreano said.

In a report published by the CDC in April, researchers found that among 19 homeless shelters in Seattle, Boston, San Francisco, and Atlanta, roughly 25 percent of residents had tested positive for COVID-19, along with 11 percent of staff; more than 100 people in a single shelter in San Francisco tested positive.

But 40 Prado hasn't had a single case of coronavirus since the pandemic's start, shelter staff confirmed on Aug. 28. So while SLO City Manager Derek Johnson said he understands the concerns surrounding entering a shelter now, 40 Prado really is the best place for people in need. Its staff are following safety protocol, he said, and clearly doing so successfully.

Johnson said there are always individuals who refuse to go to 40 Prado and prefer to set up camp elsewhere. For now, Johnson said the city's official position is to leave camps alone when possible during the pandemic.

But ultimately, he said, "Parks aren't there to live in."

When the city starts getting complaints about trash piling up near a trail, erratic behavior near playgrounds, used needles and broken glass left in the grass at parks, fecal matter in public spaces, that's when SLO Police Capt. Jeff Smith said the city has to step in.

"The park is there for everyone to use," Smith told New Times. "With the parks, we do try to at least keep them manageable so families and kids and parents can use and enjoy those things."

Homelessness isn't and shouldn't be a crime, Smith said, but when homeless people are littering, urinating, drinking alcohol, and doing drugs in a public park right next to a playground, it becomes problematic. That's especially true now, he said, when so many people are using parks and trails to get out of the house.

"We have to move them along and take care of what most people expect us to take care of," Smith said.

In an attempt to help keep camps as clean as possible, Director of Public Works Matt Horn and SLO City Councilmember Andy Pease teamed up to put two large dumpsters near homeless camps on the Bob Jones Trail and Prado Road. They're emptied every few weeks at a cost of about $1,000 a month for the city.

Hand-washing stations and public porta-potties have also been installed throughout the city, and though they're not necessarily in homeless camps, that provision generally aligns with the CDC's guidelines.

The county also opened several safe-parking sites in late March, where unhoused people could sleep in their cars and access showers and bathrooms. When that program ended in June, SLO city partnered with the county to expand 40 Prado's already existing safe-parking program during the pandemic.

So Smith said the city is doing whatever it can to adhere to the CDC's pandemic guidelines and help people experiencing homelessness however possible.

"Those are recommendations," he said. "They're not laws or anything we're held to or required to do.