Within the last few years, Santa Maria resident Mike Brown has ordered hundreds of items from Wish, an e-commerce platform where Brown said you can order pretty much anything at lower than market rates, so long as you're willing to wait longer than usual for shipping. 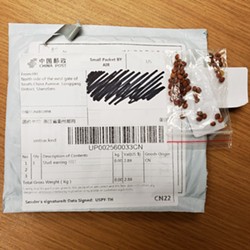 Brown's past orders through Wish have all come without issue, until a few months ago when he ordered some seeds for his garden. He received a package in the mail in early July. He assumed it was his Wish order, and set the package aside. Weeks later, he saw a story about mysterious packages of seeds from China showing up on people's doorsteps. When he gave his package a closer look, he realized that, just like the other reported packages of seeds, his had what appeared to be Chinese writing on it and was labeled as containing "pumpkin stud earrings."

His actual order from Wish never arrived, and Brown said he plans to turn these seeds over to the Santa Barbara County Agricultural Commissioner as soon as possible. He's just glad he was too busy to get around to gardening last month, he said.

"It is definitely concerning," Brown said.

Brown is one of dozens of residents in Santa Barbara and San Luis Obispo counties who received unsolicited packages of seeds in the mail that appear to be coming from various locations in China. It's part of a nationwide trend that the U.S. Department of Agriculture (USDA) has been investigating since the end of July.

In a July 30 press release, the USDA confirmed that people across the country have received packages of seeds they did not order, and urged recipients to hold on to the packages, leave them unopened, and turn them in to their local agricultural departments for further investigation.

"At this time, we don't have any evidence indicating this is something other than a 'brushing scam' where people receive unsolicited items from a seller who then posts false customer reviews to boost sales," the press release reads.

The Santa Barbara County Agricultural Commissioner's office started getting calls about such mysterious packages early in the last week of July, according to Deputy Ag Commissioner Rudy Martel. As of Aug. 4, the office had fielded about 20 reports so far.

SLO County's Department of Agriculture had also received about 20 reports as of Aug. 3, and Deputy Ag Commissioner Edwin Moscoso said the calls are still coming in.

In both counties, residents are being asked to avoid opening, planting, or disposing of any unsolicited packages of seeds they receive. Recipients can either drop the packages off at a local ag office or have them picked up by a staff member.

"Just call us and give them to us," Moscoso told New Times.

Once local agriculture departments have collected the packages, they'll send them to the USDA for further investigation. Even if you've already planted or opened the seeds, you should still call your local ag department for further instruction, Moscoso said.

Although the USDA said in an Aug. 4 press release that there haven't yet been any reported human health risks associated with the packages or the seeds they contain, there are concerns that some seeds are invasive or exotic species that could be detrimental to native ecosystems throughout the U.S. There's no evidence connecting the seeds to agro-terrorism efforts, the USDA wrote in the release, and the seeds collected from 22 states thus far have been a mixture of varying species of flowers, fruits, vegetables, herbs, and weeds.

Moscoso said most of the packages that have gone through SLO County's Department of Agriculture contain a variety of vegetable seeds, including broccoli and kohlrabi. They're small packages, Moscoso said, and labeled as coming from varying parts of China—sometimes listed as vague regions and sometimes very specific addresses. Most packages, he said, are inaccurately labeled as containing jewelry or other miscellaneous items.

If you've received an unsolicited package, call the SLO County Department of Agriculture at (805) 781-5910 or the Santa Barbara County Agricultural Commissioner's office at (805) 934-6200. Δ