The right moment spent waiting, thinking, or reading at a coffee shop can feel like one’s own private universe—but of course anyone could be watching.

San Luis Obispo-based artist Julie Frankel is a self-proclaimed people watcher. Years ago when Frankel was a shy student studying graphic design, she found her studio too quiet to study in. So Frankel would head to coffee shops to work and found herself engrossed in people watching. At the time, she even did a series of mixed media portraits of people waiting on the subway. 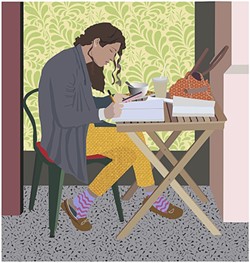 “I like the idea of being in public and in private,” Frankel said. “I’m a big fan of the third space. I find them to be very creative and inviting spaces.”

Frankel said while the first space is home and the second space is work, the third space is when an individual can have a bit of space that’s both personal and public. Think coffee shops, park benches, beaches, and waiting rooms. 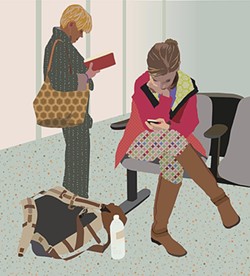 Frankel, who is originally from the East Coast, said that the new normal of posting everything from a new outfit to the morning latte on social media platforms like Instagram, coupled with the sunny California weather, has led to an abundance of fascinating people watching opportunities.

“We’re kind of in a golden age of people watching,” Frankel said. “The variety of style and personal statements that people make with their self-presentation has intensified.”

Frankel’s pieces start as a sketch in her notebook or a photo on her phone and really come to life on the computer, where she perfects them in Illustrator. Her work makes use of colors, patterns (often exaggerating their size and scope), and space, walking a line between realism and simplification. Frankel is especially intrigued by the little scenes she portrays because they’re so fleeting.

“The intersection between people and the places they occupy … there’s an incredible aliveness, but it’s also temporary,” Frankel said. “It’s a moment.”

While a clothing boutique may not seem like the norm for an art show, Frankel said she chose to have her work displayed there because such alternative venues tend to bring in a greater variety of people who may not have gone to an art gallery. And clothing happens to be a subject matter that she loves to play with in her pieces.

Frankel hopes that people who happen across her work in #peoplewatching might be struck by the relatable experience of a fleeting moment spent waiting, studying, or daydreaming the time away.

“I think it’s just an enjoyable series,” Frankel said. “I think that tension also exists on an emotional level. You can detect a backstory, but in many ways I’ve simplified it to something more archetypal.”

Ryah Cooley is eavesdropping on your conversation while sipping a chai latte at rcooley@newtimesslo.com.