Colon hydrotherapy is all the rage--here's the scoop

Okay, so it's not exactly Katie Couric getting a colonoscopy on national television, but if you believe the old wisdom that an ounce of prevention is worth a pound of cure, then colon hydrotherapy could prove even more essential than diagnosing a disease early. It's not a pretty topic, plumbing the bum. Perceived by some as being both physically uncomfortable and socially gauche, the subject could cast shadows on my journalistic ambitions, but it's only because I care about New Times readers that I braved the procedure myself.

The concept behind the practice is nothing new--think of it as an in-depth enema, which, according to the Association for Colon Hydrotherapy, peaked in popularity in the 17th century. 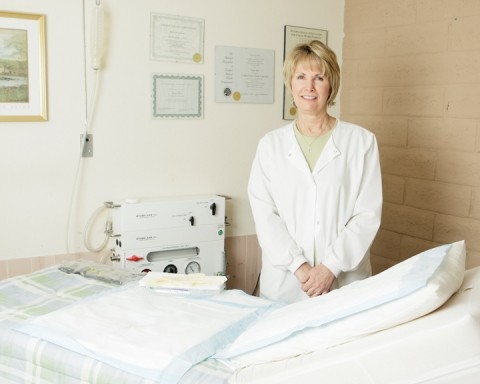 # Centuries later, many medical professionals are skeptical of colon hydrotherapy's actual benefits some go so far as to call it dangerous. The American Gastroenterological Association remains neutral on the subject--neither endorsing it, nor condemning it. Even without a formal endorsement, however, colon hydrotherapy--more commonly known as a colonic--is finding its way into mainstream health care. Some insurance plans will even cover the treatment.

The popularity of colonics is being propelled mainly by claims that--in addition to making you healthier, energized, relaxed, less toxic, and "regular"--colonics will help shed some pounds and flatten the stomach. Myth? Maybe, but that hasn't stopped movie stars from gushing about the practice.

Even on a more realistic plane, the health benefits that practitioners attribute to regular colonics are many. Pretty much all of them stem from a basic idea: that colons are essentially toxic as a result of bad diets, which can lead to poor or infrequent evacuation. Undigested food accumulates along the 5 1/2 feet of colon, the claims go, eventually causing toxicity that can spread and cause a host of different ailments. The colonic aims to remove that build-up by flushing the colon with water.

Sites like www.quackwatch.com state that such digestive cleansings are placebos at best and could even be dangerous, depending on how often they're used--and whether they take the place of necessary medical care. Still, almost all alternative health practices have their loyalists and detractors, sworn loyalists and avowed enemies.

The Central Coast boasts several homeopathic centers that can perform a colonic. I decided on Terry Baker, who runs the Internal Wellness Center in Atascadero. I met her over the phone, and she said that in addition to being a licensed vocational nurse, she has been doing colonics for about eight years and is certified with the International Association for Colon Therapy, or I-ACT.

After that, though, it got serious. The hospital gown with the open back made me a little nervous. Luckily, it was a short walk from the bathroom to a little table. The room was comfortable temperature-wise, and there were soft, simulated nature sounds

in the background. To me, that sort of designed serenity never bodes well--it's almost like a promise that something unpleasant is coming. Something like a tube up the butt.

Here's the biggest surprise: It didn't hurt, and it was far less invasive than other yearly exams I've been subjected to.

For anyone who read this far expecting to hear some gory details, I'm sorry to say: There aren't any. Basically, the tube goes up and fills the lower intestine with water for a few minutes, and then the soiled water comes back out. It's rinse and repeat as many times as you can for about 45 minutes.

Okay, even though I didn't see anything worth writing about, here's something for the gawkers: Baker said that people sometimes pass strange objects--such as pennies, marbles, and even crayons--that have been stuck in the dark reaches of the body, maybe since childhood. I fully expected a toy soldier or something to come out of me, but I wasn't so lucky. Apparently my colon is pretty healthy.

For scientific purposes, I can report that I did lose two pounds--is that even possible? My belly at least looked flatter, and I felt really high afterward. Not like being stoned and heavy--it was more like going for a jog and feeling surprisingly light afterward. Actually, I was buzzing. I had the compulsion to amend my evil ways, take up meditation, and eat better.

Later, I had some juice and a burrito, and forgot about all my good intentions.

But I am a believer--in colonics, and a lot of other holistic medicine. Not only did I feel great afterward, but days later, I was more conscious of the food I ate. And what came out.

Baker recommended that a patient come at least three times in about a week to get the full effect of the procedure, and then follow up with monthly or weekly visits. I may go back, I may not. I am a fan, but at $70 to $100 a pop, I don't know if my budget can handle it--especially if this story on my resume makes future editors question my journalistic career.