Glen On the surface, this is an effective psychological horror thriller, but look a little deeper and Peele has again made an astute sociopolitical commentary on America's haves and the have-nots. More on that later. This is also an homage to the mid '80s. The film opens with a commercial for Hands Across America, an actual fundraising effort in 1986 that raised money for homelessness by enlisting 6 million people to join hands across the continental United States. As the camera slowly moves closer to the tube TV screen, we see on a nearby shelf a VHS copy of C.H.U.D., the 1984 B-movie horror film about New Yorkers being snatched by something living in the tunnel system. It's subtle foreshadowing for what's to come and the bottom-dwelling "tethered," as the doppelgängers are called. Watching the TV is young Adelaide (Madison Curry), who we later see at the Santa Cruz boardwalk with her squabbling parents. She wanders off to the beach and then into a mirrored funhouse, where she encounters her doppelgänger. Traumatized, she's unable to speak. Flash forward to the present, and Adelaide, now married with two kids, is traveling with her family to their Santa Cruz vacation home, where they'll meet their somewhat richer friends the Tylers: mother Kitty (Elizabeth Moss), father Josh (Tim Heidecker), and twin girls Becca and Lindsey (Cali and Noelle Sheldon). Long story short, they're to meet at the beach, but Adelaide, recalling the trauma of her youth, is apprehensive. She reluctantly goes, and once there, her son Jason wanders off. She freaks out, and after he's found and they return to their vacation home, Adelaide confesses to her husband what happened to her as a child. He's incredulous ... until the family's doppelgängers show up outside the house, all dressed in prison-like red jumpsuits and wielding golden scissors. They stand silent, holding hands (across America?) and staring at the house before the action starts and they invade the Wilsons' home. There's a lot of creep factor, mildly gory but un-gratuitous violence, and unrelenting tension. What are you people, the doppelgängers are asked? "We're Americans," Adelaide's double, Red, replies in a croaking voice. Though not truly terrifying, the film works as a horror thriller, but it's got more important things on its mind than simply shocking viewers.

Anna This is my type of thriller, a slow simmer in many moments but a boil-over waiting just around the corner. Peele is more than adept at making his audience uncomfortable, and while Get Out and Us are very different movies, their unsettling nature speaks to his style. He worked with composer Michael Abels once again to create a haunting, taut background sound that fed into fear just as much as the creepy characters he created. The intruders are their otherworld counterparts, a twisted and dark version of them. While Red (Adelaide's other) has halting English as a way to communicate, the rest of the counterpart family seems to talk through screeches and bellows with each other. There's little doubt that their intentions are sinister; whether revenge or jealousy is the motivation is more muddled. Red's children are wild animals, and her lumbering husband, Abraham, is a zombie-like brute. This is one of those films that keeps falling into place long after you've walked away from the theater, the symbolism and message running much deeper than your standard horror flick. It keeps you on edge but rarely because of a jump scare—more so because the dark tension Peele has woven into every scene. It seems the doppelgängers have been biding their time below, waiting for a chance to rise and overtake the selfish, self-centered world above. The cast is phenomenal. It's no small feat to play two very different roles in the same scene. Us has garnered a lot of attention for good reason—this is one horror film that stays with you. 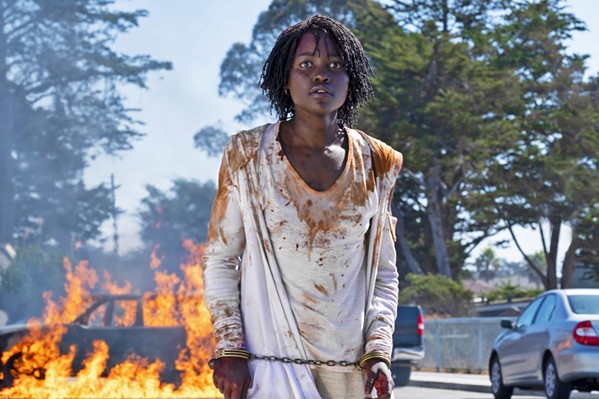 Glen The U.S.'s duality, divisive politics, income disparities, and dichotomous class, race, and gender dynamics are addressed here through the analogy between the surface dwelling haves and the below dwelling have-nots. It's a bit of a call back to the "sunken place" from Get Out. When the attacks start, we see bodies littering the streets as their "others" come to claim their doubles' place in the prosperous above-ground world. What's interesting is that the Wilsons are up to the challenge and give as good as they get, battling their doubles with ferocity. At one point as they're escaping from their friends' vacation house, they argue over who should get to drive based on how many kills they've made. It's wry, dark humor, but the larger point is that Adelaide, Gabe, Zora, and Jason are capable of violence. In other words, they're just like their doubles except they were born into prosperity while their doubles weren't. The ending—which I don't want to ruin for you—drives that point home again. The Wilsons are no better than their doubles; they're just luckier for their opportunities. Remember Childish Gambino's surprisingly deep video for "This Is America"? Peele's new film delivers the same sort of humor-laced gut punch. We're in a bit of a renaissance when it comes to art depicting American race and class inequities. From Get Out to Spike Lee's amazing BlacKkKlansman, we're seeing a calling out of America's original sin, which continues to haunt and demand a reckoning. "They're us," the Wilsons say about their own tormentors. They are indeed.

Anna The humor is a welcome element in Us, reminding the audience that beyond targets of their doppelgängers, they're a family with all the average American problems. Their teenager is phone obsessed, their young son a ball of energy, Gabe is sweet but dismissive, and Adelaide protective but—albeit rightly—paranoid. While it falls into the horror genre, Us is much more fluid than one word can contain. It's horrifying, yes, but in a much quieter way than you expect from a film labeled "horror." It's clever and uncomfortable. You are rooting for the good guys, but then you start to wonder about the real differences between good vs. evil. Are "the tethered" justified in the hatred of their more successful foes? They've watched for years as others have succeeded and thrived while they're forced under the world and into the shadows. There's a lot to unpack here, and admittedly a lot of insight came after time away from the film. Δ