Use martial arts to shape the mind and body

Before a small crowd of onlookers and guests at the Rising Sun Martial Arts Academy in Santa Maria, owner Jim Risinger puts on a demonstration with each of his students on Jan. 15. He pretends to strike the midsection of his students with his hand while they pivot, block, and counterstrike with their bokutos, or short wooden Japanese swords often used for training. The soft drone of chants radiates, from the speakers of a nearby stereo.

Through a series of mechanical, yet graceful, movements Risinger shows students how to defend against an attacker. And in the dojo, it’s merely practice, but the benefits of training go beyond the dojo’s mats. While martial arts are recognized globally for fitness elements and self-defense mechanisms, they benefit the mind as much as they do the body, according to Risinger.

“It’s not all about fighting and technical skill,” Risinger said. “It’s about polishing one’s heart and getting rid of ego-driven nature.”

In Risinger’s case, the practice of hand-to-hand combat goes beyond surviving the moment of an attack and into long-term survival, such as healing after a traumatic injury. Risinger credits martial arts for helping him get through a difficult part of his life following a car accident.

Six years ago, while he was on his way to a general contracting job, his work van was hit head-on by a box truck crossing an intersection. Even though the airbag deployed, the force of the hit gave him a concussion and a brain injury. Risinger said he lost a portion of his memory. To heal, he sought the ancient Chinese discipline of qigong taught by Master Zhou in Los Angeles. Risinger said the meditative practices of qigong helped him regain some of the memory he’d lost. 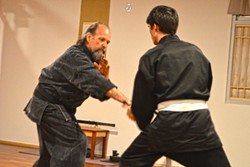 Although he didn’t want to get into specifics, Miyamoto said martial arts training also helped him get through a recent period of difficulty caused by some family medical problems. The benefit for him was spiritual as well as physical. Miyamoto said he lost 20 pounds after recently re-starting a tai chi routine.

Nearly anyone can join mixed martial arts training gyms for the benefit of discipline, toning up, and learning self-defense skills. But the knowledge is not for everyone, according to Risinger. Before taking on new students, Risinger interviews them individually to ascertain a certain level of maturity and respect. He also said that parents must be particularly mindful when it comes to teaching their kids martial arts.

“It’s like giving a loaded handgun to a kid with no responsibility,” Risinger said.

Other local experts agree. Black belt teacher James Reilly teaches Shaolin kempo karate to adults and children as young as 7 years old at Connect Fitness in Santa Maria. He said it’s important for an instructor to keep his or her eye on their students.

Reilly also agreed that martial arts training helps develop discipline, confidence, memorization skills, and a sense of accomplishment in anyone who gives it a shot. And for self-defense purposes, he calls it an “insurance policy.”

At its most basic level, even a little bit of martial arts training could equal safety against an attacker.

Camille O’Bryant, a professor who teaches psychology and sociology of sports in Cal Poly’s kinesiology department, taught women at the university simple self-defense tactics—known as Rape Aggression Defense—for three years. It was a non-accredited 14-hour weekend course she taught to students in conjunction with university police. The idea behind it was to empower women to find a defensive mindset, O’Bryant said, also indicating that the system was based partly on martial arts, especially when it comes to blocks.

“When I think about martial arts in the combative form,” O’Bryant said, “there will be some sort of blocking. Rape Aggression Defense does include those. It’s not really a martial art in the sense of karate. It’s a system of self-defense.”

O’Bryant also said that the system is not only meant for women, but for men and children as well.

Although O’Bryant does not teach the course anymore, a women’s self-defense course is occasionally hosted by the non-profit RISE (Respect Inspire Support Empower) center in San Luis Obispo.

But at places like the Rising Sun where more than simple self-defense techniques are taught and refined through hand-to-hand combat, Risinger reminds each of his students that compassion is important above all. At the end of each session, he gives everyone a hug.