In case the blood-orange sky and fine coat of ash on your car isn't a dead giveaway, what feels like half the state of California is currently on fire.

To make matters worse, the massive smoke plume from the nearby Thomas Fire in Ventura County has crept up the coast, making the air quality so bad that officials warned the population to stay mostly indoors. 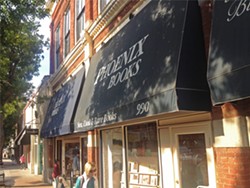 For me, being stuck inside means I get time to catch up on reading. I've been a bookworm since I first learned to read, and in those years I've found that the only thing better than siting down with a good book is going to a bookstore or library and picking out that next book I've just been champing at the bit to read.

While big chains like Amazon and Barnes and Noble make finding the exact book you want at any time more convenient than ever before, my all time favorite place to find new reading material has been and will likely always be a used book store.

This week, I blew the ash off my car and headed over Phoenix Books in San Luis Obispo, one of my favorite places to hunt down new reading material. As soon as I walked in and smelled the warm, slightly musty scent of old paper and cardboard, I knew that I'd come to the right kind of place. It's amazing to look at the stacks and stacks of books and realize that, at some point, each one of them passed through the hands of someone else. I ran my hands along the spines lined up on the shelves and wondered what curiosity drove the book's former owners to buy them in the fist place, and what eventually drove them to hand it over to be resold and passed on to someone else.

Inside Phoenix I took my usual route, making a beeline for the cavernous back room, where the literary fiction, Western, and science fiction is kept. I saw many titles I've seen on past trips, like a cool-looking set of Edward Gibbon's The Decline and Fall of the Roman Empire, worse-for-the-wear copies of pulpy outlaw Westerns from the 1960s, as well as oddities I'd either missed or were new additions, including a spiral-bound manuscript of Jono, a novel I've never heard of. The title page indicates it is an uncorrected proof of the 1970 novel that one Amazon review called "Mary Poppins meets Days of Wine and Roses," and I wonder how it came to end up on the shelf at Phoenix.

My trip to Phoenix usually ends in the same place, in front of the paranormal/new age section. Thanks to being an obsessive fan of Stephen King and The X-Files as a kid, I can't help but be drawn to books about Bigfoot, UFOs, or other kooky phenomena that lay between the pages of the yellowed paperbacks on that particular shelf. It's a guilty pleasure of sorts. It doesn't take me long to decide that Joan Didion and Cormac McCarthy will have to wait, and pluck a small paperback about the Bermuda Triangle off the shelf. At 250 pages, it's just long enough to get me through a day cooped up mostly indoors, and gives me the perfect excuse to venture back into that fascinating maze of books in search of new surprises. Δ

When Staff Writer Chris McGuinness doesn't have his nose stuck in a book, he can be reached at cmcguinness@newtimesslo.com.