It’s Sunday, Nov. 11, and I’m at The Z Club to meet and talk to members of SLO Tease, the local neo-burlesque troupe that formed about a year ago and is about to embark on its third series of shows next weekend. 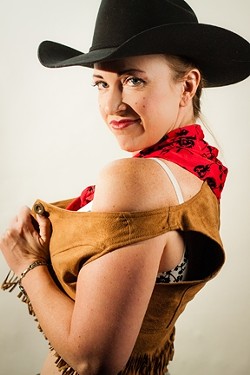 It’s just a rehearsal, but the place is buzzing with activity. People are loading equipment in, workers from lighting design company Ethereal FX are adjusting lighting, and director Laurel Mitchell is doing her best to organize this three-ring circus.

For the uninitiated, burlesque is defined as a performance that caricatures the spirit of a serious work by the ludicrous treatment of its subjects, which is why when I ask Lauren if her new show is “seedy,” she says, “I wouldn’t say seedy. It’s more sexy and funny and everything it should be. It’s fun!”

It’s also important to know the difference between strippers, who remove most or all of their clothes, and burlesque artists, who may strip off some layers and expose plenty of leg and some boobage, but nipples are covered and more of the bottom is covered.

If you got booze, as The Z does, no G-strings, dig?

Their first show a year ago was one night, and they packed the 100-plus capacity club with mostly their friends. The next time they staged a show, they went for two nights and again sold out both shows due to word of mouth. This is their first time actually trying to get some publicity, and they’re mounting the show for three nights. Tickets are already going quick!

Executive producer Rick Castello breezes in the front door wearing a tuxedo T-shirt, a black skirt, and those glove-like shoes that have little pockets for each toe. Fancy!

I gotta ask him, “What do you say to critics who claim that burlesque is an exploitation of women?”

“I tell them to come see the show and they’ll see it’s a celebration of women—and we have a guy, too,” Rick counters.

“We do exploit him,” Laurel quips.

“No, we don’t exploit him … publicly,” Rick shoots back.

Rick explains how this is a labor of love, that no one’s paid, that money collected at the door goes for better costumes and props. He says he’d like to take the troupe to L.A. and “see how they measure up” to burlesque shows down there, but his main goal is “to see we have a full house every night” of their upcoming three-day run.

“I want to make art that isn’t afraid of the human body,” he says, explaining part of his motivation, and then he introduces me to Celeste, one of the performers who explains how she was a cheerleader in high school, got into ballet and jazz dance after high school, and now enjoys doing choreography.

“I was looking for a new creative outlet,” she says of her entry into burlesque, and then she tells me a secret: “I hate being in a bikini on the beach, but give me some dim lights and a character to play … .”

Then she’s happy to show off her body.

“It’s not stripping,” she says. “It’s completely different. I think there’s something demeaning about stripping, but this is about being strong. It’s empowering.”

Next I meet Lauren, not to be confused with Laurel. Like Celeste, Lauren just goes by her first name, and surprisingly, her background is as a musician, not a dancer, but she gets up there and struts her stuff anyway.

“Well, I did do some ballroom dance,” she says. “I’m friends with a lot of the dancers, and we go to the same social functions. I didn’t do the first show, but I watched it and that made me want to do it.”

Lauren joined up for the next round, so this upcoming trio of performances will be her second set. Does she get nervous?

“Oh yeah, I get really nervous, but with the amount we practice, we don’t have to worry too much about the dance, and we can focus on having fun,” she says. “That’s what the audience loves, to see us having fun up there. The sexiest thing.”

Finally I meet John, the male burlesque dancer, and I ask him how he’s received when he performs.

“So far everyone’s loved it! Some have told me my performance was their favorite. It’s about being sexy, showing off your body, and having a good time. The guy stuff needs to be sillier, so it’s funny comedy combined with everything else. People love it!”

Back to director Laurel Mitchell, who tells me they’re always looking for new performers. She sums up the performances like this: “People should know it’s completely lighthearted and a lot of fun. I love creating and performing and doing things a little outside the norm, and it’s great to hear people saying they’re so glad there’s something like this.”