When Grover Beach chiropractor Daniel Bronstein describes the conditions outside his clinic on 9th Street and Grand Avenue, the picture isn’t pretty.

“I’ve found all kinds of things outside,” he said. “I’ve found human excrement on my property.” 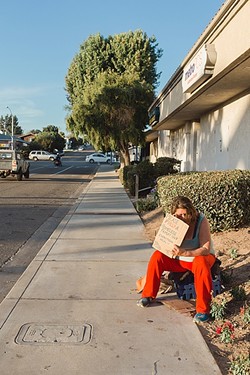 It was just one of many concerns he relayed to members of the Grover Beach City Council at a recent meeting. Like many business owners, Bronstein is worried about problems caused by vagrants, panhandlers, and homeless individuals congregating on and around Grand Avenue, in what is essentially the commercial core of the city.

“I’ve been here since 2011, and we’ve always had issues up and down the business corridor,” Bronstein told New Times. “It’s always been pretty bad.”

Bronstein has a laundry list of problems he said are a result of a sizable population of homeless people and vagrants in the area. Lately, he said he’s witnessed shouting matches and physical fights in broad daylight. He said he’s had some individuals barge into his office. There’s been more than one morning when he’s come to work to find someone sleeping on his steps. Not to mention the trash, which he said could be anything from hypodermic needles to human waste.

Bronstein isn’t the only business owner in the area who’s had these problems. Andrew Turner has owned a salon in the nearby Ramona Shopping Center for more than 11 years. He too worried that the issues he was seeing—the fights, the disruptions, the trash—were making customers feel unsafe.

“I’ve witnessed some pretty violent fights. There’s still a lot of begging and public intoxication,” he told New Times. “I’ve had to walk clients out to their cars.”

Like Bronstein, Turner showed up at the City Council’s Oct. 19 meeting to bring the issues to their attention during the public comment period. It wasn’t the first time the council heard complaints about collateral damage and disruption due to homelessness and vagrancy in the city, and the business corridor specifically. In fact, the council attempted to address the issue earlier this year by passing an ordinance against aggressive panhandling.

While the ordinance was passed with the hope that it would cut down on citizens and shoppers being aggressively accosted for money, some business owners didn’t feel it went far enough. That sentiment remains in the months since it was passed. Bronstein said the new rule failed to address issues outside of panhandling.

“The ordinance wasn’t something we all agreed on,” he said. “We were unable to pass an ordinance that would prevent loitering.”

Shortly after Bronstein spoke at the Oct. 19 council meeting, Grover Beach City Manager Robert Perrault indicated that he believed the new ordinance was making a difference.

“That seems to be working,” he said. Perrault added that the Grover Beach police had also stepped up foot patrols in the business corridor area, and there were plans to add monitoring cameras in the area as well. While Turner, Bronstein, and a third individual all spoke to the council and raised concerns, Perrault said calls to the police in the downtown corridor hadn’t gone up, according to the police department’s data.

“As of yet, calls for service have not increased,” he said.

By all accounts, the city’s police are doing what they can to tackle the complex problems of homelessness and vagrancy in Grover Beach. Police Chief John Peters said that in addition to the panhandling ordinance, there are also state trespassing and vagrancy laws, but he noted that those laws were generally enforced by the property owner, who has to make the complaint to the police.

He also said the downtown foot patrol program was still active, but its responsiveness depended on the manpower available at the time.

“It’s an overtime detail that the officers can sign up for,” Peters said. “We try to staff it with one officer per day, per week, but regular patrol coverage comes first.”

Like Perrault, he also mentioned the city’s use of monitoring cameras. Peters said that cameras were already in operation at Ramona Park and near the city’s train station, both spots where homeless people congregate. He added that additional cameras would be installed in the business corridor in the coming months.

In the end, though, Peters said that the police department is playing just one part in tackling homelessness, and the challenges it brings, in the city.

“We try to let everyone know that being homeless is not a crime, and that this isn’t a situation that we can arrest our way out of,” he said. “This is a problem we have to solve in partnership with the community.”

That partnership includes trying to get homeless individuals, some of whom suffer from drug addiction and mental illness, the help that they need.

Few know more about the challenges posed by homelessness in Grover and its neighboring cities than Janna Nichols, executive director for the Five Cities Homeless Coalition. A combination of lack of financial resources, high housing prices, and a lack of overnight shelters in the Five Cities area hasn’t made the problem any easier. Grover Beach, with its close proximity to the state park and some unincorporated parts of SLO County has long struggled, she said, but noted the problem extends far beyond Grover, Five Cities, and even the county.

“If you ask me, we are challenged here in California with a national problem on a local level,” she said.

Finding the answer to Grover’s problems—whether it be stricter enforcement of local laws, adding more laws, continued outreach for social services for the homeless, or a combination of all three—will likely not occur overnight. But waiting too long could also hurt the city, as some businesses owners may consider moving elsewhere.

“It’s getting worse,” Turner told the council members at the meeting. “I have a location in [SLO], and I’m thinking about moving up there.”