Local investigators continued this week to hunt for the individuals characterizing their actions as hate crimes responsible for two church vandalisms in the early hours of Oct. 4. 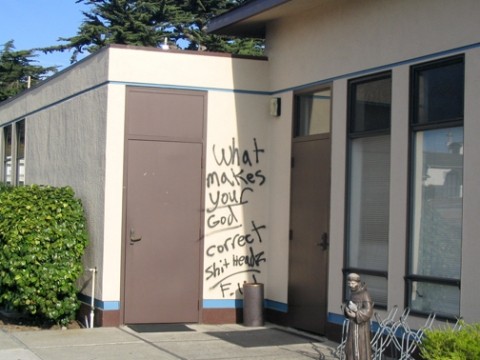 # Parishioners and staff of Calvary Baptist Church in San Luis Obispo and St. Elizabeth Ann Seton Catholic Church in Los Osos discovered anti-religious statements scrawled in spray paint on the outside walls of both buildings. The messages also contained slams against the Pope and, according to SLO police, President Bush.

San Luis Obispo Police and the county Sheriff's Department launched a joint investigation into the pair of incidents. So far, they've named no suspects, but reported a few leads. Due to the political nature of both sets of messages and the common language used, detectives believed that the two acts might be related.

"We're asking for the public's help for any information that might help in the investigation," county Sheriff's Sgt. Brian Hascall said.

As to why the vandals would have decided to hit two seemingly unrelated churches of different denominations in different cities, investigators weren't quite sure.

"Church graffiti incidents around here are so rare," San Luis Obispo public information officer Dan Blanke said. "To have two happen in one night it's unusual enough to lead us to believe they might be connected."

The vandals at St. Elizabeth defaced the sign in front of the building on Palisades Avenue and scribbled affronts against Christianity and religion in general. "Fuck the evil pope," was transcribed on the door. Messages reading "God kills, so follow him" and "What makes your God correct, shitheads?" covered the walls.

By Friday afternoon, all the graffiti was painted over. Initial damage estimates at Calvary Baptist stood at $6,000, while St. Elizabeth spent about $7,500 to clean up the parish and provide additional security.

"God is in control of everything, even what seems negative on the surface," Calvary Baptist pastor Randall Shanks commented. "It's obviously disconcerting, but we're thankful it wasn't more extensive. There are churches being burned in the southeast."

SLO Police would not release the specific contents of the messages at Calvary Baptist, claiming that exposing the information might compromise the investigation. Police indicated that an analysis of the style and messages could trigger more leads. As of Wednesday morning, the lead detective was out on SWAT training and unavailable to comment on specifics.

"Along with a few other people and the vandals themselves, we were the only ones who knew what it said," Blanke said. "We didn't want too much out there."

Police plan to pursue hate-crime charges, in addition to felony destruction of property. Legislation defines a hate crime as an offense against person or property motivated by race, ethnicity, disability, sexual orientation, or religion. It doesn't cover controversial presidents or pontiffs.

Leaders of both congregations regarded the vandalism as an attack on ideology and not a specific affront to the individual houses of worship. Shanks called the two churches "a convenient target" for people lashing out against the faith. As a result, the congregations went about their regular business over the weekend, rather than dwelling on the vandals' efforts.

Still, some in the religious community called the lack of dialogue following the incidents an indication that the general public doesn't consider acts against Christian organizations true hate crimes compared to, say, the public defacing of a mosque.