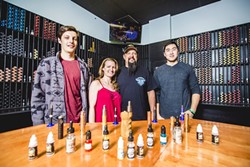 At this point in time, we’re all well aware that vapor rooms are the latest craze, and if you haven’t heard yet, the Central Coast has officially been impacted with our own shop that offers this alternative form of smoking. Blue Sky Vapes is completely dedicated to selling strictly vapor products.

Vaporizing is significantly better than regular cigarettes. It’s simple, just Google it, or better yet, head into Blue Sky Vapes and speak to owners Frank and Kristie Compston.

The idea to open a Vapor Shop in SLO County was not an easy task for them. First, Compston had to decide to give up his own cigar smoking habits before he even considered a shop. The inspiration behind it all was his son, who had quit chewing tobacco, and altogether ended up quitting smoking, thanks to vaporizing. Once Compston’s son was on the path to quitting, he suggested the same for his dad. Frank was smoking cigars regularly for about six months when he gave e-cigaretts a chance, and because of vaporizing, Frank has not had a cigarette in almost a year and a half.

Yes, e-cigarettes still contain nicotine, but only if you opt to purchase the nicotine filled tanks. Even if you decide to purchase those, they still do not have the same level of nicotine as most brands of cigarettes. Blue Sky Vapes does not carry any tobacco-filled products, just the nicotine tanks. The highest level of nicotine milligrams is 24, less than most major cigarette brands, and you can reduce the levels from there, which can lead to quitting. Blue Sky Vapes also offers more than 50 flavors of vapor, nicotine filled or not.

Frank has already heard a number of success stories that resulted from smokers switching sides. The e-cigarettes do not have an odor, no lingering smoke, and most importantly on many levels, does not contain carbon monoxide. All of Blue Sky Vapes’ liquids are made in a controlled lab environment, and when filtered through the chamber, do not release harmful metals like some do.

Blue Sky Vapes originally opened shop in Santa Maria and still has a location there. Just less than two months ago they opened their new location in SLO. In addition to the many flavors of vapor, they also sell starter kits, which has the tank, battery, and charger, as well as atomizers, accessories, and extra batteries. Pens start at $49, and go up from there.

Blue Sky Vapes does not just offer these products and a wealth of information, but also a lounge area if you wish to sit back and relax. Though the idea of a smoking lounge draws to mind those old smoke-filled bars of the ’20s where you can hardly see the band over your glass of brandy, Blue Sky Vapes is meticulously clean—to the point that I wouldn’t be surprised if someone went beyond the five-second rule if food were involved.

Saturday, May 10, Cuesta College will be holding its second annual 5K Run. The 5K is open to anyone ages 10 and older with a Cougar Kids Fun Run for those younger. Pre-registration ends on May 7, but registration will also take place on the day of the race. For more information and prices and times visit active.com, or call Jani Johnson at 546-3100, Ext. 2715.