One-of-a-kind performer Phil Lee is a character—the kind of guy who, when his wife Maggie tells him he needs a hobby, takes up knife throwing. The sort of fellow who has a hairless dog named Lucy, which he loves beyond reason. The sort of guy who climbs into his van and hits the road for months at a time, traversing the country and playing music for anyone who’ll have him and who’ll pay him. 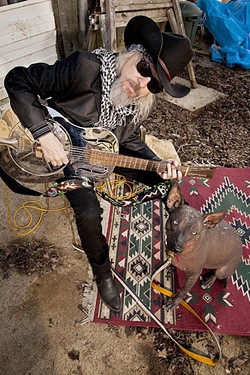 After spending nearly two decades in Nashville, Phil, his wife, and his dog pulled up stakes and settled in Arroyo Grande to be closer to their Cayucos vacation rental, which they occasionally are able to visit themselves. When we meet for coffee and I ask him how long he’s now been in SLO County, his response is classic Phil: “Three years … or physically about two weeks, because I’m always traveling.”

A raconteur of the first order, he’s got a story about everything, but today we’re talking about the 63-year-old’s soon-to-be-released fifth album, Some Gotta Lose, filled with his trademark alt-country and blues.

Phil got a call from singer-songwriter Willy Mason, who said he wanted “to produce a Phil Lee record.” Mason gathered a bunch of talented young players together and sequestered them all away for four days at Old Soul Studios in Catskills, N.Y., where they all lived and worked together under the same roof. After a couple days of rehearsal, the group dug in and recorded the 10 tracks live, resulting in a record that feels intimate, immediate, and spontaneous.

“These were young, talented players, and I think when they saw me they thought, ‘Didn’t this guy go down in a plane with Marshall Tucker?’” jokes the continually self-deprecating performer. “After it was all over, I didn’t know if we had anything or not, so I started sending it around and asked people, ‘Can we make anything out of this? I’m afraid to listen to it.’ And everyone who heard it said, ‘Yes!’”

The record is filled with amazing songs—mostly Phil’s originals, but also a handful of covers, something he’d never done before—and it sounds both old and new. 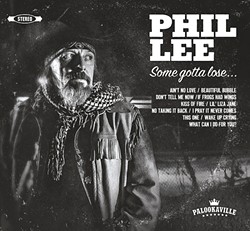 The opener, “Ain’t No Love,” which Lee co-wrote with Duane Jarvis, is a folk rock love song. “Beautiful Bubble” is a charming ballad that makes great use of Lee’s elastic Randy Newman-esque voice and sensibilities. “Don’t Tell Me Now” features one of those for-the-ages iconic choruses, made lush by a cadre of female backing vocals. “If Frogs Had Wings” finds Lee channeling Bob Dylan by way of Townes Van Zandt. Lee’s cover of Robert Hill and Lester Allen’s tango classic “Kiss of Fire” is a hoot. Lee follows with Cajun-sounding traditional “Lil’ Liza Jane,” a classic to which Lee adds choruses of his own lyrics. “No Taking It Back” is a cheating love song filled with all the passion and lamentation such an affair brings with it. Pat MacDonald’s “I Pray It Never Comes” also gets the Phil Lee treatment, conjured up as a back porch toe-tapper. “This One” is a warmly rendered “missing her” kind of song, full of heart and regret. “Wake Up Crying” has the sound and feel of a classic road song, the kind that gives you a heavy foot as you’re racing down the highway. It’s a damn fine album that closes with lead guitarist and vocalist Jan King singing a cappella “What Can I Do for You?”

“I knew when we were recording that it felt great,” Lee says as he sips his coffee and picks at his croissant. He penned his originals while touring in 2013 and ’14, where he went out of his way to visit “old haunts, the Hollywood places where I’d hang out or play, the New York dives that aren’t that anymore but high-end coffee shops where the price of a cup and a pastry is equal to the rent I was paying in 1973,” Lee writes in his liner notes. “The graves of dead ex-girlfriends. The White Horse Tavern. The apartment on El Centro. Barney’s. The Troub. Where this was. Where that was. Where we met. Where we said goodbye.”

Lee decided to release his new album warts and all, with no post-production wizardry to try to “fix” any problems, and to my ears, it makes it even better.

“Like the Grateful Dead, there are times when nothing’s happening,” Phil jokes. “You’re still playing, but … is it me? Do I jump in here?”

Such is the nature of live performance, especially among a group of musicians who are playing together for the first time. In fact, this record is so un-fussed with, the songs are merely in alphabetical order!

“A lot of thinking did not go into the making of this record,” Phil quips, adding with some seriousness that when he sent the album to Nashville to be mixed and mastered, the engineers said, “Nothing needs fixing.”

“Tim is a ‘t’ crosser and an ‘i’ dotter,” Phil says, “and I’m a ‘What’s the worst that can happen?’ kind of guy. Even when it’s a total disaster, I become an observer like everyone else and start thinking, ‘Let’s see how far down we can go.’”

Knowing his penchant for self-deprecation, I have a sneaking suspicion this show is going to amaze.