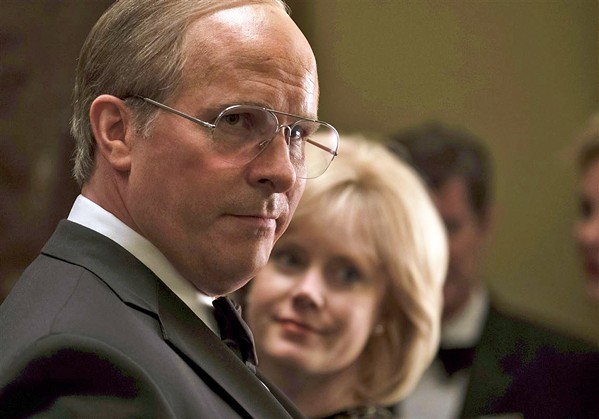 Glen On Jan. 6, Christian Bale secured the Golden Globe for Best Performance by an Actor in a Motion Picture, Musical or Comedy, heightening his chance to win a Best Actor Oscar. Bale deserves it. He disappears into performance as Dick Cheney. He nails Cheney's habit for talking out of the side of a subtle snarl, his lumbering and slouchy gait, and his measured speech patterns. It certainly helps that his makeup is transformative, but Bale deserves most of the credit for inhabiting Cheney's skin. You probably heard that Bale credited Satan for inspiring his performance, but in fact Bale's portrayal does a lot to humanize Cheney, who appears to love and respect his wife, Lynne (Amy Adams)—in a Lady Macbeth sort of way—and support his daughters, Liz (Lily Rabe) and Mary (Alison Pill), even when the latter comes out as gay. The film covers Cheney's life from his drunken and loutish youth through his Machiavellian turn as the puppeteer behind George W. Bush's presidency. What seems clear in McKay's interpretation of Cheney is that he was power hungry and believed the ends justify the means. Unnecessary war, "legalized" torture, bolstering corporations and the super rich—those are Cheney's enduring legacies.

Anna Bale's transformation is pretty astonishing. In fact, when I first saw the trailer for this, I didn't recognize Cheney as him until his name popped up. I was flabbergasted. Bale is known for his ability to transform physically for a role, and with a fantastic makeup team he continues to move the bar upwards as Cheney. I'm probably not alone in the reality that most of what I know about Cheney is from his time as VP, but this film delves into the making of the man, his shortcomings, his character, and his ultimate rise to and transformation of the job of vice president. While previously thought of—as Lynne describes—a "nothing job," the role of VP felt like a step down from his previous positions in government and as CEO of Halliburton until he realized he could take advantage of Bush's inexperience and take over key roles, along with the team he built including Donald Rumsfeld (Steve Carrell), Paul Wolfowitz (Eddie Marsan), and attorney John Yoo (Paul Yoo). Lynne is a force to be reckoned with in her own right, and Adams turns out a fantastic performance as the obstinate and focused politician's wife. Even though the film explores the deeply disturbing and often ugly "accomplishments" that Cheney made and his heavy-handed grasp at power, it manages to be funny and witty. It certainly reminded me of all the reasons I really don't like that guy, but it also presented a flawed human character who at times is as relatable in one moment as he is evil in the next.

Glen I have to hand it to McKay. He makes some bold and brilliant choices in this depiction. At one point the narrator (Jesse Plemons) is talking about Cheney's ability to make even the craziest ideas seem measured and reasonable thanks to his delivery, and then Cheney starts uttering the most ridiculous and absurd idea that breaks the reality of the scene. In another moment, the narrator talks about all the ways Cheney's vice presidency distorted U.S. foreign policy and then we're in a scene in a restaurant where the architects of the Iraq War are being told the various items on the menu, such as "extraordinary rendition." At another point we see Dick and Lynne in bed and they begin conversing in Shakespearian English, driving home the Macbeth idea. In the film's final moments, Cheney breaks the fourth wall, speaking directly to the audience. These are offbeat but spot-on choices that make the film come alive. It's worth mentioning that Rockwell as the bumbling George W. Bush is terrific. He really comes off as a buffoon who was unfit for office and ripe for manipulation. Cheney definitely ruins some reputations during his reign, most notably Condoleezza Rice (LisaGay Hamilton) and Colin Powell (Tyler Perry), who Cheney drafted into his Iraq War marketing. What a terrible moment in U.S. history, but what an entertaining look at those dark days. This is a terrific film.

Anna After Jimmy Carter is elected and Cheney loses his position as chief of staff, a false credit runs midway through the movie claiming Dick and Lynne retired and now raise show golden retrievers on their expansive lakefront property. It's an alternate reality to what actually happened and a pretty funny moment in the film. The narrator and his relationship to the story is a mystery at first, but it's a nice twist in the last stretch of the film, and Plemons gives a good voice to carry the storyline backward and forward through time. It's interesting as well as incredibly maddening to see the vast amount of manipulation and lies, cover-ups, and coercion that ran rampant in that administration and what a linchpin Cheney was in the whole operation. After the 2016 election and hearing, "But what about the emails?" over and over again regarding Hillary Clinton, then reading at the end of this film that the Bush administration "lost" 22 million emails, goes to show that people tend to only pay attention to the things that bolster their particular opinions or political leanings. Using an obscure interpretation of the Constitution's statement of presidential power, Cheney put his muscle behind the idea that if the president does it, it isn't illegal. It's a weird, twisty idea that the power hungry politicians still cling to today (Looking at you, Trump!). I thought Bale wholeheartedly deserved the Golden Globe for his performance, and I won't be surprised if he wins the Oscar as well. He's a studied and meticulous Cheney, and the cast around him does nothing but bolster the performance. This one was a win for me. Δ