Emily was searching for a movie at the redbox kiosk inside Scolari’s on a recent Friday night.

“I haven’t been to a movie rental store in about six months, and I don’t plan on going back,” she said. “Honestly, I couldn’t even tell you where one is. It seems like they’re all shut down.”

As she stared at the illuminated touch screen, she said, “I go here once every couple weeks. The movie selection in this thing isn’t the best, but you can find what you’re looking for without walking around an entire store, and you don’t have to deal with people.”

The way consumers rent movies has changed drastically over the past 25 years, and the shift has brought feast for some, but famine for many. Netflix and redbox have a chokehold on the video rental industry, and that death grip is affecting large-scale corporate chains—such as Hollywood Video and Blockbuster—all the way down to local small-scale video stores.

“I used to rent my movies at Hollywood Video in Los Osos,” Emily said. “I was able to get free rentals, and they had a huge selection, but they closed up.” 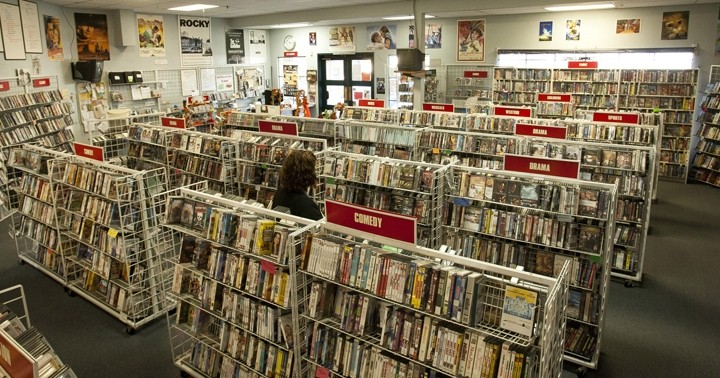 Today’s industry leaders have cut out interaction between the merchants and the customers, making the rental process just about as cognitive as operating a microwave. And it’s worked.

Once leaders and competitors in the industry, both Hollywood Video and Blockbuster filed for Chapter 11 bankruptcy this year. Hollywood Video, a subsidiary of Movie Gallery, Inc., closed a third of its stores and is attempting to restructure its debt, which is listed between $500 million and $1 billion, according to various industry news reports.

Blockbuster Video posted its highest number of store locations—a whopping 26,000—in 2002, but that number had dwindled to 14,000 by 2009. In a last-ditch attempt to compete with Netflix, the company established an online rental service that allowed customers to rent movies via the Web and return them to their local store. But neither tactic was immediately successful. With a mounting debt of $1 billion hanging over its head, by the end of 2010 there will likely be less than 3,000 Blockbuster locations in the country.

On the mom-and-pop side, Insomniac Video once occupied a small nook next to Fatte’s Pizza in San Luis Obispo. The independent video shop was beloved by many for its wide selection and unique genres. It typified the alternative, anti-corporate video store. But owners Bob Whiteford and John Jones closed its doors in October 2008, and Insomniac became a statistic.

Captain Jack’s Video & DVD, once located on Monterey Street, also bit the dust. Now two independently owned movie rental stores do business in San Luis Obispo: Crossroads Video and Studio Video. Despite the grim outlook for such small, local businesses, they cling to one distinct advantage over their main competition: the human element.

Crossroads Video, on the corner of Broad and Orcutt in San Luis Obispo, is owned by James and Diane Tomkins. When asked why she thinks the store is still in business, Diane said, “We have really loyal customers. We take orders, we copy family movies, we polish DVDs, and the customers have really gotten to know and like our employees.”

Today’s industry norms seem to suggest people would rather view movies online or have them spewed out of large, red machines than deal with other people. Simply keeping customers happy and satisfied from a human standpoint may be the key to keeping them away from the vacuum Netflix and redbox have placed over the industry.

Despite the impending doom many in the industry are feeling, some shops appear to be thriving under the harsh conditions.

“Business for us is actually not bad, despite people’s perceptions of the industry,” said Amanda Thurman, an employee at Video Palace in Atascadero. “With Hollywood Video closing, we were able to absorb some of their customers, and people seem to enjoy helping out a local business.”

Netflix, established in Los Gatos in 1997, started its subscription service in 1999 and now boasts more than 100,000 titles and a growing collection of media available to “watch instantly.” In 2009, the company achieved the milestone of more than 10 million subscribers.

Redbox, a company initially funded by McDonald’s and bought by Coinstar in 2009, came as an industry surprise, but quickly proved a success with its kiosk system. The company has flourished; in SLO County there are 46 individual kiosks, dwarfing the number of actual video rental stores.

Intern Jack Johnson can be reached through Executive Editor Ryan Miller at rmiller@newtimesslo.com.