Movies out of a storage bin just make you laugh harder

Not all movies require a multi-million-dollar budget in order to entertain. In fact, some of the funniest film footage ever made now resides in a barrel at the local thrift store or a forgotten box in the garage of a private residence. At least that’s the theory behind Joe Pickett and Nick Prueher’s Found Footage Festival, which will be making its way to the Palm Theatre Sept. 25 as part of the 2008 North American tour. 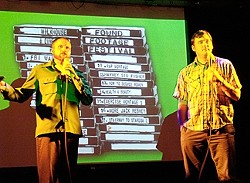 The duo found their first video in 1991, when Prueher, who was working for McDonald’s at the time, was forced to watch a video called “Inside and Outside Custodial Duties.”

“It was so stupid that he had to steal it,” explained Pickett. “They’re all so happy to be cleaning the floor. He took it home and we showed it to all our friends. We fell in love with training videos, so any time a really stupid one comes through, I would make a copy of the tape.”

Seventeen years later the corporate training video is a staple found-footage genre, along with rap, exercise, and promotional videos. Thrift stores and garage and estate sales are teeming with footage of celebrities sweating to the tunes of the ’80s—Pickett insists that nearly every celebrity has at least one—though one of the boons of the sort-of fame that the festival has achieved is that people are willing to sacrifice their videos upon the altar of absurd entertainment.

Fittingly enough, a trip to Alaska revealed a treasure trove of untapped resources.

“I recommend a trip to Alaska just to go to the thrift stores,” said Pickett. “You know, here in New York they’re all picked through. We had to check extra luggage we found so many videos.”

The only rule, which generally remains unspoken, is that the duo sticks to physical videos, eschewing Internet sensations like YouTube. Their artistic and cultural inheritance is not the technological explosion of the last 10 years, but the video-mad decade between the mid-’80s and early ’90s when it seemed like everyone had a video camera, and was willing to do something embarrassing with it.

The first festival occurred in 2004 as a fundraiser for a documentary called Dirty Country that they were trying to produce. They rented a venue on the lower East side—sometime between finding their first video and producing the festival they had moved from Wisconsin to New York—and completely sold out the space. A few similar such occurrences revealed that the Found Footage Festival had out-scaled their documentary. 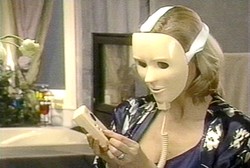 Format-wise, each showing lasts between 90 and 100 minutes and consists of an estimated 14 clips. Prueher and Pickett offer commentary about each clip, theories as to how and why it was made, information about where it was found, and general smart-ass comments. Their verbal tour of the footage marks an important distinction between the Found Footage Festival and watching videos on the Internet. Watching the clips as a group also adds to the appeal. And sometimes they’ll invite special guests, the people who starred in or directed the clips. Several of them, like The World’s Angriest RV Salesman, have become that special brand of celebrity famous for their lack of positive qualities—much like American Idol’s William Hung.

While filming an industrial video for Winnebago Industries in 1988, an RV salesman became frustrated when he flubbed his lines, descending into a state that Prueher refers to as “bat-shit insane.” He cursed, ranted, yelled, even inventing gibberish curse words.

For both founders, the festival remains a part-time job, something they’d like to see expand into full-time work; Prueher works for The Colbert Report and Pickett writes for The Onion. One of the primary obstacles between the festival as it currently exists and a development deal with a major network, like CBS, is the liability issues that accompany displaying found videos for financial profit. Thus far they haven’t received any complaints. In fact, people seem to revel in their minor celebrity status. 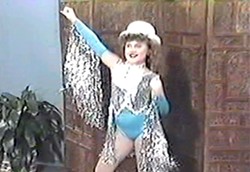 “We’re flying under the radar just enough that we’re not a threat to anybody,” explained Pickett. “And it’s not like we’re getting rich off this. We’re producing a different insight into this. Plus there’s the idea that you’re not supposed to be watching these; there’s a voyeuristic appeal.”

And while there’s an obvious element of social commentary, Pickett insists that he’s just in it for the laughs. Sure, it’s nice to deliver a few well-placed blows to corporate America, but the festival is, above all, an homage to humor.

During the first Found Footage Festival tour a bar in SLO happened to be one of the venues. It wasn’t an ideal place to show movies but the turnout was good so Pickett and Prueher ran a search for independent theaters in San Luis Obispo, and came up with The Palm.

For one evening, theater-going audiences in the vicinity of the Palm will have the opportunity to scratch their heads, laugh at people who have foolishly allowed their antics to be captured on tape, and ask—20 years after the RV salesman famously posed the same question—“What the fuck was that?”

The 2008 North American Found Footage Festival will be debuting at the Palm Theatre Sept. 25 at 7 p.m. Tickets to this one-night-only event cost $10. For more information visit www.foundfootagefest.com. The Palm Theatre is located at 817 Palm Street.

Arts Editor Ashley Schwellenbach once made a Star Wars video, but a geeky teenager ripped it off. Send tales of your embarrassing antics to aschwellenbach@newtimesslo.com.